Flicker is a powerful illusionist and budding sorceress. She is able to summon images from her mind that can affect anyone that sees them.

These images can be of anything she can imagine. These are more than just mere Illusions as she can give them a semblance of reality. The wall she creates would be solid, and the dragon she forms might actually have real teeth and fire breathing capability.

She was created by energies that were released by powerful magic wielding beings. As such she has an affinity for the magic of the universe. Flicker can tap into it and create almost any effect she desires.

The magical energy that her body was formed from makes her nearly immortal. Another side affect of these energies is she is difficult to detect with any sense other than the normal five senses.

She has a unique connection to nature. That allows her to speak with animals as well as plants.

She has spent her entire life with circus performers and learned a number of skills from them.

The suit she wears is constructed from advanced polymers. These are capable of withstanding most small arms fire. It is also constructed with an advanced secured radio built into it.

The suit is enhanced with bio-matter. It has a rudimentary intelligence and a low level telepathic ability allowing it to receive an image of what the wearer wants the suit to look like. It can then alter its appearance to match that image.

It is able to duplicate any type of clothing from a couture gown to hospital scrubs. But the volume of clothing has to remain about the same.

The young woman that would become Flicker, started out a mass of uncoalesced mystical energy. This force was left over from a battle between two powerful magic wielding entities. The energy existed for centuries without purpose, and then it somehow formed a consciousness. 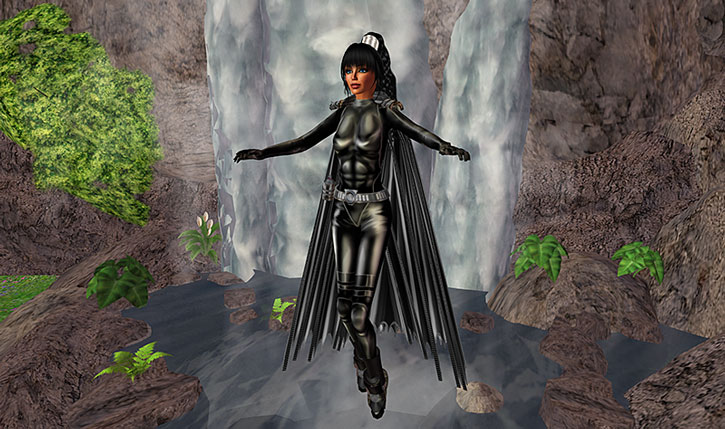 Another century passed until this consciousness came upon a middle aged woman. It sensed something in the woman, a sadness, and longing for a child. This longing was so strong that it caused the energy to take shape, forming the child the woman desired, and Flicker was born.

The woman, Esmeralda, found the child, which appeared to be a young girl of about five years old. She instantly felt a connection.

Esmeralda brought the child back to her husband. He owned and ran Vanlow’s Traveling Gypsy Caravan and Circus. He also felt the connection to the young girl, and the couple knew this was somehow their child.

They created a story that the child was Esmeralda’s sister, who had recently died. Vanlow used his contacts to have the proper paperwork created, and Ghel Luminitsa Petulengro was adopted.

Ghel was a very happy child, and adored by everyone in the circus. It did not take long to figure out the young girl was different. She seemed to have the ability to talk to not just animals but plants too, and seemed able to understand them.

Sometimes when she slept her parents would find flowers in her hair. When asked about the flowers Ghel would just say that the fairies brought them.

About a year after they adopted Ghel the first “Flickering” occurred. One evening while eating, Ghel became stiff, and started to flicker in and out of existence. This went on for several seconds, and when it stopped she appeared to have aged about two years.

This concerned the couple. But since Flicker seemed unharmed they associated it with her unusual background and left it at that. Life went on normally for Flicker, and then one year to the day of the first flickering she underwent another.

Again, when it was over she appeared two years older. Once again Flicker was not harmed by the ordeal so no one thought any more of it. Over the next four years there were four more such flickerings. Ghel, now called Flicker by everyone that knows her, appears to be a beautiful woman in her early 20s.

Flicker loved growing up in the circus and being around all the people in it. She was smart and gifted in ways no one understood. She could seemingly bend the universe to her will, and create anything she could imagine. She was also a magnet of sorts for all things strange. 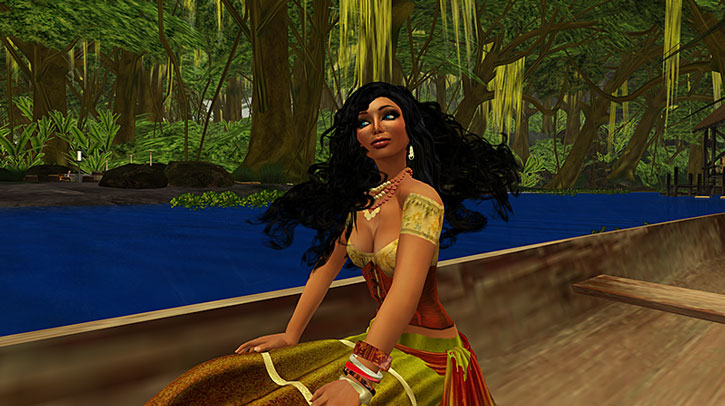 She had a group of whimsical creatures calling themselves fairies visit for a week (to the chagrin of everyone else). She has had spirits of long dead people come and visit, and an alien passing by that stopped to ask directions. There has been many strange and bizarre things, which the people around her seem to ignore.

She was always curious about what the other people in the circus did and spent time learning something from each one. The thing she really wanted to do, however, was a magic act. She asked her father if she could perform one in the circus. He agreed, but made her promise to be careful not to reveal her powers.

Thrilled, Flicker spent months learning how to do magic tricks, and to incorporate her magic into them. When she was ready she took the stage name, Flickr the Fabulous Illusionist. She started performing her unique illusionist act.

A group is formed

One day while Flicker was preforming, the circus was attacked by a group of men. She took cover behind some stage props and watched as a guy in the audience engaged the attackers. She watched as his clothing changed its appearance and him fire a beam of energy that paralyzed one of the assailants.

Deciding to help, she used her powers to disguise herself and joined the fight. The two heroes were able to drive the attackers off with little damage to the circus. After the fight the young man introduced himself as Philomath.

Once they had explained things to the sheriff, and the circus was permitted to leave town, Flicker’s father asked if Philomath would travel with them for a bit. 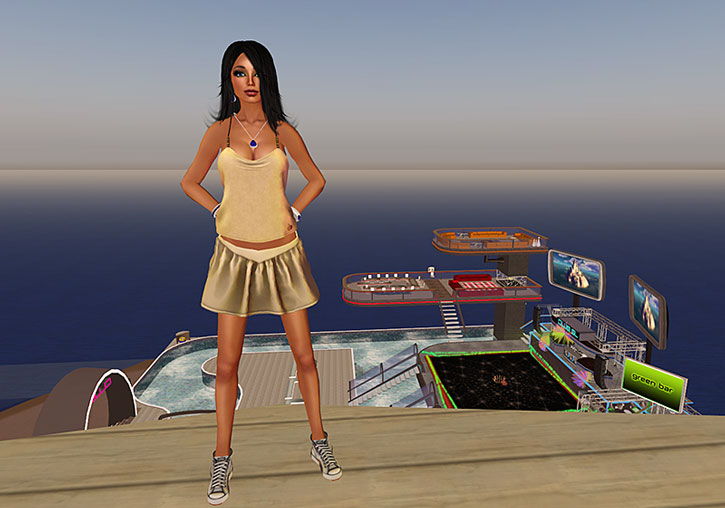 Philomath told them that there was times he was drawn to people and places for reasons he could not explain and felt that he was supposed to have found their group. Flicker’s father agreed and Vanlow’s Magic and More gained a new member.

The circus has since been joined by others with powers and has formed a group calling themselves Vanlow’s Defenders. They travel the world using the circus as a cover. Flicker has joined the group and continues to improve as she gains experience.

As the group grows in size Flicker hopes they can take on bigger and badder foes. In the mean time she will continue to wow the crowds with her stage show, and be amused by the strangeness that seems to follow her everywhere.

Flicker is a beautiful young woman of Romani descent in her early 20’s, with long black hair and piercing blue eyes. Her smile is warm and inviting.

While traveling she likes to dress comfortably in the latest fashions that woman of her age are wearing. When in character, or performing she likes to dress the part of a young prototypical gypsy woman, the way most people think gypsies dress, voluminous swishing skirts, gold bangles and colorful head scarves.

Flicker always seems thoughtful, kind and caring, almost to a fault. She believes in the inherent goodness of all creatures and seems hurt when this proves to be wrong. Still her upbeat personality prevents this disappointment to affect her for long.

She loves the action that adventuring with the other members of Vanlow’s Defenders provide, but finds it frustrating that the more experienced members sometime try to shelter and protect her.

She understands that her youth and lack of experience puts her at a disadvantage, but she is also confidant that the flexibility of her abilities help to compensate for her other shortcomings.

“Say hello to my little friend.” (as she creates something big, bad, and ugly)

“Who me, a super hero ? No ma’am, it’s not me. I spell my name FLICKR, she spells hers FLICKER. So you see, we’re completely different people.”

Flicker: “Alright sir, if you could please look in the hat and tell us what is in it. And could you please show the audience.”
Volunteer from audience: “I don’t see anything.” (he holds the hat up to show the audience)
Flicker: “Are you sure. Would you mind taking another look ?”
Volunteer from audience: “Well I’ll be…” (pulling a stuffed rabbit from the hat)

Equipment:
ADAPTIVE MATERIAL COMBAT SUIT [/BODY/ 08, Chameleon: 07, Radio Communication: 13, R#00. Bonuses & Limitations : Chameleon is limited to modifying the appearance of the suit rather than the wearer (-2) Radio Communication is scrambled (+1)].

To use the Sleight of Hand subskill the character makes a skill check with AP’s of Thief (Sleight of Hand) as AV/EV vs the targets Int/Will as OV/RV, RAP’s indicate the attempt was successful.

This would be for an object roughly the size of a 1” ball or a quarter, larger and smaller items will modify the OV/RV as the GM feels appropriate. 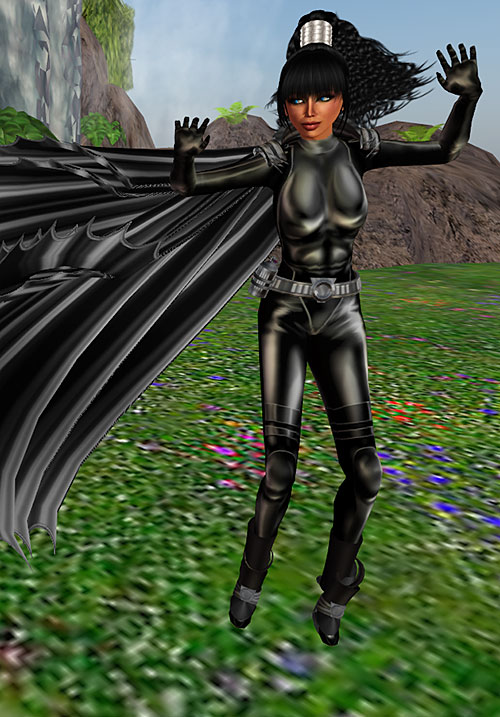 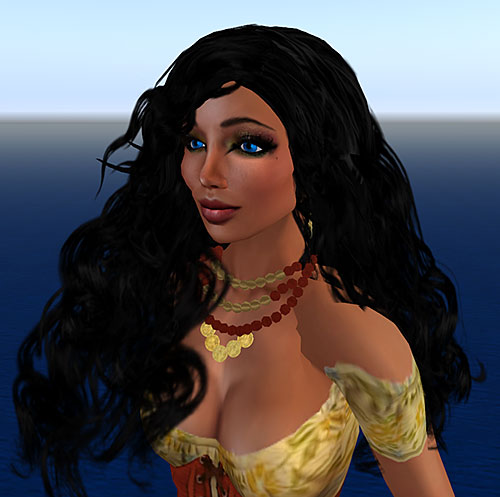 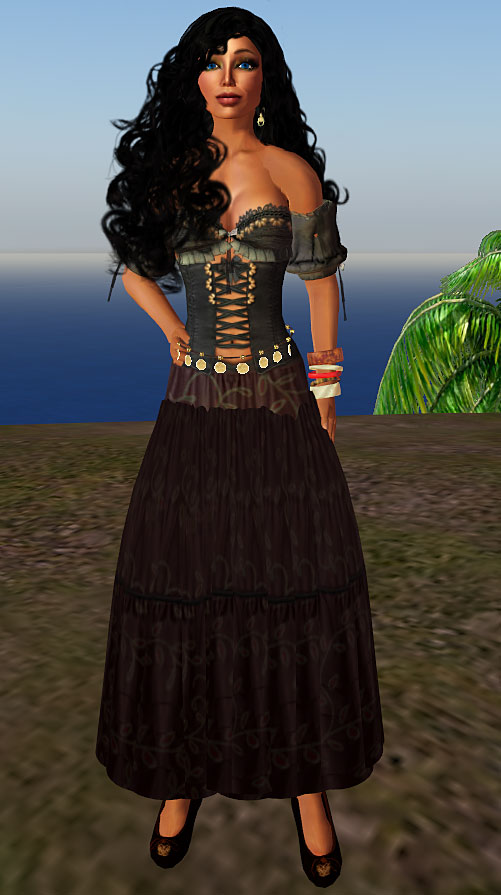 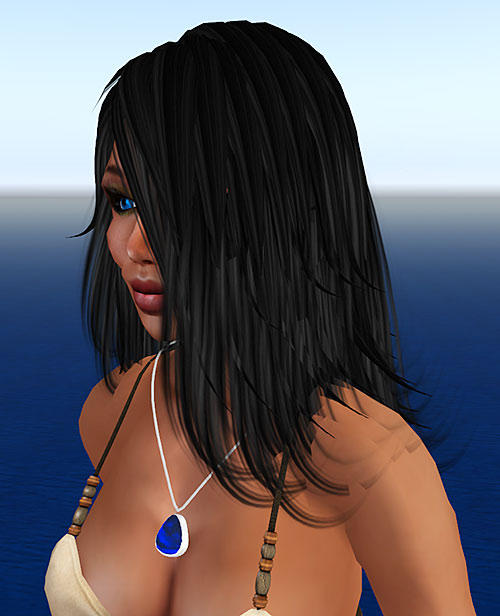 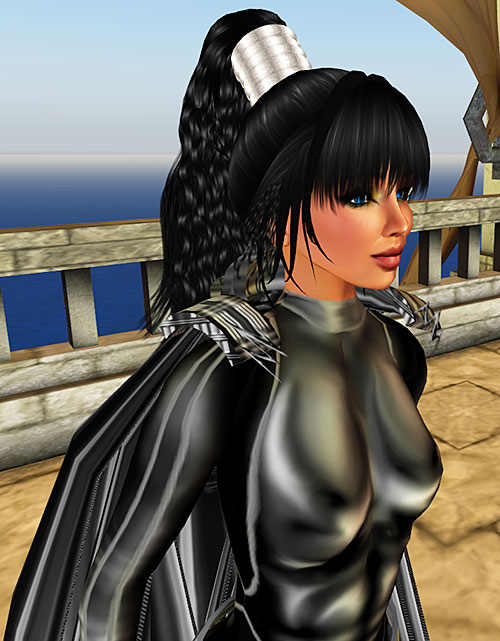