A well-trained thug, Der Flogmeister wears a suit of what appears to be scale armour. He also carries a small arsenal of weapons which he handles with obvious skill.

His main weapon is his five foot long hammer. But he has also used a set of bolas, and a small throwing knife, although he could have further weapons on him at any time.

Der Flogmeister was one of a group of mercenaries hired by Mars Dragonrider. He acted under the command of the mercenary Doberman, to carry out the kidnapping of Mars’ daughter Nikita. Doberman himself managed the actual abduction, but Der Flogmeister was one of those assigned to guard their local warehouse base from Nikita’s boyfriend, Rascal, and his group Strikeback. 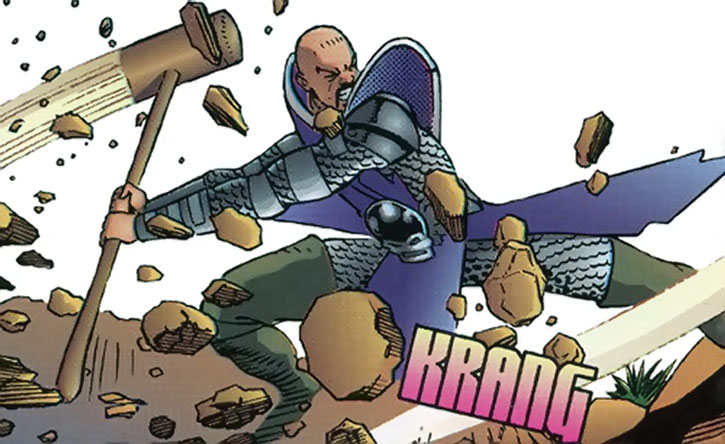 Strikeback arrived as expected. Also as expected, battle ensued. Some of the less loyal mercenaries then decided to take Nikita to Dragonryder themselves, to get the money promised to Doberman. Der Flogmeister was one of the crew Doberman took with him in pursuit of the ship.

They caught up to the ship as it crashed near the Grand Canyon. Nikita now was on the run with Jade Cobra and Midnight Devil, who’d rescued her.

The mercenaries confronted them, and Der Flogmeister was angered at Midnight Devils’ mockery. But his attacks on the Devil kept missing the mark. Furthermore, they never had the opportunity to conclude the fight as Doberman caught Midnight Devil by surprise.

With Nikita and her friends captured, the mercenaries escorted them to Dragonryder Island. Der Flogmeister wasn’t seen during Monster X’s rampage, so it’s safe to assume he survived the episode. 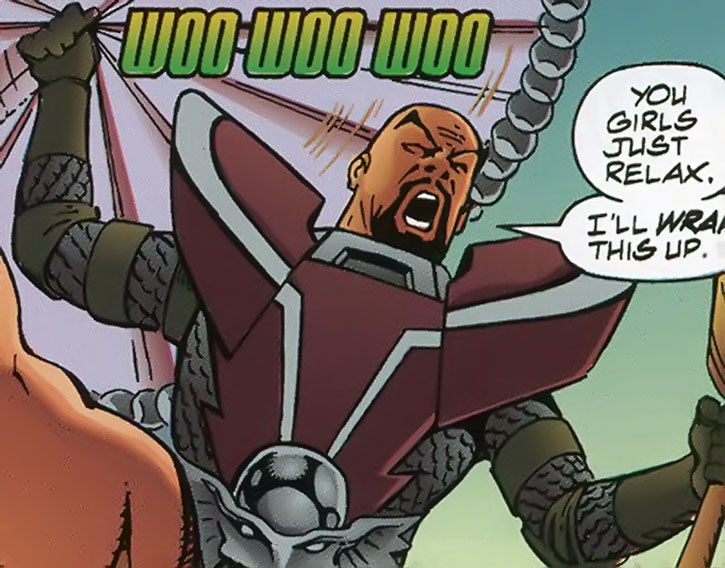 Blustering and straightforward, Der Flogmeister approaches challenges head on. He prefers straight battles, and getting angered at trickery and dodging.

He also hates having his name mocked.

Following an uncomfortable encounter with the JLI, Der Flogmeister has a serious hatred for Blue Beetle and Booster Gold, who refused to stop laughing at him.