This profile stops early in the game, in order to minimize S P O I L E R S. It only uses information from the earliest stages of the adventure.

Flux hails from a society that resembles modern Western Earth, albeit with much more advanced technology. And… that’s all we know early in the game. In fact, there’s no reason to assume that Flux is human. We can’t tell. She’s permanently wearing her full-body suit.

So for instance Flux has a boss, a job, a pension, has been named Employee of the Month several times, complains about bureaucratic and managerial nonsense, makes puns that only make sense in English, etc.

What little we do know early on

There are hints that the public sector is rather large. The Bureau of Shipping might not be private sector, and Flux makes references to “other Bureaux”. Her supervisor also threatens her pension rather than, say, to fire her.

The setting seems to have mastered teleportation. But given the emphasis on the reliability of shipping, it may be that teleportation becomes increasingly unreliable over interstellar distances. In this hypothesis, important things have to be shipped by a courier, whereas commodities can just be teleported and the losses written off.

Flux Dabes is an interstellar courier. Though she doesn’t want to be called that, it is essentially being a space trucker. She drives a transport vessel solo, making good time to deliver important shipments across vast distances in a punctual and reliable manner.

Her ship moves in a warp bubble. Traditionally, that’d be a form of hyperspace travel.

In her setting, being a space trucker is an elite job with stark requirements and training. Specifically :

Flux is an amazing technologist, and really good with her hands. This seems to be a mixture of courier training and personal passion for tech and crafts. Furthermore, she has access to extensive Bureau databases with tutorials that range from knapping flintstones to building cutting edge robots. 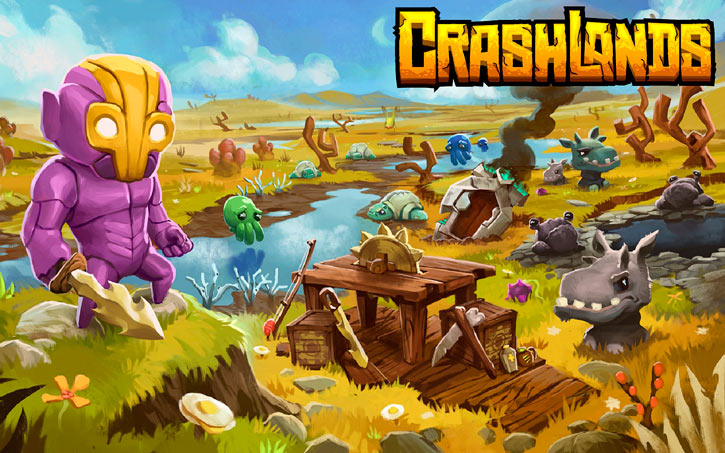 If it can be built, Flux probably can build under delay, under budget and above specs. This ranges from packing dried alien grass using resin to build mats for the floor of a hut, to rebuilding starship engines for fine-tuning. Furthermore, she can do biotech as well – including agriculture.

During the course of the game, Flux essentially recreates modern technology by harvesting natural materials, then building her own tools, erecting her living quarters, planting her fields, etc.. However, she has the benefit of enormous information, from the aforementioned database and from soon-to-be-mentioned scanners.

Cross it, crack it, switch – update it

The scanners are installed on her partner, Palette Unit 42A. Flux built this robot herself. It seems that she also programmed its personality to be her best buddy. Being entirely sapient  and having a full personality, 42A goes by “Juicebox”.

(I would assume that it’s “Palette” rather than “Pallet” due to some sort of marketing gimmick for this class of robots. Maybe they could be ordered in any shell colour or something. But that’s a No-Prize Hypothesis .)

Juicebox serves as shipment supervisor aboard Flux’s space truck. In practice it seems to be a mix of AI personal assistant and expert system. Juicebox holds a full copy of the Bureau’s databases, and can verbally provide Flux with the information she needs to work. It also has a robust bank of scanners, so it can analyse stuff then check for further Bureau data.

A Palette Unit is essentially a floating cube. However, Flux styled hers to resemble a floating cartoon juicebox, with a sort of antenna looking like a bendy straw coming out of the carton. It also has a screen showing a stylised, but expressive, face.

During most of the game, Juicebox is riding a hovering, metallic pallet unit. It looks kinda like the bed of a pickup truck, but without the pickup truck. This unit carries the precious packages Flux was shipping when she was intercepted.

Flux constantly wears a hardened suit covering her from head to toes. Presumably it is a light vacuum suit, worn in-ship in case of a sudden hull breach. It also has an onboard computer, with an UI that presumably displays as a HUD. 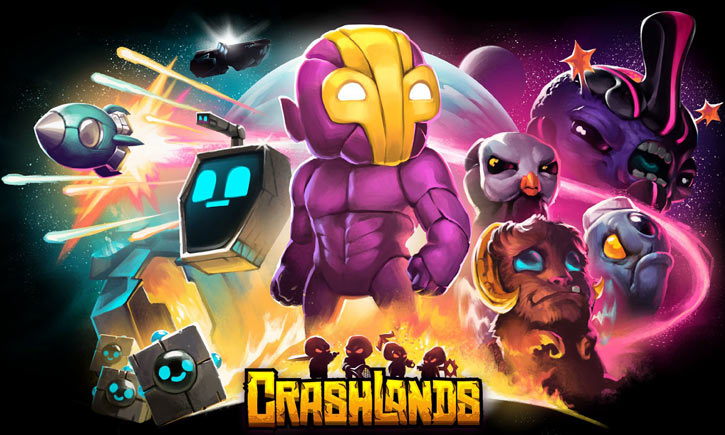 The suit is also keyed to some really good teleportation technology. Applications include :

(The “bug out” mechanism is a translation in non-video-games terms of the die-and-respawn game mechanics in Crashlands).

Flux could speak with everyone without hindrance. It seems likely that the suit also has translation software for documented languages. Howbeit, the database of cultural concepts is clearly lagging behind the raw linguistics.

During a routine run, Flux’s ship was violently forced to return to normal space near the planet Woanope. It had been attacked by the megalomaniac alien scientist, Hewgodooko. The evil floating science head did not hesitate to blow up the ship to procure the evil scientific parts he needed for his current evil science project.

As the ship dislocated, Flux and Juicebox saved the all-important packages. They then rushed into the survival pod. The landing was messy, but the packages and the crew were unhurt.

The procedure was to contact the Bureau, to have a Space Rescue Space Truck sent in. However, this required building a sufficiently powerful comm device to reach the Bureau. The ship has been lost too swiftly to salvage germane parts, so this left local procurement.

On one hand, the escape pod was in the middle of nowhere. On the other hand, there was at least one local sapient  species, the Tendraam. These were a mix of goat and plant with insect-like wings. The Tendraam weren’t hostile but seemed generally low tech, and likely wouldn’t be able to help much with the comm device.

On the other hand, many local plants had interesting properties. Take for instance sawgrass. Within hours Flux was working with the tough, sharp-edged, large blades of that grass. They could serve as raw material for crude floors and walls, and even for primitive tools such as machetes and saws.

The Tendraam were generally welcoming. Though their population density was low, Flux and the locals soon traded favours. The Bureau databases about resources on Woanope were good, but the local know-how (particularly to build tools) was invaluable.

Furthermore, Flux discovered that the natives didn’t like Hewgodooko at all. After the evil scientist summarily slew a young Tendraam, Flux forged an alliance with Grandmammy, a Tendram leader. The old lady was dead set on freeing her people from Hewgodooko’s depredations.

However, trading with Tendraams also meant getting involved in their religious issues.

The flower that roared

Since Flux walked rather than flew, it meant in Tendraam cosmology that she was a plant. They classified her as a flower, since she was purple. Which meant that she had to be allied with Maarla, a nurturing goddess. 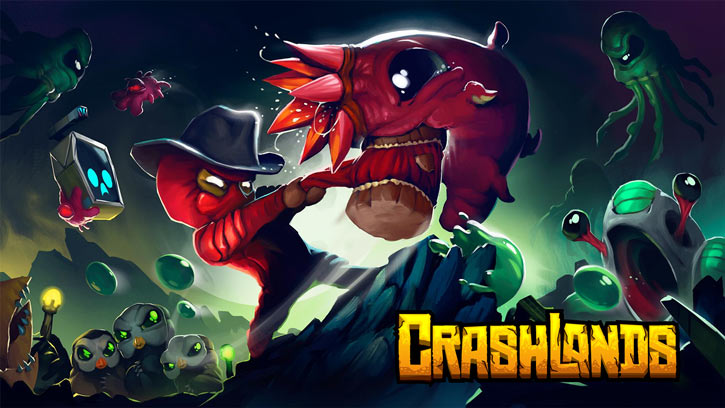 To Juicebox’s dismay, Maarla was an interventionist goddess. She could manifest as a disembodied voice. Marrla half-dragged Flux into her conflict with Baary, a malign mushroom god.

Meanwhile, it emerged that the Tendraam weren’t *that* low tech, but their scientists tended to be… eccentric. Furthermore, the Baconweed Fairy wasn’t just a nursery tale as you had always assumed.

See illustrations. We don’t even have an idea of her general dimensions.

The cartoony art style with childlike body proportions is often associated with diminutive characters, but this is too tentative to be reflected in her game stats.

Flux is lively, enthusiastic and full of humour. She has a very high morale, and is generally friendly and open-minded. She might be a bit hyper.

Flux doesn’t mind deadly violence – which is good, since she needs to hunt for survival. And she will unhesitatingly slay aggressive animals. But she isn’t enthusiastic about it when it comes to people, unless they’re attacking her.

She’d rather focus on getting out of here, since delivering her packages is paramount to her. She likes helping, but getting dragged into religious conflicts is something she’d rather avoid because she has a job to do. To DELIVER THE CARGO.

Flux loves puns, banter and jokes and can come across as a zany stand-up comedian more than a space trucker. Mind, the two aren’t incompatible, but driving a truck while standing up doesn’t seem like a good idea.

“Booyah ! Time to make a locally-resourced saw !” (after building her tool) “Check out my saw ! IT’S SAWESOME !”

(Pointing at schematics) “Yes ! A sawmill would allow us to HARNESS THE POWER OF WOOD !’

“These packages aren’t getting delayed on my watch !”

Flux: (Dramatically brandishing a sword she just crafted from alien grass) “TASTE MY BLADE !”
Juicebox: “What does it taste like ?”
Flux: “… celery, actually…”

“Of course it’s going to work. With the right attitude, you can milk any creature !”

She comes from OUTER SPACE!, so she could pop up anywhere.

Bonuses and Limitations:
Superspeed only for Gadgetry Tasks.

Advantages:
Headquarters (Constrained but eventually Expansive), Pet (Juicebox). Flux likely has some sort of Rank advantage within the Bureau, but at a low level.

Connections:
Bureau of Shipping (Low, from her Rank). 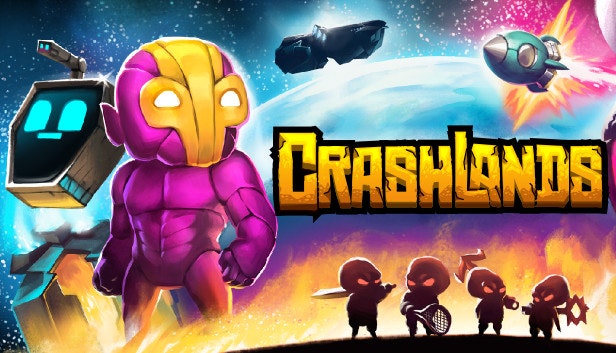