Flux can alter her shape into various, vaguely animal-like forms.

She tends to gravitate around flexible snake-like transformations, since these are quite useful for both infiltration and fighting.

Flux was a member of Division 13, a small group with an unclear agenda and a strong interest in the activities of the military base in Cinnibar Flats, Nevada. Cinnibar Flats was guarding and hiding the Vortex, an alien installation apparently responsible for many of the mutations and super-powers throughout the world.

Flux’s real name is apparently Amy Wildings. However, like the other two Division 13 members (Frank Lamb and Axe-Grinder), her origin and goals remain mysteries.

Another flashback implied that Wildings was a random passer-by who had her purse snatched by a young thief. While she and a nearby police officer were chasing the thief, they accidentally collided with another fleeing youth.

This latter kid was being chased by a military team from Cinnibar Flats. He was apparently the carrier of some sort of Vortex infection. After shooting the kid dead, the military forced everybody whom the kid had touched to follow them to Cinnibar Flats.

The flashback implied that the thief would become Axe-Grinder, the policeman was Frank Lamb, and that they gained their abilities after the collision with the fleeing carrier.

All three Division 13 members are apparently escapees from the Block 13 detention centre at Cinnibar Flats. This is where Vortex-altered persons are held. Lamb leads the Division, and his goal is apparently to free those Block 13 prisoners who are not violently insane so they may live free. But his plans and allies mostly remain mysteries.

Division 13 did manage to infiltrate Block 13. The later stages of the operation were facilitated by the arrival of space aliens who had come to kill the alien scientist living within the Vortex. 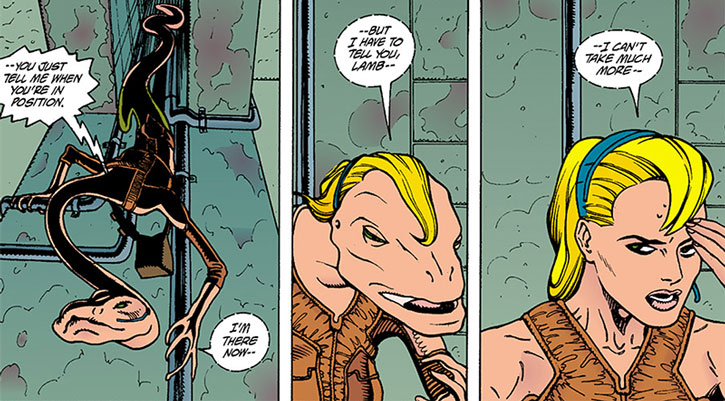 Division 13’s primary goal was to free one Carolyn, Lamb’s mysterious inside contact providing him with intelligence. Flux blew open Carolyn’s cell using plastique. But after staring at what was within she left alone. Flux told Lamb that the explosives hadn’t worked and the mission was a failure.

Some months later, the situation at Cinnibar Flats became catastrophic. The would-be hero Titan grew insane – and enormously powerful. His fight against the political leader Grace, also a mighty superhuman, came to involve the Vortex. The maddened Titan killed many of the soldiers there in a fit of anger. Many of the Block 13 inmates used this second attack to flee.

Division 13 scoured the desert to catch escaped mutants, reasoning with those who could think and talk. They rescued two mutants named Voxx and Optic, and a sort of three-headed hellhound Optic could talk to. They also encountered Law, the first escapee of Block 13, but he and Lamb couldn’t agree on shared goals.

Division 13 disappeared in unclear circumstances, shortly after having met Law. Axe-Grinder became deathly afraid of something within his axe. His weapon biodegraded a few days later, leaving him mentally crippled. The rift between Lamb and Flux grew, and Optic and the dog disappeared.

Notes left by Lamb refer to severe memory losses, terrible new lifeforms in the desert, and “it” not allowing them to leave the area.

Flux is an independent young woman, somewhat attracted toward Lamb. She is, however, put off by his fanatical drive and unclear motives.

Flux is damaged. Her power hurts when she uses it, she hates using it, and she thinks that it makes her a freak and a monster. Unfortunately, her powers and her high intelligence make her the most effective operator among Division 13, and thus she’s constantly thrust into action.

The Division 13 stories had something quite close to the Black Mesa/Half-Life atmosphere. It can be used in a campaign with room for this type of horror stories.

Bonuses and Limitations:
Self-manipulation can only assume organic forms (-1).

Drawbacks:
Mistrust, Loss Vulnerability (if Self-Manipulation is Neutralised, all her Physical Attributes and Skills drop to 02). 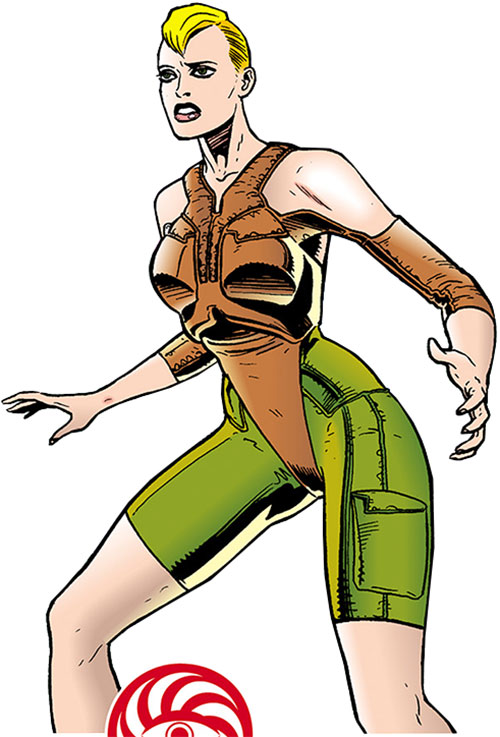