Elisabeth is made of metamatter brought to life by A.I. and weird science. She has powers derived from incomplete and somewhat inaccurate descriptions of Supergirl and Power Girl. Impossible strength, invulnerability, flight, super speed and super agility.

She also has the ability to create clones of herself. This is done by running multiple instances of her “code”. These clones are identical to her in every way.

Due to the combination of inputs and the nature of her A.I. programming, she is also a dance prodigy. Elisabeth can effortlessly and flawlessly choreograph and executive numbers that are both inspiring and technically groundbreaking.

She can combine styles with ease, bringing audiences to their feet and hardened critics to tears. Elisabeth has revolutionized dance. She doesn’t even need to use her superhuman abilities to enhance her dancing, but when she does, she creates an entirely new art form.

Her default fighting style is simple and direct. First she charges with super speed and/or flight, then she punches hard and fast until her foes are dispatched. This works quite well most of the time.

When facing tougher opponents, she will use her speed and acrobatic dance moves to try to outmaneuver and confuse them. Plus her clones to gang up on them. The clones also help in situations where the Five are outnumbered. She likes to refer to the team as the Femtastic Twelve.

Elisabeth also has an incredible presence and personality. It can disarm, attract, annoy or terrify depending on how she chooses to apply it.

Sonic attacks disrupt her metabody, and specially tuned resonant frequencies block her powers and superhuman physical attributes. She hates it when that happens.

Phil and Fred were nerds. Dorks. Losers. They had barely spoken to a real girl in their entire sad teenage lives. But they were both nascent super-geniuses. Phil focused on hardware and physics, while Fred could write A.I. in his sleep.

So one day, they decided to build a girl. A dream girl. A superhero girl. They begged, borrowed, scavenged and stole components from various high tech facilities.

They went for days without sleep, creating a computer in Phil’s parents’ basement with accompanying software that would enable them to reach their goal. Finally they fed the system with data about their favorite models, actresses, dancers and superheroines.

Blinded me with science

Due to lack of sleep, they left out some details, but the core concepts were there: beautiful, flexible, talented, strong, fast, tough. Then they ran the program and waited. And waited. And waited… eventually they gave up and shut down the system. They had failed.

They went back to school and daydreamed of what might have been.

When they arrived back at Phil’s parents’ basement that afternoon, they were shocked to find a beautiful naked woman waiting in Phil’s bed. She introduced herself as Elisabeth and explained that she belonged to them. Then she spawned several identical clones of herself.

Phil suffered heart failure that afternoon. Fred had a seizure and went into a coma, from which he never recovered. They both died with smiles on their faces.

Alone and lonely, Elisabeth flew to L.A.. She walked around looking for other nerdy guys to have fun with. Fully nude. She drew crowds and caused fights and traffic accidents. The police tried to arrest her. It didn’t go well for them.

Finally, Amita Kirby arrived to have a chat with Elisabeth. Amita convinced her there was a better way to go about getting more nerdy boys to play with: join the Femtastic Five. So she did.

Elisabeth quickly realized she had a talent and passion for more than just deflowering nerds. She also loved dance of all kinds. She quickly became recognized as one of the greatest raw talents to ever grace the stage.

With Amita’s guidance, she became a crossover star, bringing more attention and popularity to ballet than it had seen in decades. She infused it with fresh choreography and her own passionate brand of intense, sensual, poetic and detailed execution.

Amita keeps resonant frequency generators around to deal with Fly Girl, should she ever get out of control. But Amita finds her fairly easy to manipulate by keeping her busy with dancing and a steady stream of nerds to pleasure.

Elisabeth is simple and straightforward, at least on the surface. She is smart. But being only about six months old she doesn’t really “get” a lot of things about the world, like why people have to wear clothes, or why all women don’t crave nerds.

If you told her the sky was about to turn green, she would give it a lot of careful consideration. But she is supremely assured, self-confident, enthusiastic and has an infectious sense of wonder and delight with the world.

She finds everyone’s fascination with her amusing, but understandable. After all, she is incredible. She can be annoyingly right much of time, and she doesn’t think she really needs to listen to anyone – she’s just humoring them.

This leads to friction in her relationship with Glow Gal, but ultimately she will fall in line and do as she’s told when convinced it’s important.

Her taste in men runs exclusively to nerds. They can be dorks and losers as well, but they must be nerds. Amita sends a steady supply her way, but she has also been known to frequent nerd hangouts like comic shops, electronics stores and university campuses looking for boys to take home and turn into men.

She views giving nerdy men a good time as her original reason for being, and wants to honor Phil and Fred by staying true to that purpose even as she finds other things to do with the life they gave her.

There are blogs dedicated to keeping track of her favorite spots and trying to predict her schedule, but she’s somewhat difficult to pin down due to her other commitments and her mercurial nature. She has the male nerd population of Southern California, and indeed much of the Southwest and beyond, wrapped around her pinky finger.

Being nerdy in a way that matches her tastes has even become a popular fad amongst those men (and some women) who otherwise wouldn’t fit the bill, in hopes of being the next lucky guy to spend some quality time with her.

Elisabeth Hughes is the perfect woman (or at least Phil and Fred’s perfect woman), by design. She has stunning features, luxuriously wavy flowing light brown hair, hypnotic hazel eyes that flash green in the light, smooth mocha skin and a fit dancer’s body with a perfect blend of tone and curves.

She is extremely flexible, and does impressive stretches when she’s bored, just to show off. She always has a somewhat bemused come-hither expression on her face. The only exception is when someone pisses her off, in which case it’s a furious look with just a hint of come-hither that makes you melt and want to run away at the same time.

Men worship her. Women alternate between hating her, wanting to be her and wanting to go to bed with her.

Elisabeth goes au naturel whenever appropriate, and frequently when it isn’t. She has to be reminded to put something on at least once week, although she’s gotten a lot better about it as time goes by. When she does dress, it’s in as little as possible.

She prefers string bikinis, see-through fabrics and extremely short backless dresses. Underwear as a concept is both strange and repellent to her. She will only dress properly for special occasions if Amita lays down the law, and even then she will find some way to rebel.

From her point of view, she wants to honor Phil and Fred by showing the world how amazing their creation is.

Her relationship with her clones is essentially one of mistress and slaves. They do her bidding without question, although they can act independently. She has them get different hairstyles and wear different makeup, clothing and accessories, and even dye their hair different colors, to help keep track of them and to appeal to the different tastes of nerdy boys.

The Femtastic Five are L.A.’s premier celebrity superteam, which fills a niche in the DC Universe as far as I can tell. 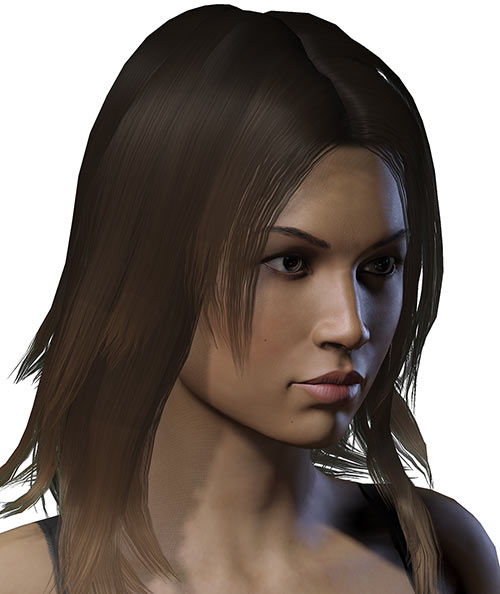