The Fly is a skilled gadgeteer  and scientist. Many of his superhuman abilities (such as his wings) may, in fact, be derived from technology rather than natural powers.

He appeared in “The Spider-Man and the Fly”, which was in Avengers #153 among other places.

Spider-Man awakens, strapped down to a table in the hidden lair of the Fly. The web-head remembers being thrown off the Empire State Building by the villain, “Now that wasn’t nice !”, says Spidey.

The Fly plots an evil fate for the captive hero, “This is no laughing matter… you’ll soon be wiggling and squirming, my spidery friend, when you see what I have in store for you.”.

Spider-Man breaks free of his restraints, but the Fly pulls out his gun, which traps Spidey in an electronic field. Unable to move, Spider-Man resorts to another strategy, “Okay, you win. I give up. But first have a Hostess™ “Twinkies” here in my utility belt.”.

Not able to resist the golden sponge cake and creamed filling, the Fly gets close enough for Spidey to swat him “like a mosquito”.

Nabbed by the hero, the Fly pleads, “Do what you want… clip my wings… anything… but at least have the decency to let me finish my wonderful Hostess “Twinkies !”. Considering what flies usually eat, Hostess probably shouldn’t have advertised he fact that he really likes Twinkies.

Always a hero of compassion, Spider-Man replies, “Of course, my noble enemy. I dispense justice but tempered with mercy… and sometimes even… Hostess “Twinkies !”.

In 2009, the Fley was seen in the S-Wing of an unspecified New York prison. His name was given as Gardner Polley, and he seemed markedly older. He briefly participated in an accidental breakout, but everybody was brought down using sedation foam.

The Fly looks similar to the now-deceased Marvel Universe Spidey villain of the same name. Although the Hostess Fly wears the same yellow and green color combo, there are a few differences in the costume. The general suit is yellow, with a lot of little cross-hatches on it. The boots, gloves, shorts and belt are green.

Except for his nose and mouth, the Fly’s head is covered by a big, green fly-mask. Small antennae poke out of his forehead, just above his huge, red, faceted eyes. He has a pair of insect wings on his back.

The Fly seems like a mad-scientist type, as his lair is packed full of hi-tech equipment. His manner and dialogue mark him as a typical Power Lust character, undoubtably bent on world domination, or some such thing. 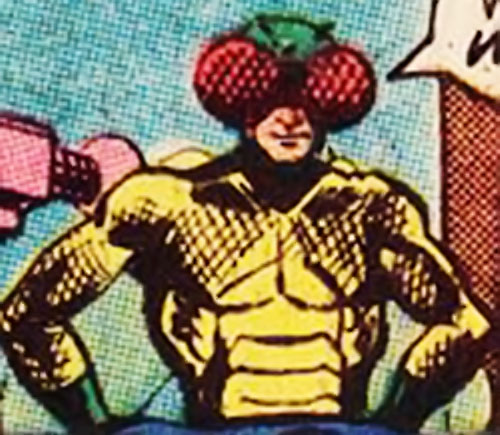