As the Fly, Troy possesses a pair of insect-like wings that allow for flight. These wings are powerful enough to generate huge, buffeting winds that can send grown adults sailing. Other abilities include :

The Fly also carried the “Buzz Gun” created by Turan. It used compressed air to fire silver stingers that induce unconsciousness, and can also generate destructive sonic waves equivalent to the beating of the wings of thousands of flies.

He also has used the gun to communicate with the police.

Tommy Troy lived in the Westwood Orphanage. The superintendent, Aaron Creacher, hired him out to raise money.

Tommy thus worked for elderly Ben (aka Ezra), and Abigail March. Tommy learns that were wizards. Late one night, he tries on a fly shaped ring he finds in the attic.

It glows and a door opens to another dimension , from which steps Turan of the Fly People. He explains that millions of years before, Fly People ruled the Earth. But they waged war with magic, reducing most of the population to common houseflies.

Only a few Fly People were able to escape, fleeing to a dimensional plane outside the Galaxy. There they have waited patiently for “one person… pure of heart” to make war against greed and crime, which were their own downfall. Troy has these qualities.

Thus whenever he rubs the ring and says, “I wish I were the Fly,” he is projected into the other dimension and returns as a costumed adult called the Fly. To become his civilian identity, all the youth has to do is utter his name.

Tommy continued as the Fly into adulthood, cleaning up crime in Capital City.

A sometimes wisecracking, sometimes serious hero. The Fly is nevertheless extremely brave and devoted to the cause of the Fly People.

Perhaps the Fly People are related to, or enemies of, the Warlock of Ys.

Early in his Career the Fly’s Alter Ego Tommy had Age (young), and No skills. The Fly also did not have his Sidekick Fly-Girl at this time. 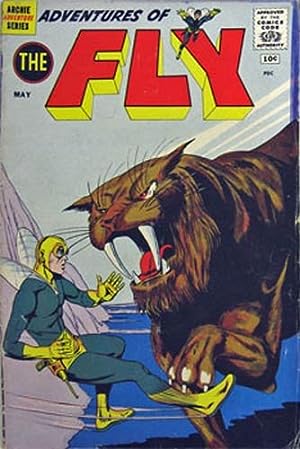 Adventures of the Fly