The Flying Boots were one of the gimmicks that appeared in DC Comics’ War that time forgot series. Well, it wasn’t really a series – it was a “weird war” theme shared by numerous stories, usually involving WWII American troops fighting improbable dinosaurs. There wasn’t a continuity – it was just that such stories sold well.

Much of the “War that time forgot” material was retroactively attached to the DC Universe. Because who doesn’t want to see G.I.s shooting bazookas at giant dinosaurs (don’t answer that) ? However, once you start into the specifics of how to integrate the published material into the DCU it becomes… complex.

You should prolly read our dinosaur-sized Suicide Squadron profile first, which extensively discusses all this stuff.

The Flying Boots appear to be special operations WWII American soldiers. They’re probably US Army Rangers from the Sixth Battalion.

In any case they are extensively trained, can operate deep behind enemy line without support, and are well-armed shock troops with submachineguns (M1 Thompson or M3 “Grease gun”) and plenty of grenades.

These grenades (or “TNT eggs”, as they are fond of calling them) are depicted as being very powerful. With some luck they can kill dinosaurs.

The most distinctive skill set of the Franks is that they are circus acrobats specialising in trapeze work. They are highly coordinated with each other. Three-man acrobatics such as forming a human pendulum or a swiftly-reconfiguring human pyramid or column are trivial for them.

Their designated catcher is Steve – the strength of his grip, and the ability to support weights while hanging from a trapeze-like structure, are incredible.

They are also superior parachutists, being unafraid of heights and used to manoeuvre in the air.

Lastly, the Flying Boots have been able to land and roll after falling from heights that would have killed anybody else.

One reptile, one ranger

The stories in which the Flying Boots appear have no continuity whatsoever. They are probably not meant to take place in the DCU.

However, they are part of thematically-related stories dubbed The war that time forgot. Several elements from these were gradually stated to have been part of the DCU. The best known examples are the successive models of G.I. Robot, the Creature Commando and the Suicide Squadron.

Assuming that the Flying Boots existed in the DCU is thus no big deal. However it implies that they should have some sense of context and history rather than being featured in contradictory short stories existing in a vacuum.

The times that time forgot

If we grab everything that looks like a clue, savagely extrapolate from there, and keep in mind the post-Crisis background material for the Suicide Squad, a possible scenario is that :

The three Frank brothers were born during the 1920s. Apparently Steve is the oldest, followed by Henny then Tommy.

It is reasonable to assume that they had some experience with firearms and wilderness survival in their youth, as they seem to have aced Army Ranger training very quickly. That they were hunting enthusiasts with superior marksmanship is the simplest hypothesis.

The three brothers worked as circus acrobats, the Flying Franks. They were mostly known for their trapeze work. During the second World War, the Frank brothers were all drafted at once, and joined the Army after one last death-defying circus performance.

Somehow, they came to form a unique three-man unit often tasked with special operations such as high-risk reconnaissance. 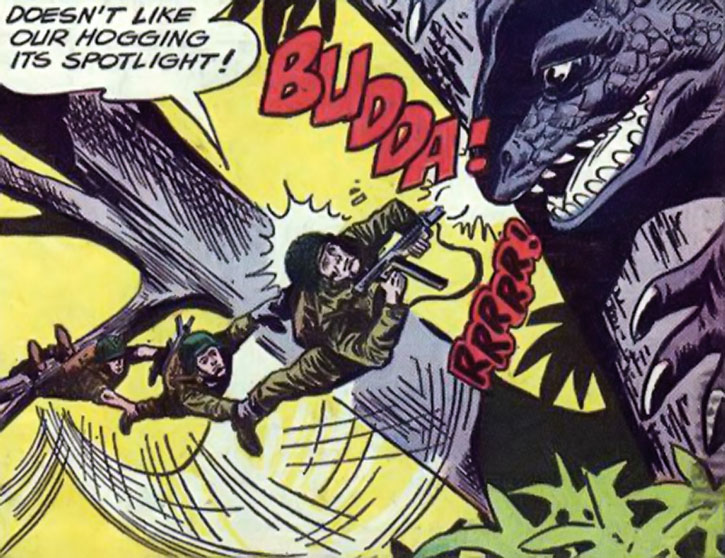 It seems likely that all three men were from the Sixth Rangers Battalion. Perhaps their exceptional fitness and reflexes drew the attention of a senior officer looking for elite troopers. They changed their name as “performers” and became the Flying Boots for the duration of the war.

The Flying Boots were often tapped, presumably by the USO , to perform shows for soldiers across the South Pacific front. Their schtick was to perform trapeze work in full battle kit – including backpack, combat boots and loaded weapons. On one occasion, these proved more than a gimmick as it allowed the Flying Boots to shoot down a marauding Zero strafing the USO show (!).

The Flying Boots were also deployed in some of the roughest battlefields of the war in the Pacific. In particular, they regularly volunteered for Rangers Mission X detail. Mission X was the code-name for deployment in the strange area around the isle originally code-named X Island and soon renamed Dinosaur Island.

The gigantic dinosaurs infesting the island were particularly deadly. They stretched the military and athletic skills of the Flying Boots to their utmost – though the trio always managed to narrowly survive.

The first known Mission X detail of the Flying Boots was a combat rescue operation on Dinosaur Island. The brothers located the three survivors of a Marine Raiders patrol. They helped them exfiltrate the island so they could all be picked up by a submarine and evacuated.

The Boots were then sent to destroy and locate what was assumed to be an Imperial Japanese ground-to-air missile battery left on Dinosaur Island. It had recently downed five drop planes. Despite constantly running from aggressive dinosaurs, they found the hidden weapons emplacement.

It was indeed a nest of radio-controlled missiles. It had been installed by Imperial forces before they were wiped out of Dinosaur Island by the sudden emergence of prehistoric beasts. Using the missiles as vehicles they flew out, blew up the Japanese weapons, and were picked up by a reconnaissance plane.

Months after this adventure, the Flying Boots returned to Star-Spangled Stories with unexplained changes. They were now Marine Corps paratroopers, their circus speciality was no longer the trapeze but the high wire, and they were now named Chuck, Al and Bill. 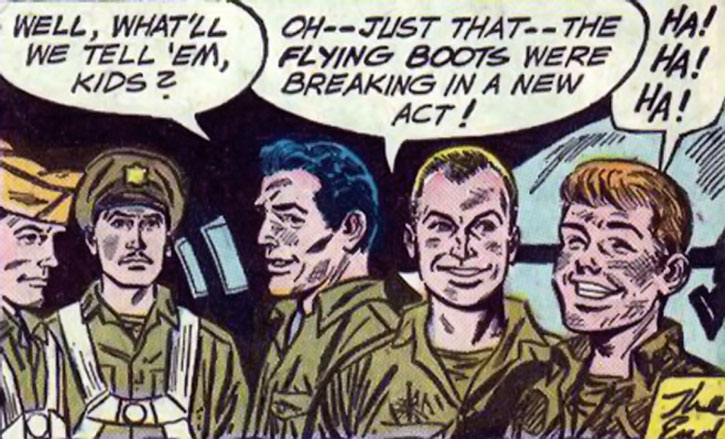 The first post-reboot story is not stated to take place during WWII. In fact the end features what seems to be a Sikorsky H-34 Choctaw , strongly hinting that the story took place per publication date, in 1962.

The next story seems to take place in the past, though – possibly during the Korean War. Yet the Boots end up on the usual dinosaurs-infested island. And they’re now para-commandos.

The Konfounding Kurse of Kanigher

For this article’s purposes, we’re going to ignore these reboots. However, you can of course stick with Kanigher and decide that, by an amazing coincidence, *another* trio of acrobats named the Flying Boots had essentially similar adventures on the same island about 17 years after the first Flying Boots.

The Flying Boots volunteered for another Mission X detail. Navy spotters had gone MIA on Fireworks Island. It wasn’t the first time that the Navy had underestimated the dangers of the area. They apparently refused to believe early US Army and US Marine Corps reports about Dinosaur Island and nearby islets such as Fireworks.

As usual given the weather patterns of the Mission X perimeter, the parachute drop went wrong. That was due to the abnormal winds, unpredictable cloud cover and pterosaur attacks. The wind dragged the Boots to Dinosaur Island, where they were again forced to fend off constant dinosaur attacks until they managed to float away in the ocean on a dead tree.

By an extraordinary coincidence they were rescued by “Zig-Zag” Zack. Zack was a circus promoter whom the Frank brothers had repeatedly and unsuccessfully tried to impress so they’d work together. The promoter was now apparently a Petty Officer First Class with the US Navy.

Some time later the Flying Boots were tasked with ferrying a M26 Pershing tank  to a landing invasion force. It had been repaired too late, but it was still worth it to rush it to the battle using a landing craft. Why Rangers were detailed to this, and what the invasion was, was unspecified.

Still, we could imagine that command knew that an isolated landing craft in the Mission X area was too vulnerable and might be attacked by dinosaurs. And thus asked the Boots to volunteer given their track record of surviving dinosaur attacks.

As to the invasion, it is possible that Imperial Japanese forces managed to retake part of Dinosaur Island. Perhaps they wanted to recover their giant robot there, not knowing that it had just been wrecked by the first documented G.I. Robot.

Everybody dodges the dinosaur

Of course, the barge was attacked by a sea serpent and dragged all the way to Dinosaur Island. The Frank brothers decided to crew the tank, disembark and find a way out. They killed a number of attacking dinosaurs until they lost the Pershing to a flying mega-dinosaur. 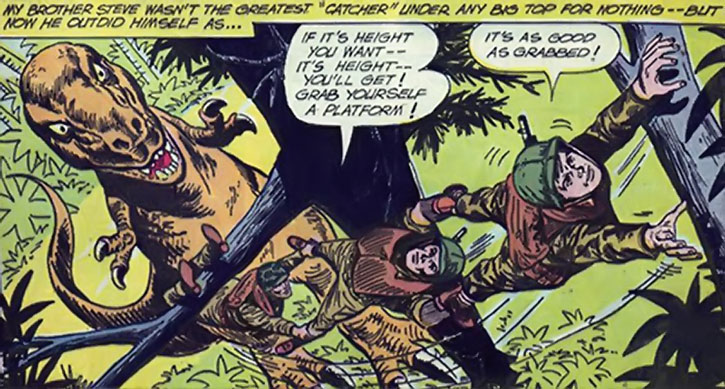 As they continued on foot, they found Zig-Zag Zack. He was the sole survivor of a Navy aircraft that was attacked by a pterosaur. The Boots managed to exfiltrate from Dinosaur Island, killing more dinosaurs. They kept Zack alive in the hope that he would be so impressed with them as to hire them for his circus when the war would be over.

While the Boots and Zack managed to float away from the Island by commandeering the nest of a mega-pterosaur, the Navy doctor who rescued them told them that their efforts had been in vain. Zig-Zag Zack had been in shock ever since his aircraft crashed, and didn’t remember the impressive exploits of the Flying Boots to get him off the Island.

That was the last appearance of the Flying Boots that I know of.

Steve is clearly the leader of the group, taking most (but not all) of the initiatives and giving the orders. The Frank brothers are highly coordinated and used to working with each other.

One of the schticks of the Flying Boots is that they consider everything to be a circus performance, rating it by how crowd-pleasing it would be. Their constant banter and minor jokes is likewise meant to be circus artist slang and turns of phrase.

“We can’t stay on here ! That’s for sure ! Our only chance is to reach that branch up there with a human pyramid !”

(Coming nose-to-nose with a hostile dinosaur among the branches).
“Yeeeoow ! There’s another headliner up here ! And it doesn’t like our hogging its spotlight !”

Steve: “Good thing [that this giant crocodile we’re clinging to] is coming out of the water. I had about one breath left !”
Henny: “I had about a half !”
Tommy: “That’s twice more than I had !”

“We’re putting on the biggest show in the war — without an audience !”

Connections:
None demonstrated in the service.

Equipment:
The Flying Boots normally deploy with equipment intended for commando actions – a M1 or M3 submachinegun, and plenty of Mk2 grenades : 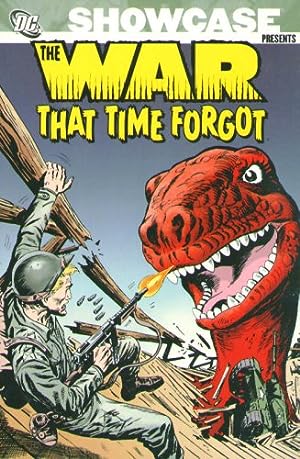 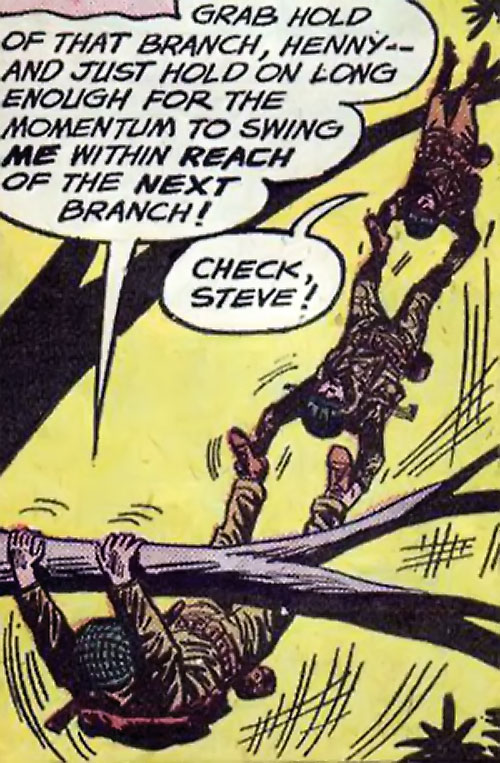 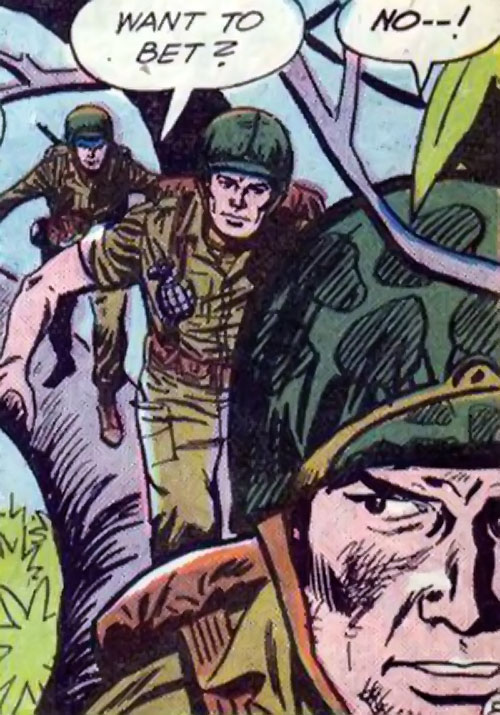 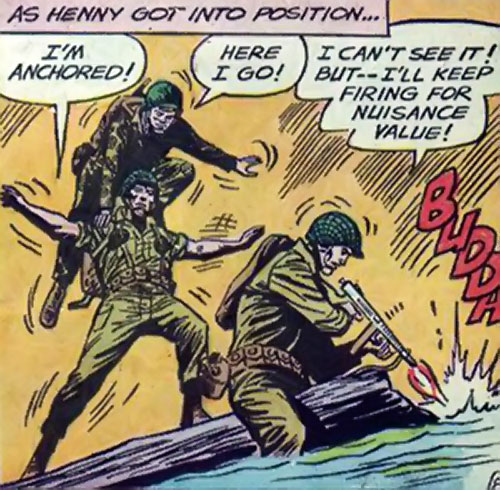 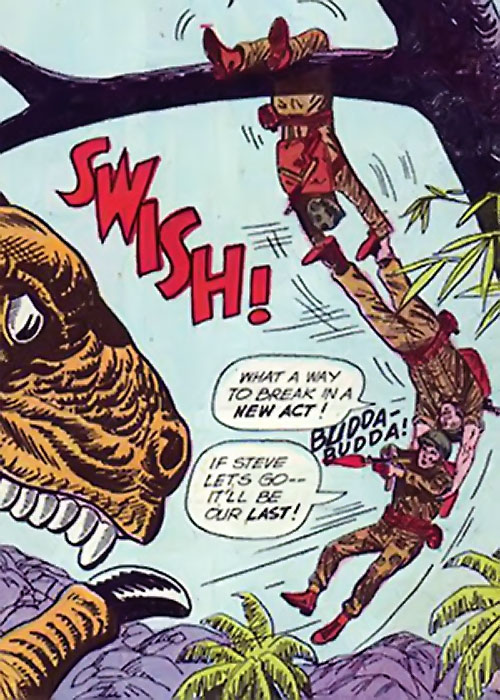