Flying Fox’s magical cloak of fox fur enabled him to fly. His acrobatic skill aided his manoeuvrability in flight.

Flying Fox was the son and heir of the chief of a hidden First Nations tribe living in Northern Canada. For many years the tribe avoided contact with White folks.

During World War II the Nazis learned about the tribe. A commando ferried across the Atlantic in a U-Boat attempted to get the tribe to engage in guerrilla warfare against the Canadian government.

When the shaman refused to fight against the Canadian government, the Nazi commander had his men shoot the tribe’s chief dead.

The chief’s son, who at that time was known by a different name than “flying fox”, was grief-stricken. But the shaman directed the youth to go to a lost cavern to obtain the cape and cowl of the magical flying fox.

The shaman permanently painted this emblem onto the chest of the chief’s son, who was renamed Flying Fox. The youth also received training in the use of his new magical powers from the shaman.

Flying Fox was sent by the shaman and the tribe to the United States to help in the war effort against Nazi Germany.

On President Franklin Roosevelt’s request, Flying Fox joined six other young members of the All-Star Squadron on a cross-country tour to encourage the buying of War Bonds. These seven heroes were nicknamed the “Young All-Stars”.

His ultimate fate is unrevealed.

Bonuses and Limitations:
All Powers require that Flying Fox be able to freely make gestures (-1). 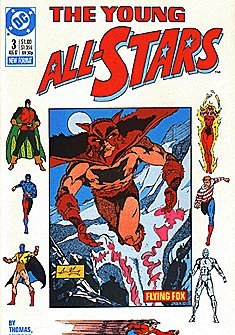