Flying Tiger is a brutal fighter and proficient athlete, who excels in aerial combat.

His main asset is a flying suit of light power armour that can fly well past 400mph, and makes him strong enough to lift 14 tons. It is well-armoured, though it it much better at soaking a series of medium-powered attack than one high-powered attack.

The suit is specially reinforced against impacts into obstacles, crash-landings and falls. This allows the robust Flying Tiger to stay active and conscious through multiple crashes.

Flying Tiger usually attacks by ramming his target with his body in mid-air, and/or using the claws on his costume. Due to his velocity it’s fairly difficult to make the difference – use the Claws power for EV in both cases for simplicity’s sake.

His claws have proven able to shear most metals when used for fly-by attacks. He has torn through Mach-1’s armour, and inflicted nearly fatal wounds to the superhumanly strong Spider-Woman.

Flying Tiger is ruthless and tactically capable. He will use his great skill at aerial combat and his environment both. For instance he will endanger civilians to keep heroes busy, disappear by flying into buildings then reappear for a quick ambush, use background noise to cover a diving attack and retain surprise, take hostages among his opponents, etc.

Flying Tiger hinted that he was a former football player, and even boasted that he played the Superbowl. He also bragged about his piloting skills, claiming he had been in numerous dogfights and never went down in flames.

It is certainly possible for somebody to have had both such careers. However, another claim — that he was one of the historical Flying Tigers  American fighter pilots in China — is more problematic. Although in the Marvel Universe everything is possible, these tales do leave one wondering whether the Superbowl thing and the ’expert combat pilot‘ thing are fabrications.

Flying Tiger stated that it was after he had been suspended from his career as a professional football player that he became a hitman in San Francisco, somehow acquiring his signature suit of power armour and creating the identity of the Flying Tiger.

His first known employer was General Nguyen Ngoc Coy, a San Francisco crime lord who hired him to terminate the troublesome Spider-Woman. Ambushing Spider-Woman, the Flying Tiger viciously hammered her. Their flying combat took them to the Golden Gate Bridge, where the tenacious dark angel was finally knocked out and fell into the water, seemingly to her death. 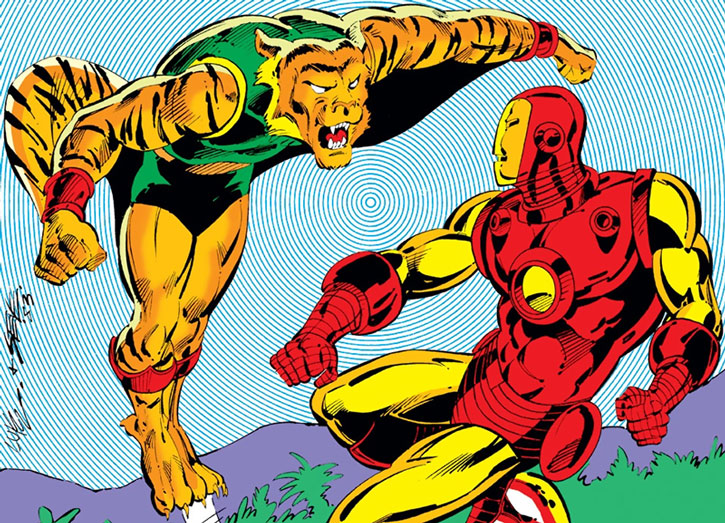 She was rescued by the crew of a US Navy submarine. The sailors’s medical staff saved both her life and her back, since the later had been nearly broken by the Flying Tiger. Spider-Woman laid low for weeks, taking tai-chi lessons to help her recover from her wounds. She eventually returned as Spider-Woman to rescue a woman hounded by Nguyen Ngoc Coy’s enforcers.

She almost immediately clashed with Flying Tiger, who had thought that she was dead. Using tai-chi movements, Spider-Woman let Flying Tiger crash into a number of obstacles. She then managed to finish him with a point-blank venom blast to the face before he could take her out. The Flying Tiger was taken into police custody.

In unrevealed circumstances, the Flying Tiger was later captured y the Locksmith. Although the Tiger was still wearing his costume, the Locksmith had designed special restraints making it impossible for him to fly or use his strength.

Spider-Woman, who also had been captured by the Locksmith, started a breakout. Flying Tiger presumably escaped at that point.

Back in the employ of Nguyen, the Flying Tiger was sent to kill entrepreneur Regis Fuskey. The killer infiltrated Fuskey’s private jet as the new co-pilot, abducted his target above a war-torn South American country and flew away.

Fuskey’s bodyguard was at that point James Rhodes. However, Fuskey did not want Rhodes to publicly wear the armour. Thus Rhodes could not stop Flying Tiger in the plane, and could not pursue since Flying Tiger also took the attache case with Rhodes’s armour inside.

Rhodey managed to pursue via parachute and even recover the briefcase. But the Flying Tiger caught him and was about to kill Rhodes when the government started bombing the area. The Flying Tiger was caught well into the blast radius of a 1,000 lbs. bomb, though his costume allowed him to survive.

Eventually recovering, the Flying Tiger tried to flee the war zone, but Rhodey (now in full Iron Man armour) caught up with him and got his revenge, knocking the dazzled Tiger out with one punch. 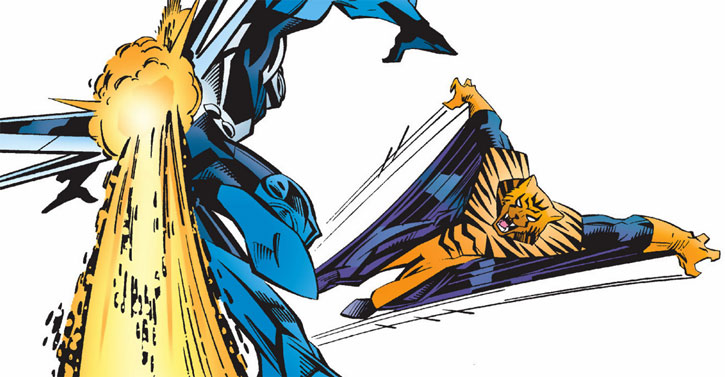 Some time later, Flying Tiger was one of the seemingly random villains who were mind-controlled by a Doctor Doom device into attacking the Fantastic Four while they were on trial. But the mind control made the villains unto inefficient sleepwalkers. Thus the attack failed completely. Flying Tiger was easily stopped by the Thing.

The confused criminals woke up with no understanding of how they had gotten there and why they were being arrested.

The Flying Tiger may have then been incarcerated for a while, presumably for prior charges. When he was next seen it was alongside other super-villains, as part of a large prisoners transfer to the super-prison, the Vault. He eventually got out, though, and resumed his career as a merc, briefly appearing as a visitor at a huge AIM weapons expo.

The Flying Tiger was not seem for a while, but reappeared among the small army of supervillains that was assembled by the new Crimson Cowl (Justine Hammer). These new Masters of Evil performed fairly well against the Thunderbolts when the two groups repeatedly clashed.

However, Hawkeye eventually joined the Thunderbolt and became their leader. Under his very experienced command, the Thunderbolts soundly defeated the Flying Tiger and his 24 (!) colleagues. Most of the Masters of Evil were captured by the authorities.

Flying Tiger is a rough, ruthless, tough-talking killer and soldier of fortune. He enjoys making threats and intimidating remarks, and seems proud and macho. A big thug, he likes to hit people hard and often, and generally enjoys his work.

He is more courageous than the run-of-the-mill costumed mercenary. Frex, unlike many of his colleagues was not afraid of messing with the Red Skull’s Skeleton Crew if his pride demanded it.

He will even talk back to his employers if they start annoying him by implying that he’s not competent enough. When the Crimson Cowl inquired in a vaguely aggravating way about how the work was going, he told her that she should come in the field with him if she thought things were not going fast enough.

The Flying Tiger made a racist remark about Jolt, but since he loves tauting opponents that may just have been a way to try and aggravate her.

Given Flying Tiger’s predilection for constant trash-talking, this entry includes an extra helping of quotes so GMs have material to convey his style.

“Evenin’, webs. Flying Tiger’s the name, murder’s the game. You’ve made some very heavy enemies lately. They want you dealt with, permanently. They gave me the contract — because I never fail.”

“If that was your best shot, toots, you’re in a lot of trouble. Make things easy on yourself. Hold this pose.”

“Not too shabby. Your moves are as sweet as your figure. If I was a prince among men, I might be inclined to let you go. It’s a pity I’m no prince.”

“Wel-l-l-l-l… The big, bad bodyguard. Come after me, did you ? You are gonna regret that for as long as you live… a couple of seconds…”

(To Jack o’ Lantern) “You will address me as Flying Tiger or we’ll see how much better [than Macendale] you are.”

“Not bad, slant-eyes. You got speed, moves, and you throw a good punch. But against the Flying Tiger… you need more than that !” (KLOK !)

“You call that flyin’, Mach-1 ? […] I’ve seen an’ done things you can only imagine, punk. An’ if you think that beat-up suit you wear makes you my equal… well, it’s your funeral !”

Bonuses and Limitations:
Acrobatics (Dodging) is only available when Acrobatics (Aerial) is active.

The Flying Tiger is never stripped of his costume when imprisoned, and his own though bubbles always referred to *his* strength and flying ability. Upon reading we always had the impressions that his key Powers were innate, and the costume was just clothing. The official version is that the Powers come from the Flying Tiger costume, and that is the approach that is used in the main stats block above.

If you want to have the powers not come from the costume increase his STR to 10, give him the Flight and Skin Armour (with the Bonus) as Powers, move the Conditional Soaking up as an Advantage. Alternatively you can ditch the Skin Armour and just bump his BODY to 07.

As to the FLYING TIGER COSTUME, in this approach it becomes [BODY 10, Density Increase: 01, Shade: 01, Sharpness (STR): 01, Bonuses & Limitations: Density Increase is Always On and Already Factored In (all it does is increase weight and reduce Knockback)]. 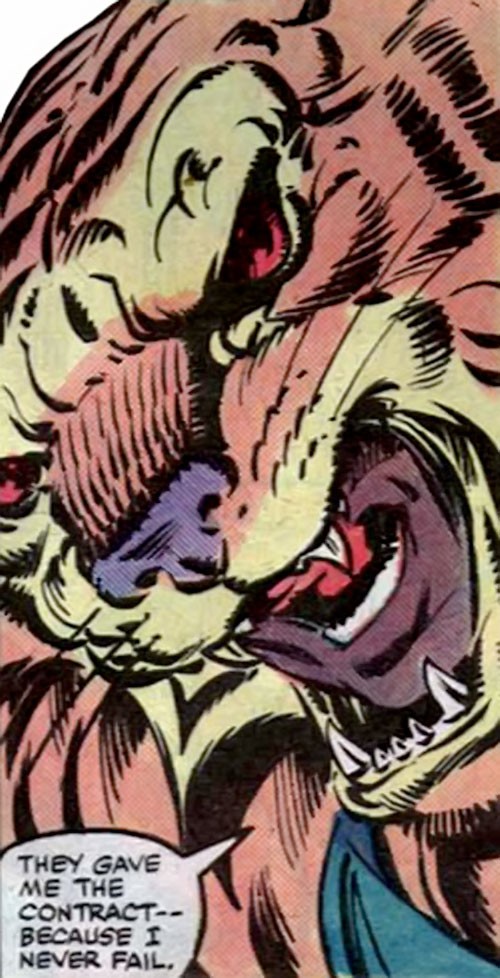 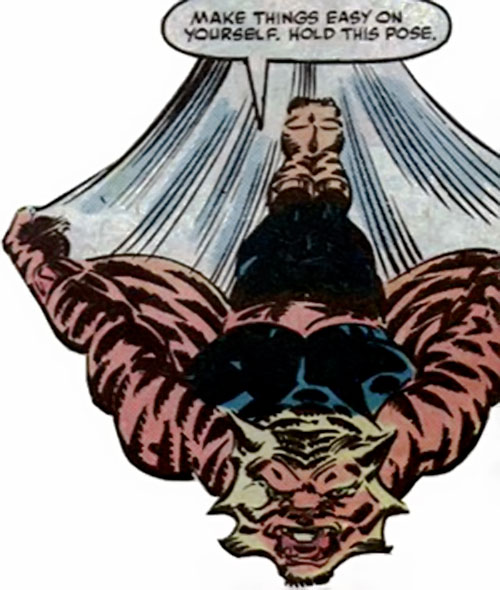 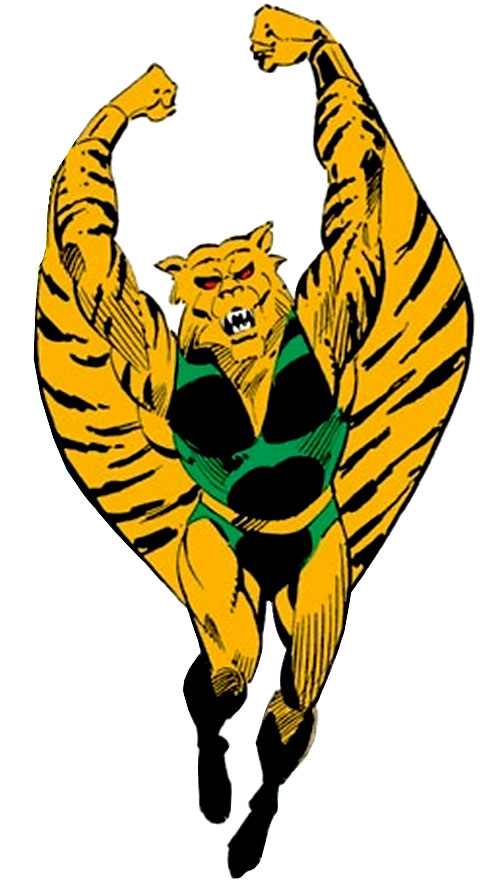