Gerhardt is self-trained in combat. While not an exceptional fighter, he is in excellent condition, and has developed a high tolerance to pain.

As Foolkiller, he wore a bullet-resistant vest. He also wielded the Purification Gun, a powerful handgun shooting a sort of laser. A solid hit with the beam can all but disintegrate a person, leaving but ashes.

His father was pointlessly murdered by street thugs, despite Kurt’s repeated warnings that he was underestimating how bad his neighborhood had gotten. As Gerhardt struggled with shock, guilt and depression the bank fired him. However the downsizing was purely to get a short term profitability and stock prices boost. The managers who fired 24% of the workforce made off like bandits.

Mrs. Gerhardt eventually left her increasingly depressed, angry and obsessive husband. Running out of money, he took a job as a fast food restaurant worker. On his very first day the restaurant was held up. Going postal as he flashed back to the death of his father, Kurt pounced on the robbers, but was badly beaten up.

Gerhardt kept the job. Though it was insufficient to pay his accrued bills, he couldn’t get anything better. In 1990, he saw a TV interview of the former Foolkiller (Greg Salinger), now a mental patient in Indiana.

As Gerhardt kept ruminating dark thoughts about society and injustice, he saw Salinger as a kindred soul. They discreetly chatted at length on a private BBS . Greg eventually directed Kurt toward an associate of his, Merle Singer. She gave Kurt a stashed Foolkiller costume… and a Purification Gun.

As he left with the package, Kurt ran into two skinheads assaulting a woman. He had to slay them with the Purification Gun. Shocked and sick over having become a killer, Gerhardt started his slow descent in a mixture of insanity and awareness.

He became the new Foolkiller and gradually refined his ethos as a killer vigilante with a body count in the dozens.

The Foolkiller has been working out a lot, though his basic frame isn’t super-heroic. He abandoned the pirate-like Foolkiller costume for something resembling a S&M executioner.

The Foolkiller acts in a calm way and with an eye toward dark irony. It is very important to him that his target(s) fully understand why he will be killed, but he often lacks time to explain.

The Foolkiller sometimes add a symbolic element to his costume when hitting a target. An example was wearing an ESU sweater when he shot down the ESU dean.

Kurt Gerhardt was a man who was hit hard by depression, injustice and a feeling of impotence. He’s fully aware of how unjust, absurd and destructive society is, and after talking with the Foolkiller just couldn’t take it anymore.

At first fools were, for him, people who could hurt others without suffering any consequences, or would let others be hurt without raising a finger. The death of his father was weighting heavily on him.

Forcing the world to make sense

He later reached a more fundamental version of the Seeking Justice motivation. The easy way was the one everyone was looking for, regardless of consequences for others. Thus, he wanted to frighten the world into becoming less superficial, and more *responsible*.

He had another epiphany, realizing the nature of “fools” and their society. In Gerhardt’s view they hated effort, and the definition of a “winner” was not someone who worked hard (this would be termed “sucker”) but someone who had everything he wanted without effort.

The killer awoke before dawn

While the actual, gritty work of the Foolkiller weights heavily on him, Gerhardt manages to act in a calm, efficient way when he wears the mask.

He always try to obtain a last confirmation that his target is a fool, having a short dialogue before shooting. But he needs very little, just an answer that the target persists in his beliefs or does not understand what is going on. The later is because explaining would take too long and thus present too much risk.

However, most of Gerhardt’s kills were done in self-defense during a hit.

The Foolkiller murders random fools as well as high-profile targets. He went through a harsh episode where he was tempted to use his powerful gun for minor altercations or even personal purposes, but has left that behind him.

“You’ve been inflicting death and pain for fun — because your lives and your minds were that empty. And because you thought you could get away with it.”

“The sane must inherit the Earth. From this moment forward, the penalty for senseless violence, for unthinking greed, for wanton ambition, for reckless destruction in the pursuit or momentary gratification or profit will be death.”

The third Foolkiller is not really needed in the DCU, as pretty much the same stories can be told with the Black Spider.

If using him, the story might be best shifted back a few years – the “urban jungle” themes used by the story were stronger in the first half of the 1980s in New York City, and by the time the story was published had started to fade away as crime rates kept diminishing year after year after year.

Source of Character: Foolkiller LS back in 1990-91 (Marvel Universe).

Helper(s): Jackson, The Angel. Marvunapp.com for drawing my attention toward the LS in the first place. 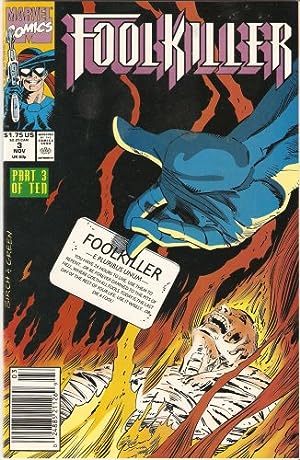 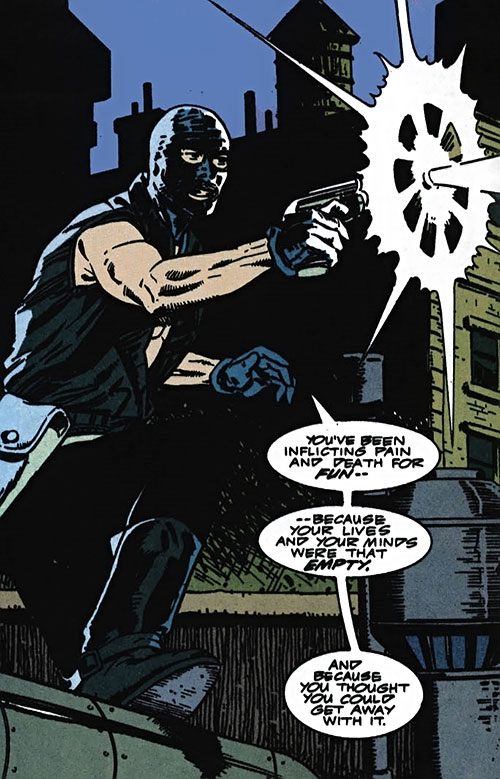 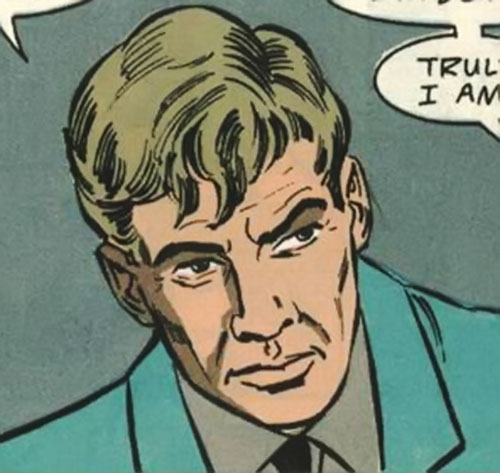 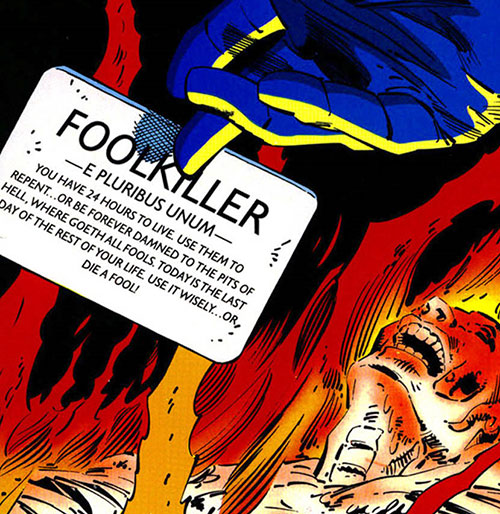