The Force of July debuted in DC comic books in 1984, as enemies to the Outsiders. They are a low-to-mid-level group, which is handy in many tabletop RPG campaigns.

They embody an exaggerated version of a paranoid, authoritarian, xenophobic, jingoistic US ethos.

The name is a pun on the 4th of July, the national American independence day.

The Force of July appeared from 1984 to 1989. But Freedom’s Ring, a very similar team, was active during the 2000s and perhaps beyond.

Full Name :
The Force of July.

Purpose :
Make America great again by destroying foreign, liberal, un-American and Communist threats within.
After Blairman’s scheme is exposed, they become a less politicized Federal super-team with much greater accountability toward the White House and have to toe the line… until A.L. Carlyle restores operational conditions very similar to Blairman’s.

Modus operandi :
Superhuman strike force greatly resembling a super-hero group. Albeit with a vague paramilitary slant to their tactics and approaches.

Extent of operations :
Primarily the mainland USA, but the Force has at its disposal a supersonic transport plane for fast projection, and extensive US foreign intelligence data.

Relationship to conventional authorities :
This is a field team working for the American Security Agency, one of the numerous fictional governmental covert operations in the DC Universe. The ASA was apparently disbanded in 1989.
However they have twice willingly come under the leadership of maverick extremists with manifestly illegal plans, and many officials may thus not trust them. 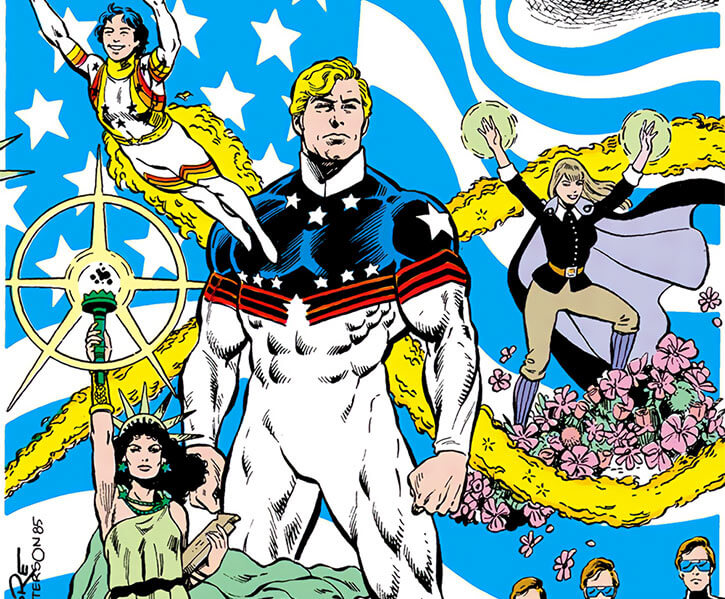 Bases of operations :
Federal offices in an unspecified major city.

Former bases of operations :
The Blairman familial estate in the Virginia countryside — presumably not too far from the District of Columbia. Later on Freedom Base (a hidden underground complex in the Rockies, now destroyed). Later on A.L. Carlyle’s seaside Californian mansion. 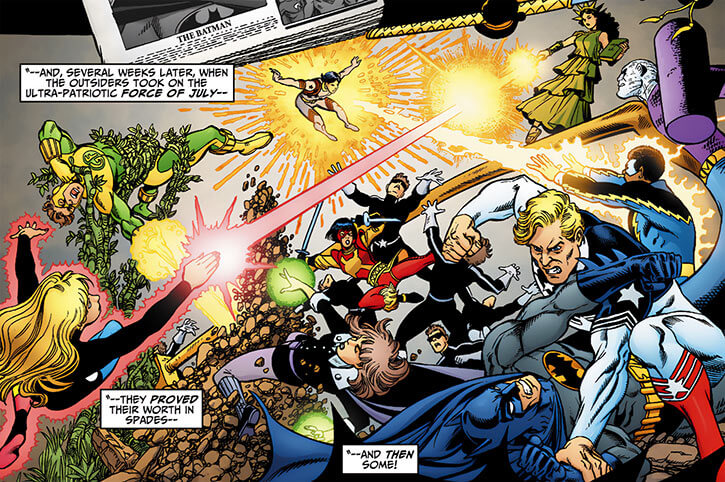 Number of active members :
Five before the Janus Directive.

Number of reserve members :
None known.

Organizational structure :
The team is placed under the direct command of the director of the American Security Agency. 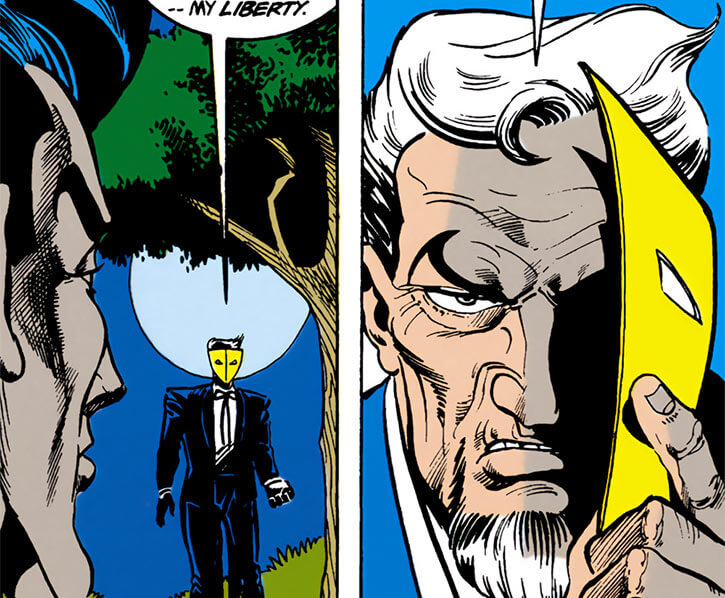 A.L. Carlyle with the Medusa Mask.

Membership requirements :
The team members were presumably vetted by B. Eric Blairman based on their skills, ethnicity and political beliefs.
Despite Blairman’s general disdain for “un-American” elements even as minor as speaking English with a foreign accent he hired multiple Force members from other countries, albeit with costumed identities which tied their countries to American history.
One gets the impression that their superhuman capabilities had been developed, at least in part, by the ASA. 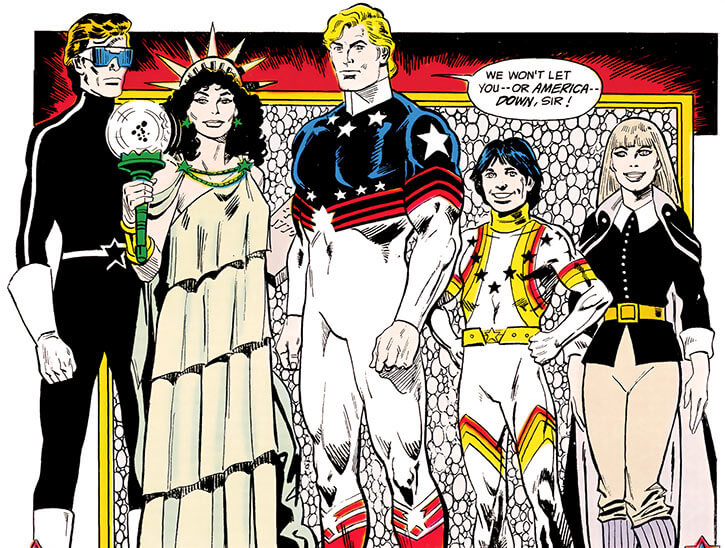 As a youth B. Eric Blairman was inspired by George Orwell’s book 1984. But the lesson he drew was that a totalitarian government could be a benevolent force for America under the right leadership.

Blairman became director of the American Security Agency (ASA), a government organization dedicated to national security, and began working on a plan to bring his dream to fruition — Project Orwell.

Aided by his genius sister Laraine, Blairman oversaw the construction of the Omni-Cast satellite, a panopticon which could monitor electronic communications, block signals and broadcast altered transmissions – and even spy on people through their television screens and computer monitors.

Recognizing the need for supersoldiers who could provide muscle for Project Orwell, Blairman had the ASA assemble a group of superhuman operatives. Dubbed the Force of July, the team had five members: Major Victory, Lady Liberty, Mayflower, Silent Majority, and Sparkler.

The first mission for the Force of July took place in Gotham City, where they stole a component from S.T.A.R. Labs needed to complete the Omni-Cast satellite. This put the Force into conflict with the Outsiders.

During their second battle, the Force of July defeated the Outsiders and took them to their secret mountain headquarters, Freedom Base. It was there that the Outsiders learned the extent of Project Orwell.

Breaking free, the Outsiders destroyed the Omni-Cast satellite and left Blairman and the Force of July trapped in the rubble of Freedom Base. 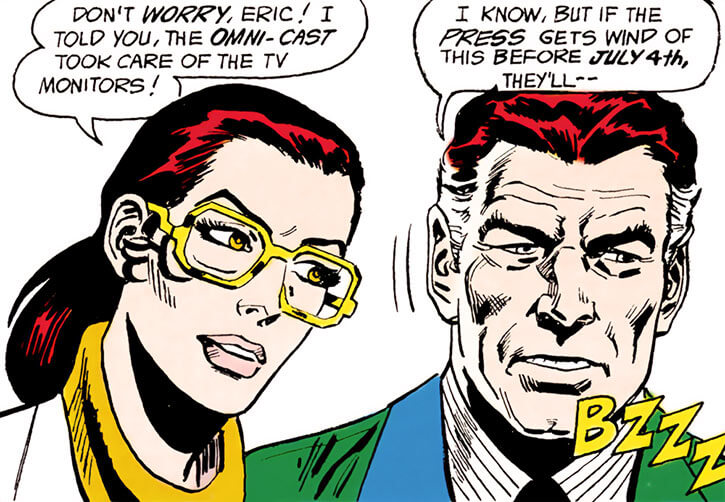 The Force of July eventually dug themselves out of Freedom Base and returned to duty.

Their next mission, tracing the theft of American and Markovian currency printing plates, again resulted in a fight with the Outsiders. These ere also investigating the theft and were mistaken for the guilty parties by the Force of July.

The Force of July followed the thief back to Russia, only to be captured by the Soviets and studied in detail. The Outsiders arrived and fought to retrieve the plates and free the Force of July.

Out of Russia with love

With both teams working together, the battle quickly turned against the Russians. The fight was brought to a swift end when the Soviet president simply turned the plates over, realizing the incident was becoming more trouble than it was worth.

Though the Force of July and the Outsiders were content with retrieving the stolen plates, they did not realize that the Russians had scored an even greater coup in the process.

Analysis of the Force of July during their captivity gave the Soviets the necessary information to create their own super-soldiers: the People’s Heroes and the Red Shadows.

The Force of July and the Outsiders would soon end up working alongside the People’s Heroes to stop the supervillain Fusion from destroying the Statue of Liberty.

The Force of July’s next encounter with the Outsiders would be as adversaries. The ASA was now being run by Abraham Lincoln Carlyle, a failed presidential nominee who now sought power by any means necessary.

The Outsiders and Infinity, Inc. became entangled in the criminals’ plot. They managed to foil both their plans, defeating the Force of July yet again in the process.

The Force of July met its nemesis during the Janus Directive. The Directive incident began when terrorist cult leader Kobra (Jason Burr) sought to weaken the United States’ intelligence agencies, hoping to prevent them from uncovering and stopping his master plan to construct a space station with a death ray.

One aspect of this plan was to frame the Force of July as traitors, which resulted in the Suicide Squad being sent after them.

In the ensuing battle, Mayflower and Sparkler were killed. The surviving Force of July members were taken captive and eventually cleared of wrongdoing. They joined the Suicide Squad and other operatives of the US’s intelligence community in attacking Kobra’s cloaked giant satellite. 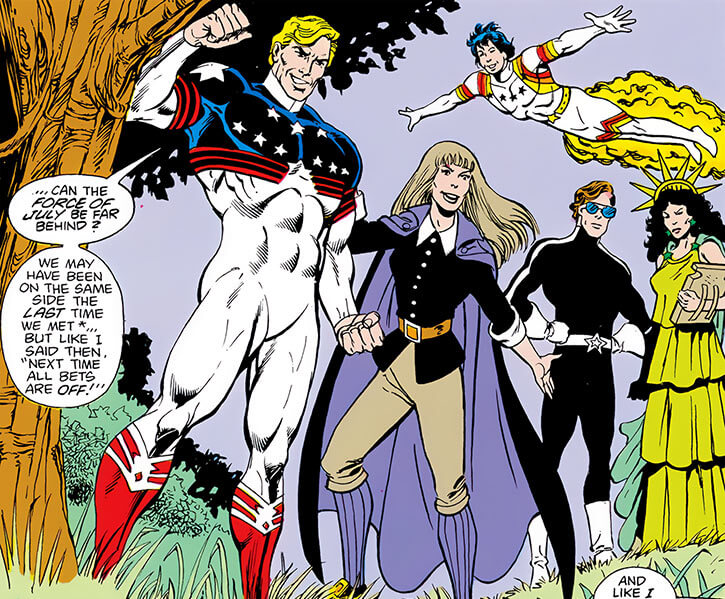 As the only survivor, Major Victory continued to work for the government. Meanwhile, the DC Universe’s American intelligence agencies extensively reorganized themselves after the Janus Directive fiasco.

He died during a catastrophic field operation against Eclipso during the 1990s.

During the 2000s, a new version of the Force of July using nigh-identical costumed identities and power set was deployed as Freedom’s Ring.

Apparently, the technologies used to empower the Force of July had been refined and industrialized by the SHADE super-covert governmental agency to create any number of agents needed.

This patriotically-painted jet conveyed the Force of July when they needed to travel long distances. It was piloted by Major Victory.