Forearm debuted in February 1990. He was a member of Stryfe’s mutant super-villain agents, The Mutant Liberation Front, in the The New Mutants series.

Typically they only raided military installations at first (these are Rob Liefeld creations, after all). But they eventually fought the New Mutants, and later X-Force.

With his silly name and concept (a four-armed guy named “Forearm”), he’s the most immediately recognizable MLF member.

Forearm is a strong, grapple-heavy brawler. But he was easily defeated on many occasions and never regained his credibility.

Despite this, he is on a much lower strength-tier than many powerhouse-type characters. In the first issue of X-Force, he is one-punched by Warpath (James Proudstar), who levels him while the evil mutant is grappling Cable (Nathan Summers).

Despite assumed superhuman durability, he has been knocked unconscious by Psylocke (Elisabeth Braddock), who has normal human strength.

In a later story a few years later, Warpath cracks a joke about “playing with” him, and “whoops- I hit the boy too hard”, knocking him through a wall.

Later, he is easily outgrappled by Anaconda (Blanche Sitznski), and believed slain for a while.

Forearm has, in fact, never defeated another superhuman in battle. Or at least he never did on-panel. 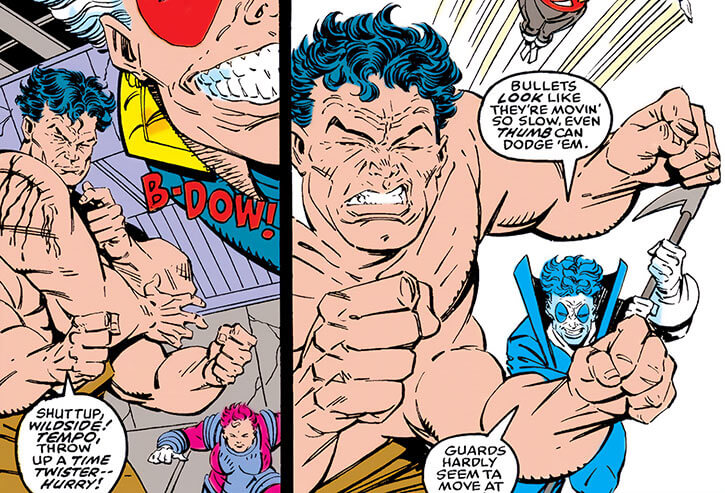 He usually got easily beaten. Warpath embarrasses him on two separate occasions, including X-Force’s invasion of an MLF base.

Liefeld & Nicieza were working hard to make a newly powered-up James Proudstar a Juggernaut-fighting badass, and Forearm was on the receiving end of this.

During the X-Cutioner’s Song (and another invasion of a MLF hideout), he attempts to sneak up on Boomer (Tabitha Smith) and Psylocke. But Boomer notices his approach (commenting on “those sneaky four-armed guys”) and blasts at him with her time-bombs. This allows Psylocke to take him out with a kick in the head.

Later, he is recruited into Reignfire’s incarnation of the MLF. Forearm runs off to battle Warpath, but Warpath states that he’s “playing” with him and claims to accidentally knock him out.

Later, he has a heart-to-heart with his teammate Danielle Moonstar (actually an undercover agent). Their conversation suggests that he’s considering reforming.

However, he is hurt when she turns out to be a mole and abandons the team.

Forearm later appears as one of many random super-villains in a tournament organized by Mister X in a Wolverine issue. He is outgrappled by Anaconda, who snaps his neck.

Forearm is believed to be dead at this point. But he later appears without explanation with the rest of the MLF.

(Many characters seemingly slain during this story also had unexplained returns. Heck, even Gamecock eventually turned up alive – Ed.).

Forearm was later revealed as having been de-powered on M-Day, along with most of the rest of his team. 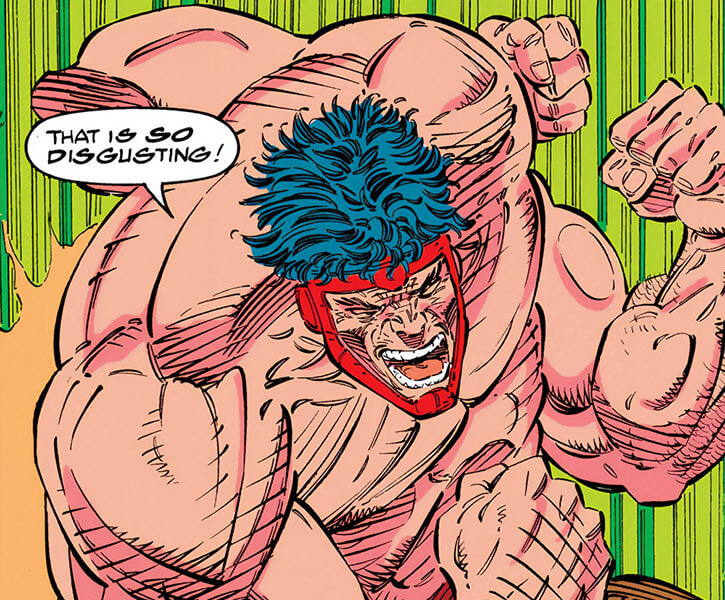 An early character design for Forearm involved a so-so mask that ended up on his colleague Kamikaze.

Forearm did not even wear a costume at first. Later, he puts on baggy pants and a chest harness of sorts. It made him look like a 1980s Masters of the Universe bad guy action figure.

He got a teensy bit of character development in later years, being seen as the most level-headed, non-crazy MLF member. But it never really got dealt with.

With two Extra Limbs, Forearm penalises OV against his Wrestling or Grappling Attack Manoeuvres by – 2CS. As often with Extra Limbs, this is a surprisingly significant bonus.

Forearm is competent enough to use this to perform Multi-Attacks against low-OV opponents such as basic soldiers. And to attempt to grapple rather than punch. 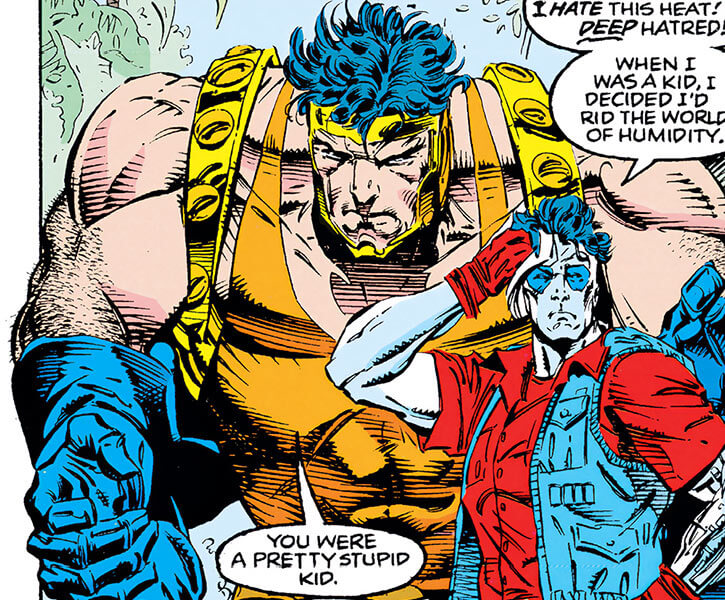 Forearm is among the more powerful members of his team in terms of damage, which really isn’t saying much.

He’s a PL 8, hitting his caps offensively and defensively, and he’s really not that great. Most of his team has really low Saves across the board, and is fairly limited to one avenue of attack.

He’s a standard Brick in many ways, but with some added perks that having four arms gets you. He’s a MONSTER to grapple with, despite being “low end” on the Powerhouse scale with only Strength Class 30 (he’s stronger than Cable, but much less so than the Class 80-ish ’90s Warpath). And he’s got considerable grappling skills.

His Toughness is a little tricky to figure out. He obviously hangs in the Powerhouse class, but less so than Warpath-type Class 80 beings. He took a slash from Archangel and only bled painfully, as opposed to being decapitated or something.

Anaconda broke his back at the END of a fight, which could happen to a lot of guys. But PSYLOCKE once KO’d him after a Boomer Time Bomb, and she’s like Strength 2 or something.

So I went with Toughness 8 as a mini-Powerhouse, which allows him to be weakened by the Blast to be finished off by a kick.