The Four Horsemen is a skilled team of mercenaries. They do everything from assassinations to third-world military training exercises. While their history goes back over 14 years, there have been a number of changes during that time, both in structure and in membership.

The two constants have been the presence of their leader, “The Nature Boy” Ric Flair and his closest friend and comrade, “The Enforcer” Arn Anderson. They form the foundation upon one of the most notorious metahuman fighting teams.

They were founded in 1986 by a National Security Agency desk-jockey named J.J. Dillon and the NSA’s star field operative at the time, Richard Flair. Intra-agency politics had gotten ugly in the previous two years and Dillon faced competition for missions and funding from several other government agencies, most notably his CIA counterpart, Harley Race.

At the same time, Flair was facing similar competition in the field from a military intelligence operative named Terry Allen (aka “Magnum TA”).

Dillon and Flair compared notes and decided to pool their resources. Dillon put Flair in contact with three other NSA agents, Ole (pronounced “Oh-lee”) and Arn Anderson (uncle and nephew) and Tully Blanchard. Flair and the other three hit it off quickly. They agreed to work together to take care of Flair and Dillon’s “problems.”

First, Flair and Ole Anderson made a show of force in Harley Race’s office. The intimidation tactic worked and Harley retired within two days of the attack.

Then Blanchard and Arn made an non-sanctioned ambush on Magnum TA while he was on a mission in France. While Allen survived the assault, he was confined to a wheelchair as a result of being dropped on his head repeatedly by Arn Anderson. Both missions were considered a success.

Flair and Dillon were free of their rivals and had, as a bonus, assembled a strong power-base from which to call should the need arise. The four field agents and their bureaucratic organizer went their separate ways.

However, before the men left Dillon’s office, Arn made a statement that would be instrumental in the naming of the group: “The world hasn’t seen an elite group that can cause this much destruction since the Four Horsemen of the Apocalypse.”

Arn Anderson and Tully Blanchard continued working together in the field under the code name, “The Brainbusters.” Ole was promoted to a desk job, and Flair continued to raise hell, worldwide.

Despite the separation, the men stayed in touch, and any time one of them ran afoul of trouble they couldn’t handle (professional or otherwise), the other “Horsemen” would be there within 24 hours to handle the problem.

Arn and Tully went so far as to help Ole’s son get into a prestigious college with a “choice word or two” to the Dean of Admissions. And Arn assisted Flair more times than he could count. He did everything from serve as godfather to Flair’s oldest son, to assist in the “disappearance” of a private investigator hired by Flair’s wife.

Word spread around intelligence circles that “The Four Horsemen” were not to be trifled with.

After two years of smooth operation, the group found itself at a turning point. Blanchard decided to retire from service and join the clergy. While he would not write off his friends, he didn’t feel that his current responsibilities to the group were consistent with his newfound faith.

With Ole retiring even from his desk job and moving to the Bahamas, and Blanchard’s turn of faith, Flair and Arn decided that replacements might be in order.

Their first selection was a young newcomer to the NSA named Barry Windham. His father, “Blackjack” Windham, had been an old friend of Ole’s and Barry came highly recommended.

The second replacement was Lawrence “Lex Luger” Pfohl, a pro-bodybuilder. His career had come to an end with the discovery of his superhuman strength. He was recruited, put through training in record time, and inducted into the Horsemen.

Luger was temporarily assigned to domestic jobs. He became unofficial partners with the costumed hero, Sting during the year he was on that assignment. What neither the NSA, his Horsemen teammates, nor Sting knew was that Luger was crooked, even by Horsemen standards. He saw the entire arrangement as an opportunity to sell out and retire.

Luger betrayed Sting to the Chicago mob for a payoff. Sting barely escaped with his life.

With Flair and Anderson’s assistance, Sting gained a measure of revenge against Luger. While Luger was out of the country (presuming Sting dead), Sting arranged for Luger’s wife to meet his girlfriends – all 12 of them, whom Sting had met while partnering with Luger over the previous year.

The fallout led to a nasty divorce, which led to the uncovering of Luger’s personal business dealings, which led Luger to prison.

In the aftermath of the Luger incident, Sting was offered a freelance job with the NSA. He was inducted into the Horsemen as Luger’s replacement.

After three successful missions, the team was sent on a mission in Uganda to bring in the terrorist, Abdullah the Butcher.

Flair and Anderson set up an ambush on Windham and Sting with the aid of their original (retired) partners in the Four Horsemen, Tully Blanchard and Arn’s uncle, Ole Anderson. Ole had missed the action (and money) while Blanchard found himself to be a less-than-successful minister (and missed the money).

Windham was killed and Sting was played for a sucker once again. Flair, Blanchard, and the Andersons received a handsome payoff from Abdullah. They used it to set the Horsemen up as an international mercenary force.

The reunified Horsemen operated for several years in Africa, Southeast Asia, the Middle East, and every other sensitive hot spots in the world. Ole was killed during a skirmish with Abdullah the Butcher. And Tully retired after a close call with the Japanese crime lord, The Great Muta.

Flair and Anderson went about recruiting new business partners, this time with an honest eye towards keeping them around for quite a while.

The first choice seemed like a no-brainer. Curt Hennig, the son of the legendary CIA agent, Larry “The Axe” Hennig, was rising through the ranks of the NSA. He was being hailed as the next Ric Flair. Unfortunately, he had Flair’s sense of ethics as well, and accepted Flair and Anderson’s job offer to join the Horsemen.

The next choice was almost as easy. Canadian costumed mercenary, Chris “The Pegasus Kid” Benoit had a history of coming out on the winning side of battles with both The Great Muta’s organization and Japanese superhero, Jushin “Thunder” Liger. Although Liger publicly unmasked Benoit, exposing his identity to the international news media.

Anderson made the offer and Benoit jumped at the chance. His first mission with them even earned him a new nickname – after dropping the terrorist Sabu on his head and breaking his neck, Benoit was no longer the “Pegasus Kid”, he was “The Crippler.”

Benoit was a perfect choice, but Hennig, known as “Mr. Perfect” was anything but. On his first mission as a Horseman, he attacked Flair from behind and revealed his alliance with The Great Muta’s organization. Flair and Anderson were both hospitalized and Anderson underwent delicate neck surgery.

When the two men returned to action, Anderson was forced to take a supervisory and managerial role due to the risk of injury to his spinal cord.

Retired member of the Chicago Bears , Steve “Mongo” McMichael approached Benoit about the fourth position in the Horsemen. Benoit brought this to Flair and Anderson and they agreed – McMichael had discovered limited superhuman strength and was willing to learn the skills necessary to be a Horseman. His name-recognition was seen as an asset in finding potential customers.

Anderson began training “Mongo” to replace him. McMichael’s training was only underway by three weeks, when Anderson reported the sad truth. Mongo had the drive and the strength, but neither the aptitude nor the focus for special operations or intelligence work. He was clumsy, distracted by an ongoing divorce, and suffering from a serious drinking problem.

Flair, Arn, and Benoit fired him. Had he known more about their operations, they would have killed him outright.

Malenko came with an established track record, having trained a score of metahuman operatives and having innovated a style of martial arts which allowed him to go toe-to-toe with superhuman opponents, despite his own lack of powers and relative small size.

Flair jumped at the opportunity to make Malenko a Horseman, and the current membership roster for the group fell into place. They continue to work for anyone with the money and intestinal fortitude to hire them.

Dillon, Flair, and the rest have long standing issues with Checkmate and/or Amanda Waller. Replace the Magnum TA storyline with a feud with Rick Flag or Harley Race with either Sarge Steel or Amanda Waller (or the head of Checkmate at any given point in their history) and you’re good to go. 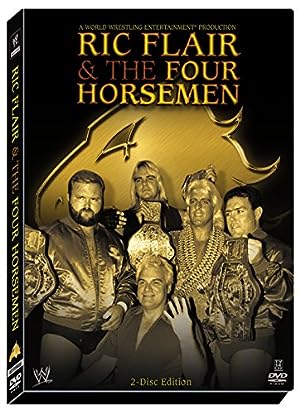 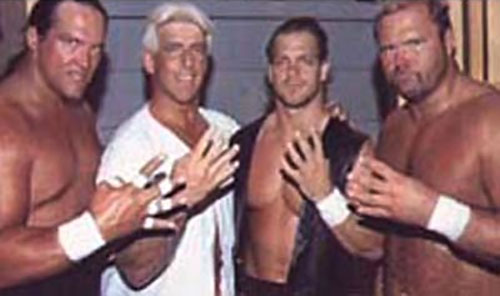