For years, Drake had no special skills to aid the vampire hunters. But even then, his courage and persistence made him a constant annoyance for Dracula. He was pretty much an average Joe who fought against horrific odds, even though he was way over his head.

He was no trained fighter like Blade and he possessed no special knowledge about vampires like Rachel Van Helsing or Quincy Harker. Still, he seemed to be a valuable ally against Dracula, almost in the sense of being cannon fodder while the other vampire hunters worked to knock off Dracula.

Nowadays Drake is a quite competent, experienced and level-headed adventurer, with a good amount of skills. His main asset is a gun built using the remnants of the Drake fortune. Nicknamed Linda  (aka “the exorcist”), it is a big high-tech rifle which fire active nanotech ammunitions. These shots can disrupt occult energies in many, many ways. But he can still be dangerous even without the gun.

Frank Drake has a real problem : his original family name (changed generations ago) is Dracula. He’s a descendant of the Lord of the Vampires through his second wife, Maria Dracula. The family managed to forget its origins after changing its name, and became old money.

However, this changed with Frank, an inconsequential millionaire playboy. He lost the familial fortune, except for the ancestral castle in Transylvania. Drake wanted to sell the castle, and went there. This led to the death of his fickle lover, the doom of the treacherous man whom he thought was his best friend, and Dracula being freed.

Still, Drake managed to put up a surprisingly good fight against the Lord of Vampires. He also destroyed his girlfriend before she would become a vampire. All of this proved to be too much for him and he later attempted suicide.

He was rescued by Rachel van Helsing and Taj Nital, one of Helsing’s team of vampire hunters. He joined them in order to avenge himself from his losses.

Drake became a close associate of Quincy Harker, the main vampire hunter of the later half of the XXth century. He and Rachel had a somewhat chaotic romance, but they separated a few months after Harker’s death. Rachel was later turned into a vampire but managed to destroy herself before it was too late.

Drake joined Hannibal King and the man known as Blade. They assisted the Sorcerer Supreme, Doctor Strange, in using the mystic Montesi Formula to destroy almost every vampire on Earth.

Later, the three men established an occult investigation agency. It lasted for years. But Blade was sent to an asylum and Drake returned to a normal life in order to rebuild some of his fortune.

He always comes back

During the following period he met and married Marlene McKenna, a woman seeing the same psychologist as he did. However, Dracula inevitably came back. Marlene was then possessed by the soul of Rachel van Helsing for a time. Drake managed to save his wife and stab Dracula. Later, with Blade and Katinka, they defeated Dracula, destroying him and preventing Marlene from becoming a vampire. 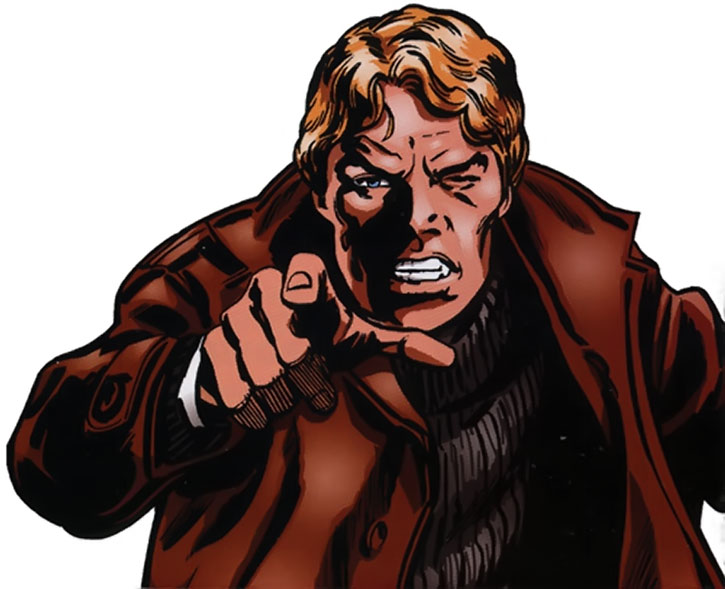 However, the effects of the Montesi formula were slowly dissipating. This allowed some vampires to return and made King slowly become vampiric again. King went to Drake and Blade, and they started a new occult investigation firm, Borderline Investigations

However, this time, it was just a front. The three men, whose lives had been destroyed by the occult, were going on a crusade intended to eradicate mystic threats.

This led to tensions between Marlene, who didn’t want her husband to deal with the occult, and Frank. This eventually estranged Marlene from Frank. Shortly after, Frank Drake and Hannibal king were seemingly killed while fighting Varnae. Drake had overloaded his gun Linda to blow himself and Varnae out of existence.

Apparently, however, the explosion fused Drake, King and the essence of Dracula to allow the return of Dracula. The prevailing theory as of this writing is that this gestalt has since broken apart, and Drake and King are still alive.

For years, Frank Drake was uncertain of himself. While he was courageous and loyal, he still was full of self-doubt. This changed after an encounter with Brother Voodoo, while caught in a trap that Dracula had lured him into. Drake emerged from the ordeal a changed man. He was confident and at times, even reckless. But no longer was he plagued by self doubts.

He has consistently been growing stronger with the years of hardship and combat, and is now a pretty decent adventurer. His courage and levelheadedness are quite remarkable for an once-ordinary man.

The Nightstalkers are a low key operation, and could be inserted in the DCU. The Montesi Formula would have been cast when Drake, King and Mister E. went to a vampire-dominated dimension.

In the Tomb of Dracula era, Frank Drake was much less competent than he is today. His stats were :

Equipment:
Standard vampire hunter equipment, but nothing paid with HPs – his gear was easily lost or destroyed. 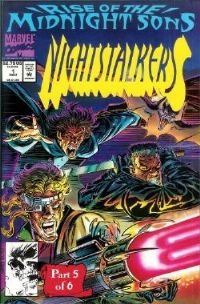