It started in 1977 as pulpsCheap, often lurid novels in the US during the 1920s and 1930s-like novels. But is is now much better known as a series of graphic novels that started in 1990. There also were spin-offs, including two movies.

Within the narrow confines of the genre, the execution is good. And one character in particular is both interesting and easy to use in other stories. Freddy could fit into most sorts of thriller set between 1950 and 2050, and perhaps beyond.

Freddy is a good (but not extraordinary) soldier, and an elite pilot.

He is extensively qualified with both fixed- and rotary-wing aircrafts. He can operate anything from a light helicopter to a large jet airliner. Kaplan can confidently perform dangerous aerial manoeuvres. His piloting is very accurate – even under heavy fire.

Freddy has unclear grey and black market connections. What they are and how he developed them is unrevealed, but he can come up with surprisingly useful and appropriate gear, people, intelligence and services. 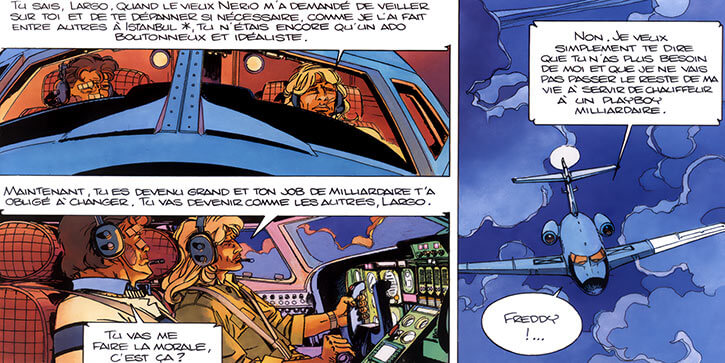 Circa-1990 Israeli song for a professional pilot…

“Freddy” was raised in a kibbutz in Northern Galilee  , near the Golan frontier.

His parents had fled Ukraine in 1953 after the death of Stalin  , and eventually reached the young state of Israel.

During the 1973 Yom Kippur war  , the kibbutz was razed. “Freddy”, aged 12, lost both of his parents. He and other orphans were then communally raised.

Standing over the corpses of his mother and father, he swore he would make all Arabs pay. As soon as he was 18 he joined the officer school of the Israeli air force, and by the time he was 25 he was a Captain and a F-16B  fighter-bomber pilot.

In 1986 he and two wingmen were sent on a mission in Southern Lebanon to arclightOlder military slang for heavy air-to-ground bombing a Hezbollah  stronghold. ”Freddy” happily headed the mission and accurately delivered his payload, killing 30 and wounding nearly 300.

However, the militants had left the camp the day before the strike. All casualties were noncombatants — chiefly women and children.

To mitigate the resultant international scandal, the IDF made a big show of determining that “Freddy” was to blame. They sent him to a military prison for three years.

Since the brass knew full well that the massacre was not his fault, they soon had him transferred to a minimum-security facility.

Neither the fairly innocuous prison nor the loss of his rank were important for “Freddy”, though. He was haunted by the slaughter he had committed.

Furthermore, he now realised how meaningless the oath he had sworn after his parents’s death had been.

Six months after his trial, “Freddy” decided he could not live in Israel anymore. He stole a military truck and raced across the Neguev toward Eilat. He then swam to Aqaba, in Jordan.

Joining the crowd of tourists enjoying the beaches, he stole a wallet with a lot of cash in it and had himself groomed.

This is how he stumbled upon the infamous multibillionaire Nerio Winch.

The cunning Israeli explained that he was the Lebanese agent of an imaginary US firm. He then cased the private plane of the American delegation Winch was with. Soon, “Freddy” used this intel to sneak into the jet.

Within 48 hours of jumping over the wall of his prison, “Freddy” was airborne and US-bound.

However, the plane had somehow been infiltrated by a band of air pirates passing themselves for a part of the crew. They apparently had ties to Iraq.

“Freddy” was in a dire position. Lacking a passport, not being supposed to be there and being Jewish.

However, one of the American passengers tried to be a hero. This resulted in his death and that of the hijacker he had attempted to take as a counter-hostage.

The would-be hero dropped his gun practically in “Freddy”’s lap. The Israeli opened fire and killed the lead hijacker.

Attacked by another pirate armed with a knife, the ex-pilot hesitated to gun her down. She slashed open the left half of his face with her blade.

Blood in the cut

However, both pilots had been pirates, leaving the hijacked plane stranded in a forlorn piece of Iraqi desert.

“Freddy”, his face still open to the bone and bleeding heavily, volunteered to pilot the plane out before things could get worse.

With some improvised bandages and a triple dose of morphine from the onboard pharmacy, he managed to fly the DC-9  to Cyprus. And land it there before collapsing.

Within days, Winch determined that the “Lebanese representative”’s was actually the Israeli Ari Ben Chaim. Winch had Jerusalem abandon their half-hearted hunt for him.

Winch also arranged for a false passport establishing the now-vanished Ben Chaim as Frédéric Kaplan (“Freddy” for short) from Monaco. The name was based on Ben Chaim’s grandfather, Friedrich Kaplan.

To help with his cover, Freddy started wearing his hair long rather than in a military buzzcut. His face was mostly fixed, though he kept a rather impressive scar.

“Kaplan” was then hired by Winch to find his adoptive son Largo. Investigating in Tibet, India and Burma, Freddy finally found Largo in Bangkok.

Freddy would soon become one of Largo’s few genuine friends.

His main mission for Nerio Winch being accomplished, “Freddy” ran unclear activities around Monaco, Nice and the Mediterranean in general.

He apparently developed contacts and markers there. Thus, he would later be able to procure smuggled firearms and to have thugs and other shady types run surveillance.

His contacts may be with the extended networks of the Corsican Mafia and/or the Southern France’s Milieu  .

From time to time, Freddy would provide piloting and airlifting services to Largo. That often took place in dangerous and unusual circumstances, for instance as a getaway pilot.

This continued after the death of Nerio Winch. Largo had Freddy become an employee of the W Group. Many of Largo’s adventures relied on Freddy providing impeccable air transport and exfiltration.

However, Largo was now a multibillionaire increasingly involved in business issues. This scene held little interest for the bohemian, less-than-legal Freddy. Freddy eventually told Largo that he would recruit a new pilot as his replacement, then be on his way.

Some weeks later Freddy’s fine choice for a new pilot, Silky Song, joined the ranks of the W Group.

Though Largo was dismayed to lose one of his very few close friends, he understood and respected Freddy’s choice.

Before Freddy left, Largo asked him to help represent W Group business interests. This was part of an effort to turn around an ailing American factory of skis.

Though Freddy was not comfortable pretending to be a rich investor out to revitalise a small business, Largo needed somebody he could entirely trust. Kaplan grudgingly agreed to the job as one last favour to his friend.

During the imposture, Freddy met the daughter of the ski factory, a young blind woman named June. Freddy and June were immediately attracted toward each other. As a result, he changed his plans so he could stick around – and continue playing the role of an investor.

As his relationship with June blossomed, Freddy decided to stay in Deer Point, Montana, to live with her and help run the factory. His years of shady activities, danger and adventure are now apparently over.

Even before getting his face slashed, Freddy had a bony mug with high cheekbones, giving him a severe and even sinister look. After he lets his hair grow to his shoulders, acquires the huge scar and gets older, he can look scary.

People have called him “some hippie killer”. He comes across as somebody who would be typecast as a brutal hitman or Klaus Kinsky-like madman.

Freddy started cutting his hair to a more mainstream length when he helped Largo in Montana. He may have kept them this way since. 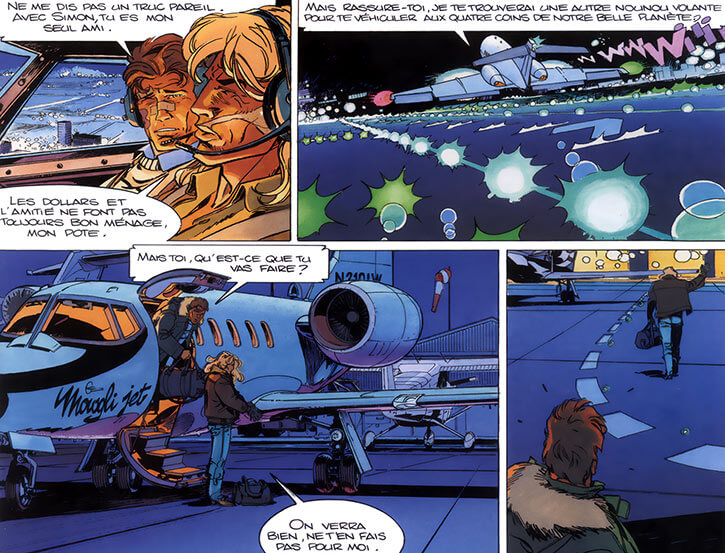 Despite his sinister looks, Freddy is a relaxed, smart and adventurous professional. He’s basically a drifter, enjoying the seedier side of life and selling his services as a pilot to all sort of… interesting parties.

Much of his demeanour may stem from his guilt over the bombing run in Lebanon. It may be a penance of sort. He seemed to consider himself to be a pariah living in the fringes, avoiding mainstream society and enjoying the company of people living by their own rules.

Freddy is a cool, collected, resourceful guy with a taste for travel, risk and adventure. He’s a partcularly loyal friend and ally.

He has simple tastes, such as beer and whiskey. Though he usually seems aloof, he enjoys having fun and painting the town red with his few close friends.

Everything he does is quietly competent. And he has the can-do, forward-thinking, flexible attitude often associated with former IDF military officers.

Freddy’s years of being a suspicious outsider who considered that his life had been irretrievably wrecked apparently ended when he met June. 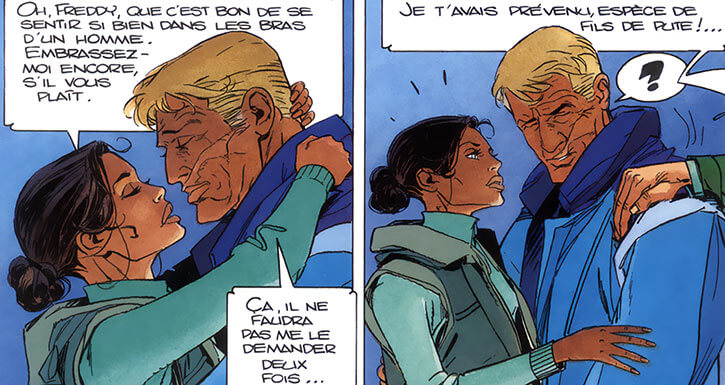 “Locating this fucking castle was pretty tough. What’s the rest of the our flight plan ?”

“It’s not me leaving your side, Largo – it’s your youth. If you ever feel nostalgic, you know where to find me.”

Freddy could easily have met a young Bruce Wayne while the latter was a globe-trotter. He would be an ally and occasional Wayne employee. He knows that Wayne isn’t as foppish as people say, and can be a competent traveller. But he doesn’t know about Batman.

Freddy may even have taught piloting to Bruce, Dick and Tim. He may occasionally work for Henri Ducard.

Area Knowledge (airports), Familiarity (IDF equipment and protocols ; military and civilian flight equipment and protocols ; Jewish traditions and folklore), Languages (French, Hebrew and likely some Russian).
While working for Largo Freddy is considered to have High Credentials with the W Group. Before his court-martial he had a Rank (Captain) within the Israeli air force.

Gritty with specific notes that will be developed in a possible Largo Winch writeup.

Freddy owns a private jet (a gift of Nerio Winch). It looks like a Learjet 35A  , though in-universe it’s a “Mowgli Jet”.
Largo Winch has always been able to procure the types of aircraft necessary for Freddy to conduct his missions.
He does not seem to be usually armed, though.

Detective (Legwork) is there for people with rules about Unskilled use of that Subskill.

Military Science is undemonstrated. But it’s likely given his Tsahal training.