The Freedom Force is a super-team that emerged in 1985. That’s when Mystique’s Brotherhood of Evil Mutants rebranded and allied with the US gov’t.

This article is meant to be read right after the corresponding Brotherhood of Evil Mutants team profile.

Though presenting them separately is clearer, these are two stages of the same organisation.

Purpose:
Superhuman field team working for the Federal US government.

During the heydays of the Mutant Registration Act, they were the primary response team against dissident mutants.

Over time, Mystique increasingly sought to do a proper civil service job, such as saving lives. This became clear during the 1987 crisis in Dallas. But if she’s not around, most members are liable to revert to type.

Extent of operations:
Primarily the US mainland. 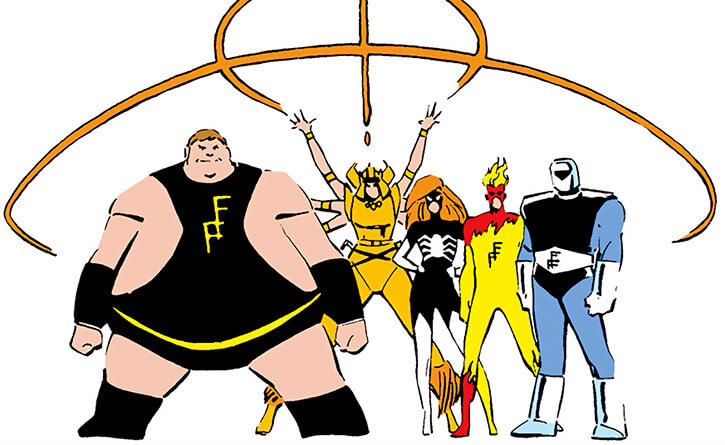 She reports to Dr. Valerie Cooper of the Commission on Superhuman Activities.

Membership requirements:
Approval by the US government.

Freedom Force was issued a modified heavy transport helicopter. It is usually piloted by Mystique, though Pyro was later trained as a backup pilot. Crimson Commando and Super Sabre also received training.

The helicopter is usually drawn as a high-tech imaginary one. But twice it resembles a CH-53 Super-Stallion  .

At least one was destroyed in action.

It is also equipped with :

They also have a Forge-modified fast jet, with at least transatlantic range. This one has its own pilot and copilot, presumably detailed by the USAF.

Freedom Force is also equipped with miniature tactical radio links. But during most engagements, these are not necessary.

Stored in the helicopter is a man-portable laser cannon. It’s shoulder-fired and has a scope. But it was only used once, and as a cutter (to cleave through a stone pillar).

So now we need some 1985 music, lessee… Heh, I suppose that Eurythmics’ Would I lie to you fits Mystique and the Freedom Force.

As the Freedom Force prepared, Dr. Cooper had the mysterious Spiral join. This markedly increased the team’s power.

The Force was sent to arrest Magneto, and thus demonstrate that it was worth the government’s support.

They confronted him at the USHMM  , where he was attending an event with Kitty Pryde. The X-Men responded, thinking that the Brotherhood was attacking one of their own.

Given the setting, Magneto surrendered. The Force’s first op was thus a complete success.

Its members received a conditional pardon as they formally entered Federal service. It would only be maintained as long as no further crimes were committed, and results remained good.

This is what I mean…

In 1986, the Force confronted the X-Men in San Francisco. Anti-mutants sentiment had risen just as fast as Mystique expected, and the X-team was now hunted.

The Force overcame the X-Men, mostly thanks to Spiral.

But with Mystique absent they hadn’t followed procedure. Their arrest was therefore illegal. The SFPD objected, and the Force left empty-handed.

While hunting down the mutant Rusty Collins, the Freedom Force clashed with X-Factor. These alleged mutant hunters secretly were the original X-Men, and the Force had realised that they were sheltering Collins.

The subsequent clash didn’t go well for the Force.

However, the Brotherhood of Evil Mutants old-timers had recognised the X-Men. Mystique thus arranged for the exposure of Angel (Warren Worthington III) and X-Factor.

This would soon destroy the group and essentially kill Angel.

One world one Vision

Not long after that, the Vision (“Victor Shade”) committed massive intrusions into governmental computer systems. In the US, the Commission on Superhuman Activities reacted strongly, wanting every single Avenger in prison.

The Freedom Force confronted both the East and West Coast teams as they were having a baseball match. Spiral again proved a formidable asset, and the Force prevailed. The Avengers ended up imprisoned within the Vault.

But Freedom Force member Spider-Woman couldn’t stand that. She freed the Avengers and went AWOL.

The Avengers were eventually cleared – much of the government’s intel was disinformation.

Cooper later struck a deal with the hounded Spider-Woman.

However, the Commission on Superhuman Activities kept a hard line. This resulted in Steve Rogers abandoning his Captain America identity. The Freedom Force helped train his successor, John Walker.

In 1987, the Crimson Commando and Stonewall agreed to join the Freedom Force rather than do hard time.

They had been minor WWII super-heroes. But in more recent years they had become killer vigilantes. A clash with Storm (Ororo Munroe) had led to their arrest.

Their friend Super Sabre then volunteered to join the team.

Destiny then foretold that the X-Men would soon die. Mystique therefore led a Freedom Force strike to take the X-Men out. Her actual goal was to force Rogue (Anna-Marie NLN) to leave the team before it was too late.

The Force didn’t fare badly. But they were forced to ally with the X-Men when major time disturbances threatened Dallas, TX. The two teams helped control the damage, stemming from a clash between Forge and the Adversary. 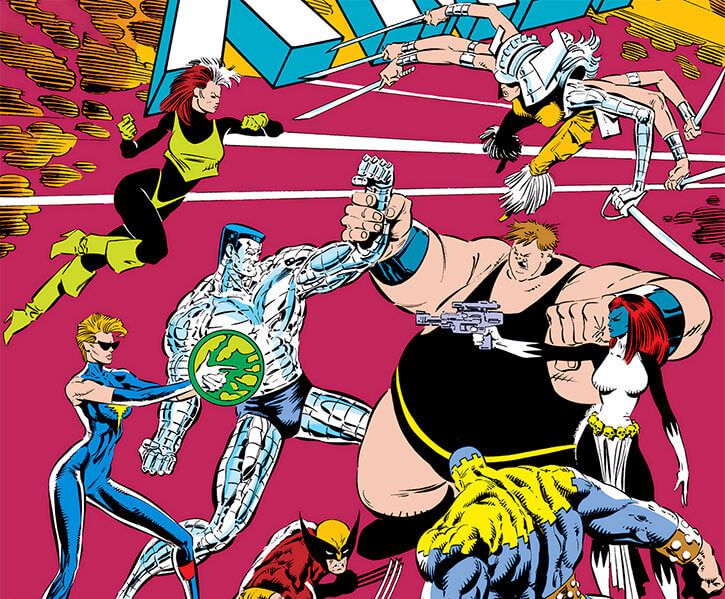 However, the X-Men — including Rogue — seemed to be heroically slain to stop this crisis.

This in turn resulted in a brief clash with the New Mutants, as Magik (Illyana Rasputin) teleported in to kill Forge and avenge her brother.

Another confrontation took place as Cyclops (Scott Summers) and Marvel Girl (Jean Grey) came to investigate the fate of Madelyne Pryor and her son.

Some Freedom Force members became aggressive, under the pretext that neither Cyclops nor Marvel Girl were registered. But their ill-coordinated attacks were sternly repulsed by the couple until cooler heads prevailed.

In 1988, the Freedom Force laid a trap for mutant rights terrorist cell the Resistants. But the plan partially failed, as Resistants member Mentallo (Marvin Flumm) telepathically sensed it.

Captain America (John Walker) intervened. But he beat up and captured all attackers. The plan had instead been to let the Resistants flee in order to locate their HQ. Still, his brutal assaults likely saved Freedom Force lives.

There were also attempts at arresting Rusty Collins and his friend Skids (Sally Blevins) during that era. Collins was irrationally seen as a high-profile threat.

One such attempt led to a conflict with Collins’ friends the New Mutants. At that point, the Mutants were trying to evacuate a mystically possessed Danielle Moonstar.

As usual, Freedom Force refused to listen. They tried to bully the young mutants into submission. The Blob’s ebullientCheerful and energetic. blabbering also left the New Mutants suspecting that the registration was a cover for weaponising mutant children.

A battle on Liberty Island ensued. The New Mutants won, but lost control of the possessed Moonstar.

Who was that masked man

Pyro and the Blob were then sent to an unspecified rural burg. They were to locate an unregistered mutant girl, Amanda Fallows.

The pair acted like prejudiced bullies, the locals despised strangers, the terrified Fallows was in hiding, and the registration law was as iniquitousGrossly unfair and morally wrong. as ever. Thankfully, a passing Daredevil (Matt Murdock) intervened. This allowed young Amanda to flee.

The Force also responded to a New York City rampage by the Alliance of Evil during the earliest days of the Inferno. But the Alliance had already been engaged by X-Factor. Mystique et al. simply waited to arrest the unconscious Alliance members.

Some months later, they helped X-Factor wrap up after Nanny and Orphan-Maker were defeated.

The battle of Muir Island (or at least one of those)

In 1989, the Force was ordered to deploy in Scotland, on Muir Island. The job was to provide relief to Dr. Moira MacTaggert’s team, who was under siege by cybernetic bandits the Reavers.

Mystique had to be strongarmed into accepting the mission. Especially since it was a request from Forge, whom she still blamed for Rogue’s apparent death.

Furthermore Spiral, Super Sabre and Crimson Commando were already on another mission.

The battle went badly for all parties. On Freedom Force’s end :

While Mystique was grieving, Pyro and Avalanche went AWOL.

They were manipulated by the Acts of Vengeance  planners into attacking the Avengers, but failed. Avalanche and Pyro fled, leaving the Blob behind.

All three rogue operatives were recovered and returned to the team. Presumably, Mystique successfully advocated that they had been tricked once the full extent of the Acts of Vengeance conspiracy was revealed. 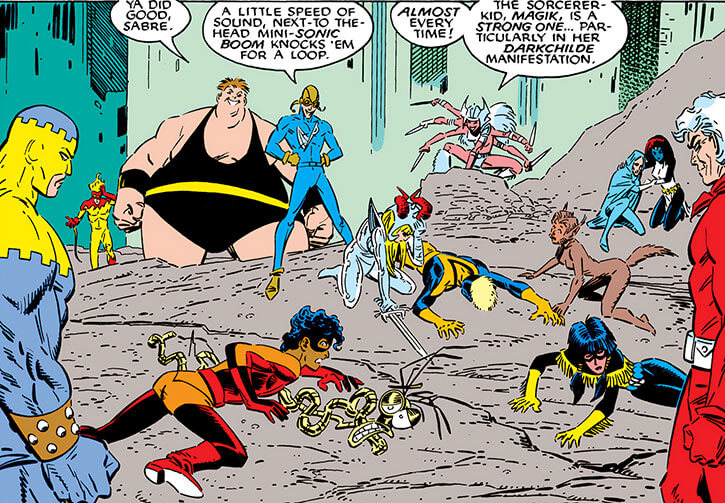 However, the incident was leveraged by Presidential advisor Roland Blaisdell to launch a new project. Codenamed X-Factor, it would enhance soldiers using gamma rays, cosmic rays and the like.

This project was mostly a failure due to medical complications harming the volunteers.

In 1990, Freedom Force conducted a covert raid against a Mexican drug-trafficking compound.

The unpalatable job was to recover a captured Senator Kelly. Despite the opposition of creepy drugs lord Señor Muerte (no relation) and his power-armoured henchmen, the mission was a success.

Though the pair had narrowly stopped a carnage at the hands of Nitro (Robert Hunter), the Crimson Commando told the press that they were both murderous mutant criminals.

However, this heavy-handed manipulation backfired, drawing enmity from :

Several Freedom Force members ended up in a grudge fight against Cable. But he and some New Mutants clobbered them. 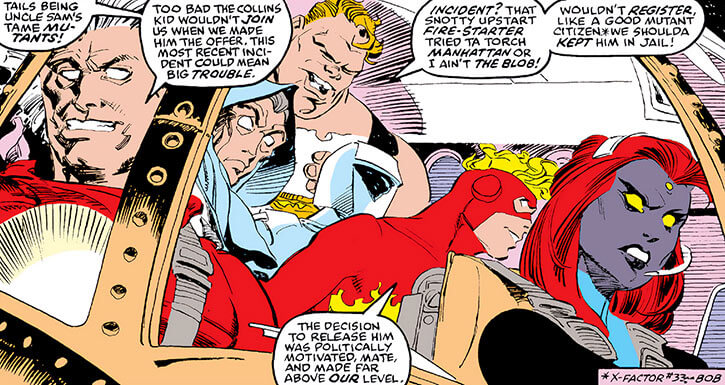 Mystique later sent Pyro, the Commando and Blob to check a possible Hulk sighting. This was in part her payback over their Acts of Vengeance betrayal.

The sighting turned out to be genuine, and all three agents were left unconscious by the Hulk.

In 1991, Mystique acted upon notes left by Destiny about Firestar (Angelica Jones).

The notes were cryptic, but Darkholme decided to arrest Jones as an unregistered mutant. From there she’d convince her to join the Force, which seemed to align with Destiny’s predictions.

Freedom Force then rallied and located Mystique. They thus accidentally discovered the Arms of Salvation’s headquarters. The Force engaged the security there and shut down this loathsome organisation.

Mystique realised that she couldn’t recruit Firestar, as the hateful Spiral would likely murder Jones. She instead helped Jones and her dad fake their death, without informing the rest of the team.

Soon after that, the Force was sent to stop a catastrophic uprising at the Vault super-prison. But the team fell into an ambush.

Venom (Eddie Brock) and the Grey Gargoyle (Paul Duval) tried to force them to cooperate. Mystique pretended to go along.

A large contingent of Avengers then came in. Freedom Force fought at their side, even though the Avengers and the warden clearly didn’t trust them.

The Force performed fairly well, though they were clearly overshadowed by the Avengers’ heavyweights. 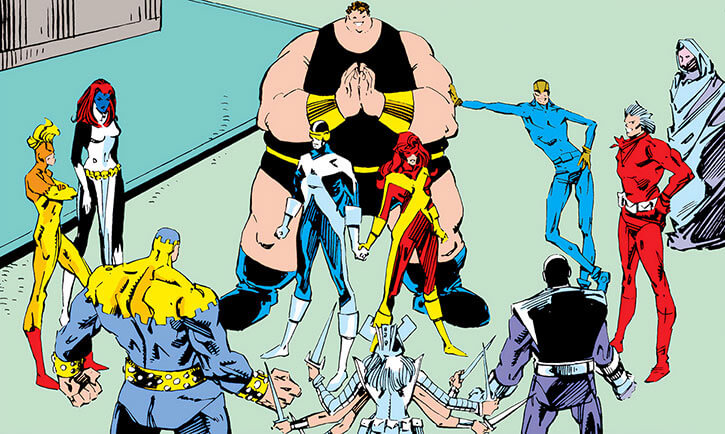 A Freedom Force team was then sent to Kuwait. This was during the early days of the 1991 Gulf War. However, they fell into a trap set by Iraqi super-team Desert Sword.

The bloody battle resulted in the death of Super Sabre, and the thorough maiming of the Crimson Commando. To save the Commando’s life, Avalanche left Blob and Pyro behind, and they were captured by Iraqi forces.

At this stage, the casualties were too high – and Spiral was manifestly uncontrollable. The only two operatives left, Mystique and Avalanche, were discharged.

All the better names were taken

By this point, Dr. Valerie Cooper had changed since her days as an authoritarian hardliner. Talks had started with Professor X, perhaps through Mystique.

A deal was reached. The Professor would facilitate the recruitment of a mutant field team, mostly made up of former X-Men. These would work for the government, but with firmer ethical boundaries and in the interest of human/mutant relations.

This project, led by Havok (Alex Summer) re-re-used the name X-Factor. It went live but a few months after the demise of Freedom Force.