Frenchie is a crack pilot. He’s trained with props, helicopters, jets and advanced VTOL vehicles like the Mooncopter. He’s also an excellent driver and powerboat operator.

His main weakness his low Hero Points  total. As he’s, ultimately, but a sidekick.

Jean-Paul “Frenchie” Duchamp is Marc Spector’s closest buddy. They met in Africa when both were mercs, and started regularly working together. When Spector died, was revived and became the Moon Knight, Frenchie became his pilot, aide and confidante.

For a several years, Frenchie operated with Moon Knight both around the globe and in America. They fought criminals, dictators and supervillains and regularly saving each other’s life. But eventually, Frenchie was badly wounded when Killer Shrike tore the Mooncopter apart. Duchamp narrowly survived the crash, but his legs were crippled.

As a man of action, took his handicap pretty badly. However, while Moon Knight was confronting the machinations of Seth the Immortal, it was discovered that Duchamp could access superpowers and call on the abilities and personalities of his ancestors. He thus regained his mobility as Bloodline.

At one point, in his Pierre Latrec ancestor persona, Jean-Paul went into a rage and pummelled Moon Knight. Moon Knight had to drain Duchamp’s life in order to save himself, and accidentally destroyed the Latrec persona and abilities. Duchamp survived the ordeal, though.

Frenchie is a smooth operator and a cinematic commando, pilot, getaway wheelman and mercenary. He’s smart and perceptive, and enjoys life as a suave adventurer.

He is more grounded and mature than Moon Knight. Thus, he often serves as a friendly adviser, especially when it comes to romance. He loyally follows Moon knight’s orders like any good sidekick. Duchamp draws from some of the same archetypes as Magnum, P.I..

During the last few issues of Marc Spector : Moon Knight, he grew tired of the “Frenchie” nickname. He preferred to simply be called Jean-Paul (the closest approximation of pronunciation in English being Jaw-Pohl).

Frenchie nearly always wears a pair of aviator’s shades and keep his hair slicked back, along with a small 1930s moustache.

The version of the Mooncopter illustrated below is one of the most modern ones – a VTOL jet shaped much like Moon Knight’s crescent darts.

Frenchie (pointing his gun at guards) : “There’s one hundred thousands in the case and fifteen rounds in the Browning. Is that enough for the helicopter and an hour’s worth of silence ?”
Greedy guards : “You may have our silence for free, sir.”
Frenchie : “You can keep the case along with the bills, then. It’s sharkskin. Step away from the rotors now, gentlemen – a pleasure doing business with you.” 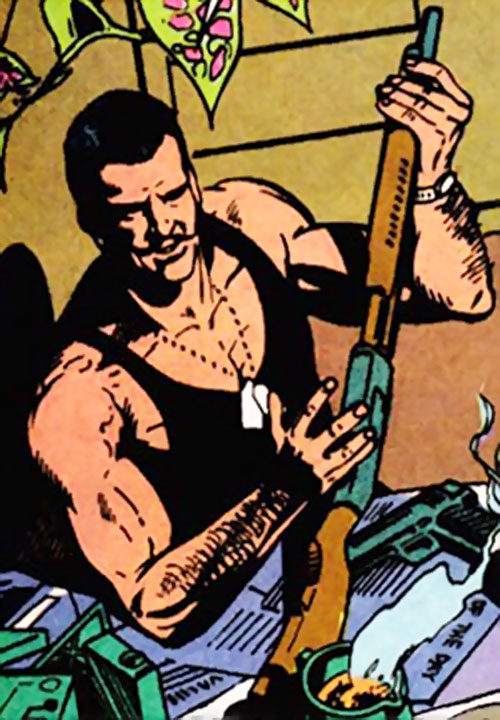 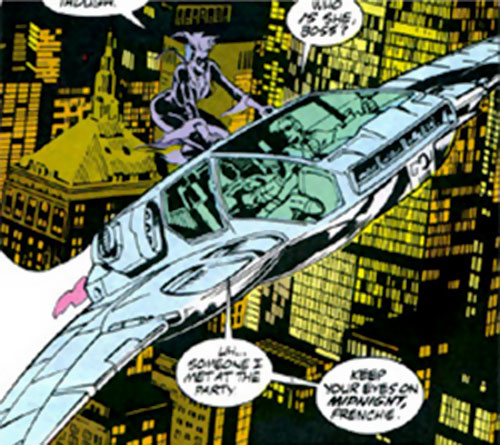