She described her skin as being steel-hard, though she never seemed to be as durable as Luke Cage – Captain America could knock the breath out of her with his shield if she wasn’t braced for it, and James Proudstar could take her out in two good blows.

Frenzy is fireproof, though some superhumans can generate heats of such magnitude as to affect even her.

Cargill is an excellent street fighter, and definitely knows how to behave in a fight.

Whilst under the effect of Michael Nowlan’s enhancement power, Frenzy was even faster in a fight. Her strength seemed at least quintupled – she could topple a three-story building in seconds.

Early on Frenzy was drawn very tall, but that soon was dropped. Our No-Prize Hypothesis  is that her increased stature was a unique side effect of Michael Nowlan’s enhancement power.

Joanna Cargill was born to a military father and a devoutly Christian mother. Unlike her big brother Gareth, her birth was an accident rather than planned. She was also born premature, leaving her sickly and rachitic.

Gareth joined the Army to carry on the proud familial tradition, but though she was fascinated by the military it was clear that little Joanna would never be fit to serve.

Her father resented her. As his alcohol problem worsened he began to beat the sickly girl. When Gareth Cargill was killed in action, Mr. Cargill lost it. He started pounding on the teenaged Joanna when he saw her touching Gareth’s beret, kept as a memento.

In an unexpected spurt of superhuman strength, Joanna seemingly killed her father by accident. She ran away from her home.

Ms. Cargill apparently served in the US military. Her branch and MOS  were never mentioned, but from a comment she made she likely was infantry. She may have served in a recon unit. Rangers or airborne infantry are possibilities – racial and gender integration took place considerably earlier in the Marvel Universe.

After leaving the service, she became an international mercenary. In 1985 she saw Magneto (Max Eisenhardt) being tried in Paris.

Considering that he was the voice of mutantkind and she had to do something, she began working for Apocalypse (En Sabbah Nur), a powerful mutant supremacist. Cargill became the field leader of his mercenary team, the Alliance of Evil.

The Alliance clashed several times with the original X-Factor team in 1986. They occasionally had the upper hand as their powers were magnified by those of a fellow mutant called Michael Nowlan. Nowlan was freed by X-Factor – which hit the Alliance hard since his powers had addictive effects and withdrawal was harrowing.

The team resurfaced 2 years later, rampaging in New York City to make a statement against the then-current Mutant Registration Act. This occurred during the early days of the Inferno crisis, which subconsciously influenced people to act in an irrational, aggressive manner.

The Alliance was defeated by X-Factor and their students, and arrested by governmental team Freedom Force.

Frenzy was apparently imprisoned for nearly 3 years at the Vault, a special US prison for superhumans. She was a minor part of the big attempted breakout in 1991, but it failed.

However, mere weeks later she could attend the luxury cruise offered by Superia to pitch her Femizons project. One suspects that Superia had many of the guests freed from prison.

Brief return of the Alliance

The Femizons project fell apart, but Frenzy was soon recruited by Harness (Erika Benson) along with two other Alliance of Evil operatives, Tower and Stinger. The trio accompanied Benson as she forced the mutant Piecemeal to reconstitute the mutant menace Proteus (Kevin MacTaggert).

The operation was successful until the Alliance was defeated by the New Mutants (soon to become X-Force), though Harness and Piecemeal escaped.

The Alliance was briefly imprisoned in a special prison in Québec. However, Cable and his tough guys returned to interrogate her to learn who had hired Harness. In a poignant homage to South American dictatorships, Cable forced her to talk by dangling her from a helicopter and dropping her.

Frenzysurvived this fall thanks to her superhuman robustness. By 1993, she was again free – and among the throngs of villains who visited the landmark A.I.M. weapons expo in Boca Caliente.

Shortly after visiting the expo, Cargill had an epiphany and joined the Acolytes of Magneto, becoming one of their original field operatives.

A brutal mutant rights militant, who at times seems to be as anti-human as she is pro-mutant. Though she is educated and articulate, she has a huge chip on her shoulder. It seems to stem from a past of oppression for her genetics, her skin colour, her social class and perhaps her gender.

She hates moderates (such as Xavier’s students and their peace agenda), and delights at opportunities for class revenge. She once wrecked a school for rich preppies by throwing police cruisers at it, which may have been her definition of a perfect afternoon.

In combat she’s professional — and knows when to cut and run — but can be too aggressive. One gets the impression that she could be a much greater person and activist, but is held back by her anger.

“I believe you need a lesson in respect, young mutant ! Remember this – when you awaken !” (KER-WHAP !)

(Grabbing Boom-Boom by the collar) “Not bad, for a child. Now try those little power pellets on me !”

“I know those kids ! They’re X-Factor’s puppies ! Get the moldy green one first — he’s a power leech !”

Equipment:
A communicator built into one of her bracers.

Michael Nowlan’s power worked remarkably well on Frenzy. On top of the normal enhancements it apparently made her taller. Whilst she is under this effect, Cargill gains the following :

Nowlan-enhanced strength and stature ● 8 points ● Descriptor: Mutant augmentation
– Growth 1, Enhanced Strength 2, Enhanced Fighting 1.
– This was only active when she was enhanced by Michael Nowlan, and is *not* factored into her stats.

With the Nowlan-enhanced powers Frenzy is more dangerous by one PL, give or take. 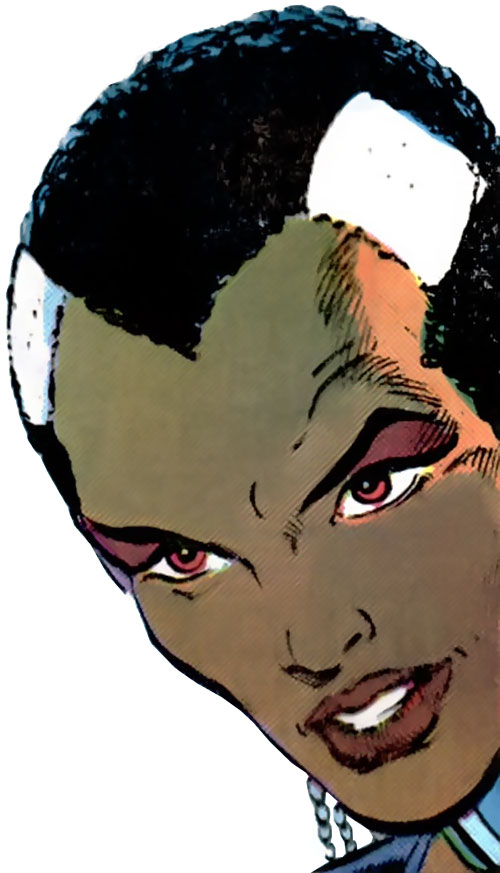 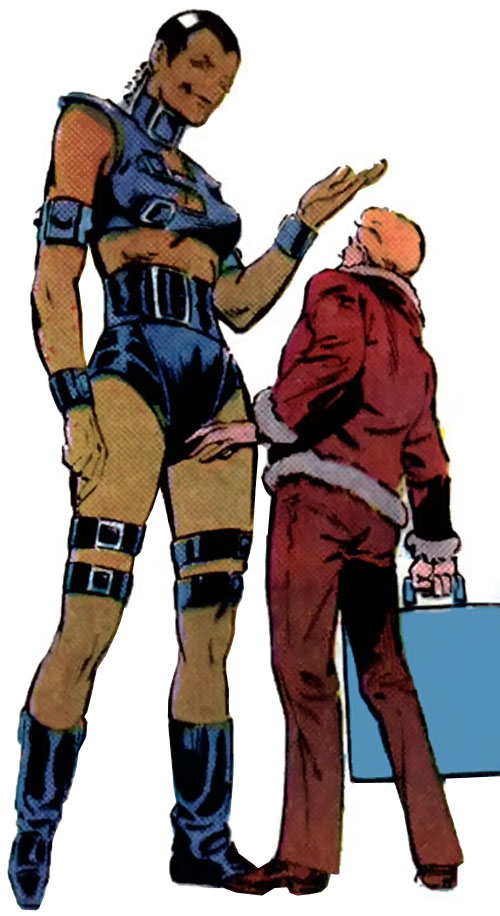