Fritz Sablinova was in his prime an elite commando and daring special forces soldier. He retains much of this prowess and physical power. He is also a brilliant tactician and skilled spy.

As a member of the Genesis Coalition, he somehow obtained a powerful battle armour. Although less advanced and versatile than an Iron Man armour, it matched it in some respects.

Fritz Sablinova was Ernst Sablinova’s brother. Possibly his twin, given their astounding physical resemblance. They both operated the Wild Pack – Fritz as the tactician, and Ernst as the field leader. They occasionally used their similar features and acting ability so that Ernst Sablinova could be at two places at once.

Even Ernst’s daughter, Silver, didn’t know about Fritz’s existence. She thought he was Ernst on those occasions they worked together.

After Ernst Sablinova was seemingly killed by Ivan Trefkov, Fritz was devastated. Growing obsessed by the absence of a body, he decided to let himself be captured by HYDRA to find out the truth. However, Fritz never discovered what had happened to Ernst – or that Ernst was still alive.

After months of torture, Fritz used his remarkable acting ability to convince Trefkov and his lieutenant Dmitri that he had been thoroughly broken and would now serve them. He helped them form the Genesis Coalition, a HYDRA splinter group. Fritz backed them up with his tactical acumen, just as he had drafted many of the plans the Wild Pack used over the years.

Fritz’s plan was to build the Genesis Coalition and use it as his weapon against HYDRA. These organisations would hopefully destroy each other, allowing Sablinova to kill Trefkov and von Strucker in the end.

Coming to a head

However, the torture had actually affected him. Fritz developed a semi-subconscious hatred of Ernst for having been the public figure in charge all those years.

Although he schemed to protect Silver Sable from Trefkov and from interfering with his plans, he also subconsciously hated her. She too had taken the Wild Pack away from him.

When the conflict between the Genesis Coalition and HYDRA came to a head in Bosnia, Fritz revealed his true colours. He sided with Silver Sable and the Wild Pack, executing Dmitri.

Over, his insanity eventually took the better of him. As Silver Sable took apart the defeated Genesis Coalition and murdered Trefkov, Fritz tried to kill her for destroying the Coalition and taking away Trefkov. As he was about to incinerate Silver Sable, Fritz was shot dead by the Foreigner.

“No doubt Dmitri here has been playing games with your emotions. I could liquefy him with this battle armor.” 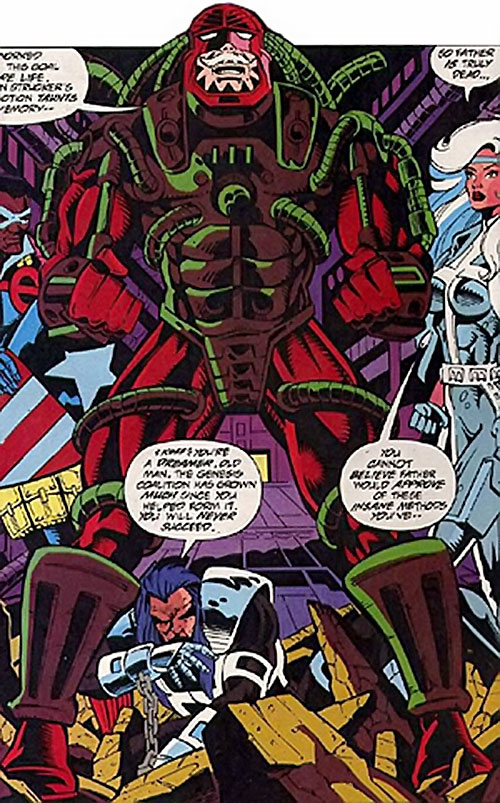