Leblanc is a US Navy-trained combat diver, and underwater demolition expert.

He also has years of experience as a thug-for-hire.

Secondary sources  also mention talents (high level of strength in the legs, mastery of savate, “Class 10” strength once enhanced (below)…) that are nowhere to be seen in primary sources.

The Frog-Man suit had the following capabilities :

Frog-Man was once issued a speargun. It seemed markedly more powerful than the short-range weapons used to fish underwater. So I’d imagine it was a custom-built crossbow. Or perhaps a modified Greener light harpoon gun.

Frog-Man was then turned into a superhuman by Count Nefaria. He thus became a mutateA person mutated after birth, as opposed to a born-this-way mutant with an amphibian appearance.

He could make superhuman jumps, covering at least a dozen metres from a standing start. These allowed for powerful jumping kicks.

Still, a young Nightcrawler (Kurt Wagner) took him out without difficulty. 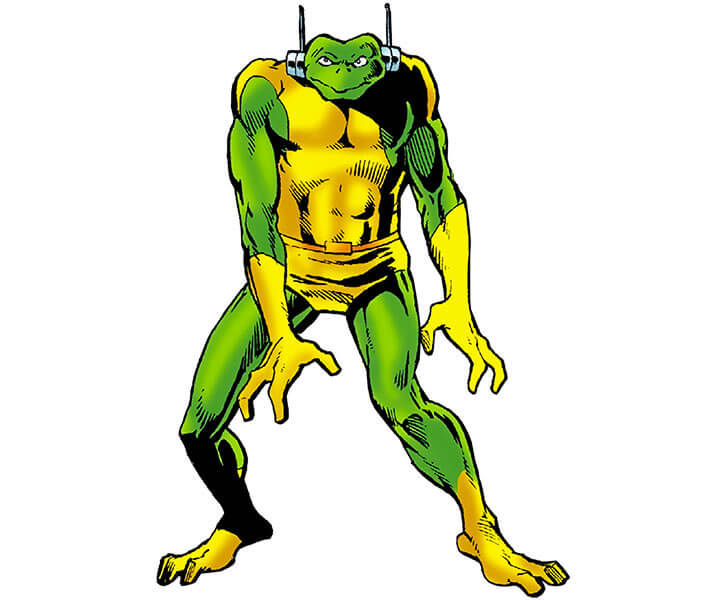 Frog-Man formerly was a French citizen, and enlisted with the US Navy.

He then ran from the Navy, after the discovery of his unspecified crimes.

Traditionally in genre fiction, said crimes would involve smuggling heroin. Especially since the “French Connection” networks  were at their height back then.

We can further imagine that he first served as a multilingual advisor, then transferred to the US Navy just in time to return to Việt Nam in 1958.

This corresponds to the in-between years when the Underwater Demolition Teams  had clearly pivoted toward special operations, but had yet to become the Navy SEALs.

During the early 1960s, François Leblanc was a thug in New York City. But he had to be discreet, since the Navy was still after him.

He knew some other skilled legbreakers, including Gordon “Monk” Keefer.

Leblanc was specifically recruited by the Organiser (Abner Jonas) to become Frog-Man. 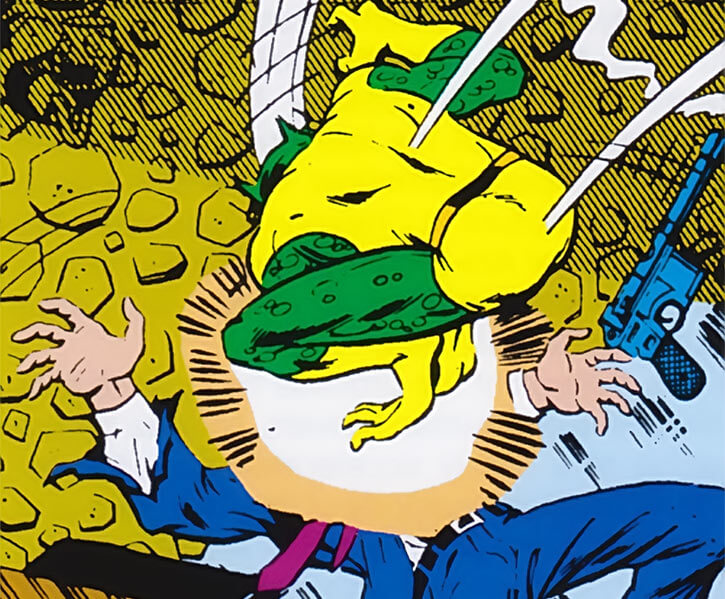 Originally, Leblanc is drawn with almost animal-like features and posture. This is presumably artistic exaggeration

His speech bubbles do not feature an accent. He also still has some military turns of phrase.

When not in costume he usually wears a green suit.

Frog-Man comes across as nervous and sweaty – a hunted man. But when working he’s collected and professional.

He’s loyal toward his employers and follows orders well.

Once mutated, he had difficulties dealing with his new state. He insisted that he was still human, and insulted mutants to feel superior and “more normal” than them.

Misc.: Leblanc was wanted by the US Navy back during the 1960s.

I’d lob in Language (Vietnamese) to help explain why the US Navy recruited him. But that’s way too speculative.

The first Wrestling attempt by Daredevil against Frog-Man completely failed. But not long after that a Throwing Manoeuvre works fine. So I assumed murky, intermediary Grappling Immunity APs.

No Swimming APs for the FROG-MAN SUIT. Daredevil had no issues catching up with him whilst underwater, weird as it seems.

Acrobatics and Martial Artist are a half-hearted gesture at representing material from secondary sources. He doesn’t use them in the actual material, but having these Skills doesn’t contradict the evidence either. So you can keep or ditch them.

Acrobatics, Evasion and Martial Artist are all Powered Skills, and Contingent Upon Jumping.