The Việt Nam Veteran is an experienced man with extensive military background. He’s an expert hand-to-hand combatant and is a master of military arms. During his days in ’Nam he probably learnt a lot of useful military skills also.

His main advantages are his huge strength, physical toughness and his powerful will.

Frost (usually just called “the Việt Nam vet”), was relaxing himself at the Titty Twister bar when the Gecko brothers showed up. As an ex-con he was probably just taking it easy in one of the worst bars in the world. Also a cool guy, he was sitting in the centre, near Seth’s company and Sex Machine.

The Việt Nam veteran had been in ’Nam in 1972. His entire squad had been killed, except for him. Sneaking up from under the bodies of his dead friends, he had attacked the opposing Việt Cộng squad during that night, and killed them all single-handedly.

After the massive slaughter that occurred at the bar, the Việt Nam Veteran and Sex Machine were the only survivors apart from Seth’s company (Richard Gecko, Jacob, Scott and Kate). After demolishing several vampires in hand-to-hand combat, Frost started a rambling speech about his exploits in ’Nam.

But Sex Machine, having been bitten by a vampire undetected by the others, turned into a vampire. He attacked Frost from the behind, biting into his neck, while he was finishing his story. The huge veteran, enraged by this, threw Sex Machine straight through the nearest wall of the bar. This act opened up a big hole for all the waiting vampires outside.

Soon the Vet himself turned into a vampire.

What is a man ? A miserable little pile of secrets !

Later, when Seth’s team had gotten themselves some weapons, Frost opposed the minister Jacob. Jacob had a wooden bat and a shotgun, which he held as a cross to scare away vampires.

Unfortunately, the Việt Nam vet, didn’t care the least about the cross, and assaulted Jacob. Jacob then rushed against the vet and pushed the shotgun straight through the stomach of the vampire vet while firing it. While using the shotgun to shoot vampires behind the vet, the vet himself was just staring at the weapon.

Soon, he turned into a pile of goo, permanently ending his days of combat.

The Việt Nam veteran is a big, Black man in combat fatigues. He has a moustache and a big cigar in his mouth.

He moves smoothly and being an expert at the martial arts, he doesn’t carry additional weapons.

He’s a tough guy with quite smooth talk, and occasionally stops to tell stories from his days in ’Nam. People, despite the situation, actually stop whatever they are doing to listen to his stories.

Even though ’Nam is his favourite subject, he seems to be pretty much at peace with himself. For example, in the middle of the mayhem that usually was the Titty Twister, he was just sitting silently building a little house from matches while drinking his beer. He also thoroughly enjoys a good smoke.

The vet is real good at the martial arts, and he knows it. He will take on any opponent, even supernatural ones, bare-handedly. His combat mentality is pretty close at hand, since he immediately started to impaling the vampires on stakes once they showed up. Occasionally, he loses control too (“everything goes black”) and enters a berserker rage.

The vet is also a good team player.

The Việt Nam veteran can be placed in any loud bar. He’ll probably be telling stories about ’Nam and the people will actually listen. Quite probably he’d pretty soon get into a fight, from which he should emerge victorious.

In that same bar people like Sex Machine would be common. DC’s roughest customers, like Lobo, would fit in such a bar. 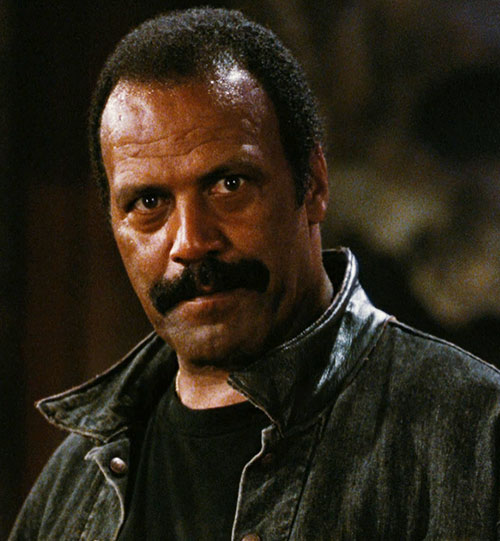