From Dusk Till Dawn is a trashy 1996 action/horror/comedy/whatever movie by Tarantino and Rodriguez. It has ultraviolent criminals, vampires, buckets of gore and blood, crazy nonsense, lots and lots of fighting, cheap nihilism and general junky bad taste. Also, Salma Hayek (damn).

We thought the characters might be useful in some games.

As a professional thief, Seth Gecko has access to a number of useful skills, such as crime planning, firearms use, hostage taking, driving, hand-to-hand combat and knife use.

Seth is also quite strong, tough and fast, and can defeat a slightly superhuman being in hand-to-hand combat.

Also intelligent and cunning, Seth has a really good way with words.

Seth Gecko is a professional thief. According to his own statement he’s also married.

In 1988 he performed a bank robbery in Scott City and killed two police officers while doing so, but was caught and jailed in the Kansas State Prison. Seth’s deranged brother, Richard Gecko, organized and managed to perform a freeing of Seth from the prison. Four more officers were killed during this escape.

The brothers then performed another bank robbery, hitting it big time, and they planned to flee to Mexico. While being hunted by the police, Texas Rangers and the FBI, they used hostages etc. to get away. While at a World of Liquor store, in order to buy a map, Richard managed to get them both into a firefight with a local police officer and the shopkeeper.

After viciously dispatching of them both, they continued their trip down to Mexico, leaving a burned down wreck of the gas station. In that fight, Richard had been shot straight trough the hand, leaving a big hole in it.

The television reported on the brothers whereabouts and crimes (summarizing them as having killed 4 rangers, 8 officers and 3 civilians in total).

Somewhere in Texas the brothers rested in a motel along their latest hostage, Gloria. When Seth was out getting some food, his brother Richard killed the hostage in an insane fit of rage. Seth went out and found other hostages in the motel, a small family of a man, named Jacob, and his daughter, Kate, and son, Scott.

Jacob was a minister by trade, but had lost his faith to God after his wife had died in a car accident.

The Gecko brothers took control of the family’s housewagon and traveled down to Mexico with them. After having passed the Border Guard they went on to the meeting place where the Gecko brothers would meet their contact person, Carlos, in order to get to their safe house in El Rey, Mexico.

The meeting place was a bar named the Titty Twister, which is short for “worst f-cking, sh-tty and perverted place in the world”.

A night at the Titty Twister

Seth decided that the family had done their role very well and he would release them after they spent the evening drinking with them. Jacob, having no choice, accepted. The surroundings, with constant fights etc, became rougher as time went on and the brothers, who’d kicked the crap out of the door guard upon entering, became part of a fight. 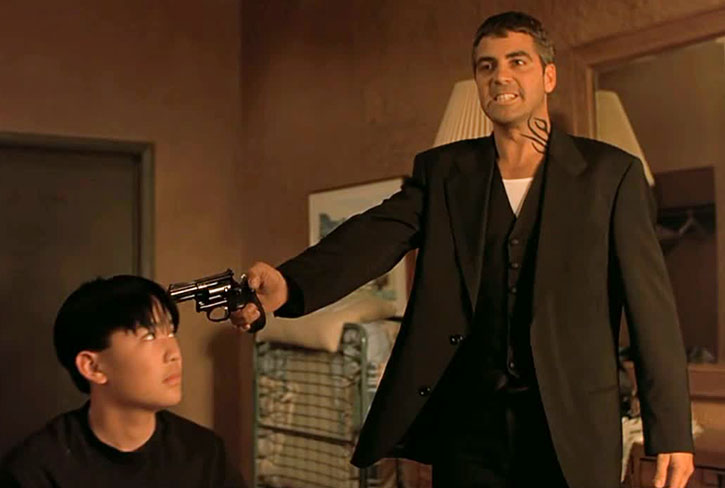 Richard got a knife straight trough his injured hand, but managed to defeat the other scum anyway along his brother.

The main event of that evening had been a show performed by a stunning woman with a snake, who’d been…uh…seducing Richard during her dance.

That’s when things turned really shitty… when the Gecko brothers stood triumphant, even having killed some opponents, the woman spotted Richard’s bloody hand… and turned into a vampire (!).

She jumped right at him from the behind and sucked his blood from the neck, killing him outright. Upon that happening, many of the guests including the barkeep and the playing band turned into vampires.

A massive slaughter ensued in the bar, while the doors were locked. Only a few survived the experience : Seth, Richard, Jacob, Kate, Scott and two other thugs, one named Sex Machine and the other a black Việt Nam war veteran.

After having discussed their predicament, and re-killing Richard, who’d turned into a vampire himself, they began putting stakes through the hearts of the humans who’d falling victim to the vampires. The killed vampires, themselves, had burnt up upon dying. More vampires arrived, and although they defeated them too, Sex Machine was bitten – but didn’t tell the others.

The Việt Nam war veteran began discussing his previous exploits in ’Nam, when Sex Machine turned into a vampire and bit him in the neck from behind. The vet threw out Sex Machine straight through the wall, leaving an opening for the large bunch of vampires that were waiting outside.

The team had to flee from the scene, getting overwhelmed by vampires. They retreated into something resembling catacombs. Soon thereafter the Việt Nam war vet turned into a vampire himself.

Jacob was left behind, but found a wooden stake and a shotgun. He put them together as a cross, and made his way through the vampires, once in a while shooting some, until he reached the others. Unfortunately, Jacob had been bitten and would soon turn into a vampire himself.

The team found lots of smuggling goods and used the stuff there as weapons. Jacob blessed some water (and probably all their weapons), which was used in Scott’s water gun and balloons. Kate got a crossbow, Jacob kept his shotgun like a cross and Seth made a ’staking machine‘ from a drill and a stake.

Being pressed for time, since Jacob, their most powerful weapon, would turn into a vampire any minute, they charged the army of vampires outside.

Bit of a Butch Cassidy and the Kid moment

In the bloody battle that occurred all of them almost died. Only Seth and Kate were still alive when dawn arrived, along the sun. Set’s contact person, Carlos came into the bar with his men and as sunlight hit every spot inside, all the vampires exploded.

Seth, pissed off, since basically everyone had died, hit Carlos, but joined him to get to the safe house. Feeling sorry for Kate, he gave her a bunch of dollars from his stack, and left. Kate, having lost everything, probably returned to the States.

Upon ending, it was shown that the ’Titty Twister‘ was in fact part of an old Nahua temple (the roof being a sacrificial altar) with lots of catacombs and similar…

Seth Gecko is a charismatic man with above average built and good looks. He has black hair, brown eyes and looks confident. He wears a fine black suit along a white shirt.

He very often has a magnum revolver in his hand, while he gives instructions to the victims…

Seth Gecko is a professional thief. He specializes in hostage situations. While cunning (perhaps that’s why his name is ’Gecko’, like in the lizard), uses the straight approach of hit and run heists at banks. He expects everyone to jump to his orders, since he will, in fact, kill them if they disobey or screw with him. He is very surprised if they talk back to him.

While aggressive, and a murderer, he holds his word if given. He’s a smooth talker and enjoys talking to his hostage. He loves his brother, Richard, although he has trouble understanding what’s wrong with him and will occasionally get very angry with him (punching him unconscious if he makes too much trouble).

Apparently, Seth likes guts, and was impressed by Jacob, who, despite impossible odds, was courageous and strong. He takes no crap from anyone, no matter how small the insult was, but will hit them down hard if opposed by anyone, often by word, and sometimes by force.

Possibly, Seth lives by some sort of thief’s honour code. He might even be a member of a Yakuza-like organization, as implied by his body tattoos.

Of course, Seth’s tattoos are probably just prison tats (the flames on his neck are fairly typical prison tats and the Māori-style lines on his arm aren’t uncommon either, though prison tats usually look a little cruder due to the materials used. Like many other ex-cons, Seth probably had someone go over them with better ink when he got out) but don’t let that stop you.

“This is my kind of place.” (upon reaching the “worst shithole in the world”)

“Psychos do not explode when sunlight hits them.” (commenting on vampires)

Although highly effective, Seth is still a normal man. He can be inserted as a professional thief in any area of the States, while being tracked by the police, Texas Rangers, FBI or the like. The players could have to track him down to some really nasty place, like the ’Titty Twister‘, or they could see him perform a bank robbery, and be faced with a hostage situation.

Another way to make Seth’s character more interesting is a lack of history, in a sense. He’s wandered from place to place and group to group, only working with someone long enough to make the latest score and making more than a few enemies on both sides of the law along the way including partners with whom he had a falling-out.

This has made him somewhat infamous, but he never brings it up because it’s all ancient history to him, he only cares about the here and now and maybe getting the big score on which he can retire.

It might be entertaining to introduce him to the PCs as an obviously competent and tough individual and then let various third parties gradually clue them into to all the hilarity in which the Gecko brothers have participated in the past. 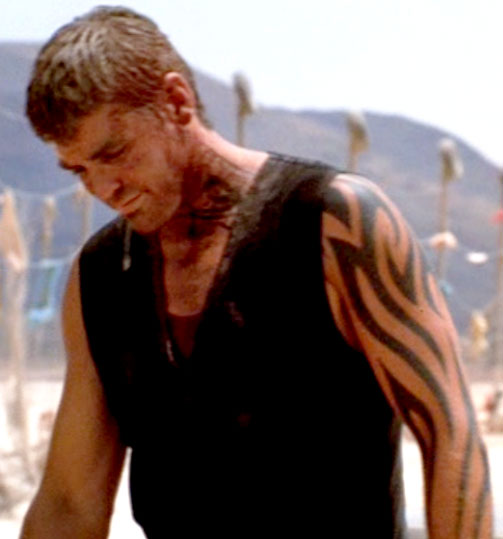