Jacob mostly possess ordinary everyman skills, such as driving. Having been a Minister he is an excellent orator and knows his way well around religion and the occult. He was also a surprisingly effective strong combatant with both melee weapons and firearms. He was probably fueled to great deeds by his moral conviction.

His greatest asset, though, is his belief in God, which is a terribly powerful weapon against the hell-spawn.

Jacob was a minister somewhere in the southern United States of America. But he lost his love to God after his wife had died in a car accident. Although still a believer, although not of a loving God, he found that he would no longer be the right man for his congregation.

A disheartened widower he went searching for the truth and peace out there with his daughter, Kate and his son Scott, in a large housewagon. The Lord, indeed, worked in mysterious ways as Jacob and his family were taken hostage by notorious criminals the Gecko brothers.

The Gecko brothers were notorious criminals and robbers being hunted by the whole Texas Police as well as the FBI and media. The brothers wanted to reach a hideout in Mexico, and forced the family to take them there using the wagon.

The gang finally reached the contact destination given the Gecko brothers, a perverted bar named the Titty Twister in Mexico. The brothers were supposed to meet another criminal named Carlos, who’d take them to their final safe house in El Rey, Mexico. Unfortunately, that’s when things turned even for the worse.

When the Gecko brothers stood triumphant after a huge bar brawl, involving a sexy woman named Santanico Pandemonium, even having killed some opponents, the woman herself spotted Richard Gecko’s bloodied hand… and turned into a vampire (!). She, the leader of the vampires, jumped right at him from the behind and sucked his blood from the neck, killing him outright.

Upon that happening, many of the guests including the barkeep and the playing band turned into vampires. A massive slaughter ensued in the bar, while the doors were locked, and only a handful survived the experience: Seth, Richard, Jacob, Kate, Scott and two other thugs, one named Sex Machine and a black Việt Nam war veteran named Frost. 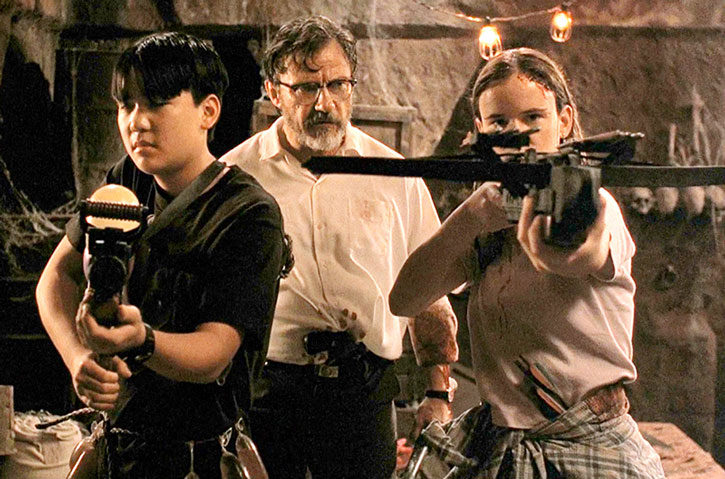 At this point, being persuaded by Seth, Jacob reluctantly rediscovered his lost faith in God (in game terms, he paid his Guilt fee) as well as his powerful abilities against the hell-spawn. He, simply put, realized that if there were hellish, evil vampires, there just has to be the opposite, a good God, as well. Too bad this realization came at the very moment of his own doom.

After having discussed their predicament, and re-killing Richard, who’d turned into a vampire himself, they began putting stakes through the hearts of the humans who’d falling victim to the vampires (the killed vampires, themselves, had burnt up upon dying). Each staked corpse turned into flame and ashes before they could resurrect as vampires.

During the staking, Sex Machine was bitten, although he hid this fact from the others. The Việt Nam war veteran began discussing his previous exploits in ’Nam, in order to boost morale, when Sex Machine turned into a vampire and bit him in the neck from behind.

The vet threw out Sex Machine straight through the wall, leaving an opening for the large bunch of vampires that were waiting outside. The team had to flee from the scene, getting overwhelmed by vampires, and retreating into something resembling catacombs.

The team found lots of smuggled goods and used the stuff there as weapons; Jacob, from his Minister days, possessed certain paranormal abilities and thus blessed some water (and probably all their weapons), which was used in Scott’s water gun and balloons.

Kate got a crossbow with blessed tree arrows, Jacob kept his shotgun like a cross and Seth made a ’staking machine‘ from a drill and a stake. 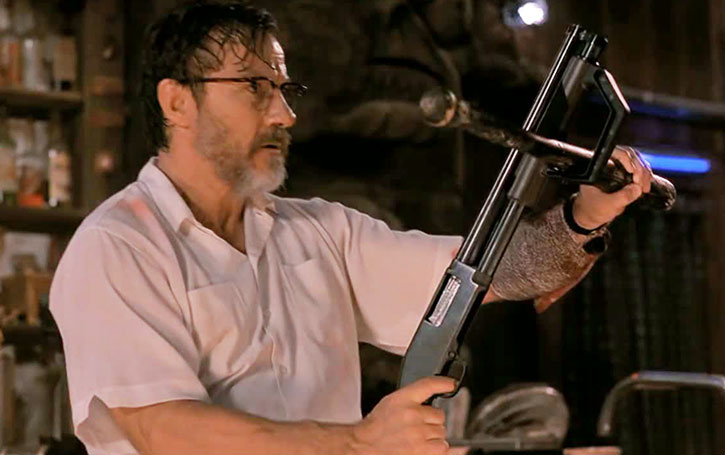 Being pressed for time, since Jacob, their most powerful weapon, would turn into a vampire any minute, they charged into the army of vampires outside, as a last desperate measure. In the bloody battle that followed almost all of them died ; only Seth and Kate were still alive when dawn arrived, along the sun.

Set’s contact person, Carlos came into the bar with his men and as sunlight hit every spot inside, all the vampires exploded.

Seth, pissed off, since basically everyone had died, hit Carlos, but joined him, with a discount, to get to the safe house. Feeling sorry for Kate, he gave her a pack of big dollars from his stack, and traveled away. Kate, by her father’s heroic sacrifice had lost everything but her life, and seemingly went back to the States in the family’s housewagon.

Upon ending, it was shown that the Titty Twister was in fact part of an old Nahua temple (the roof being a sacrificial altar) with lots of catacombs and such. A background story of that place from the days of the old wild west, and Santanico Pandemonium, is presented in From Dusk Till Dawn III. This one actually is, in contrast to the second movie, an enjoyable horror movie.

Jacob is an elderly man with greying black hair, grey beard, a pair of reading glasses and rough features (he’s played by Harvey Keitel). He is usually clad in simple, country-like clothing, complete with a cowboy hat, and attempts to keep a low and humble profile until threatened.

He appears to be very focused and stern once he has set his mind to something. If he expects trouble of the physical kind, he’ll slowly remove his glasses, fold them and put them in his breast pocket.

Jacob is a stern, bitter and fair man. His main personality streaks are his great conviction to fairness, justice and keeping your word. He nowadays cares only for his family, having lost his love for God, although not his belief, when his wife had died in a car accident.

You might want to say that his bitterness is directed against his seemingly unjust treatment by God himself, although he will still not hear of any type of blasphemy.

Jacob is an honest man who is deeply offended by sinning and unhealthy living. He is a caretaking parent and his kids are his life. He is rather soul weary and mostly very tired, wanting nothing but a little rest and peace. There is no doubt that he believes in living by the ten commandments, and will try to spread peace and harmony when needed.

When he has set his mind to something he is very focused and possesses great willpower and courage. In any company, he generally keeps a low profile.

After having been a disheartened widower and family provider for a long time, he still has the guts to sacrifice his life for his family and even for the criminal Gecko brothers. His guts and his sense for the just are so strong that even Seth Gecko, a hardened criminal, was deeply impressed by him.

Just before his death, Jacob seemed to find some sort of peace within himself and God. His last wish were for his children to survive, and he probably died somewhat relieved to have found God again.

“Are you such a loser, you can’t tell when you’ve won ? The entire state of Texas, along with the FBI, are looking for you. Did they find you ? No, they couldn’t. You’ve won, Seth. Enjoy it.”

“Wait a minute. There’s no reason to get ugly. There is just a misunderstanding going on here.”

“Before we go any further, I need you to promise me something. I will fight to the bitter end, but when I turn into one of them, I won’t be Jacob anymore. I’ll be a lapdog of Satan. I want you three to take me down, no different from the rest.”

Seth: “Are you a faithless preacher or are you a mean mother-fucking servant of God ?”
Jacob: “… I am a mean hmm-hmm servant of God.”

Men of clergy have a rather low profile in the DC Universe. Still, men like Jacob could be used as is in lower lever magic oriented campaigns. Jacob’s bitterness should be played out, as should his initial lack of trust in God’s judgment.

If God’s existence is proven somehow, as by the appearance of demons, the opposite side of the coin, Jacob will fight hard to save the lives of innocents and destroy the evil, even at the cost of his own life.

He’d probably have met John Constantine in some messy affair (possibly the one in which his wife died) and he might be an acquaintance of some of the odder low-powered magicians of the DC Universe, such as Jesse Custer the Preacher and Baron Winters.

He might also have worked once with the current Supergirl, the Earth-born angel, but would have remained unconvinced of God’s existence even after that.

Advantages:
Iron Nerves, Scholar (Theology; counts as a Magic School and gives a -2 CS OV/RV on appropriate rituals such as those presented below), True Faith.

Rituals: (all of these are based on Christian Theology and require the user to possess both the Occultist Skill and the Theology Scholar):

New Advantage: True Faith
Jacob has a “True Faith” advantage that is typical of his Genre, and some Gothic Horror Genres. This Advantage marks him as being touched by God, and possessing enough faith in the Lord to actually affect some of the works of the Adversary. True Faith has no actual application in itself ; however some creatures have Vulnerabilities to opponents with True Faith, some objects can only be used by wielders with True Faith, and so on.

Value for that Advantage varies according to Genre – whether it’s useful very often or very rarely. 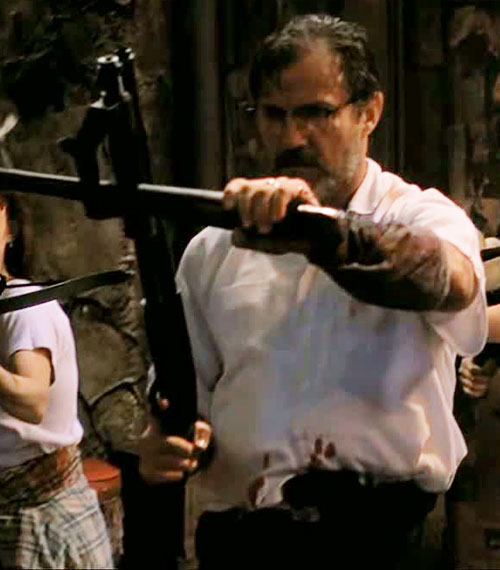