Sex Machine is a very able hand-to-hand combatant displaying high speed, strength and endurance. He often relies on guns or whips to augment his combat efficiency. He can easily defeat a bunch of vampires and has no trouble with local thugs at the bar either.

All of his skills are physical in nature, although he’s good at intimidation (and possibly seduction) also.

For a more detailed history, see Seth Gecko‘s write-up. The man calling himself Sex Machine was at the “Titty Twister” when the Gecko brothers showed up.

Probably some sort of adventurer and womanizer, Sex Machine was sitting in the centre where most action occurred. Snatching beers from passerbys and looking at the half-naked dancing women, he apparently was really enjoying himself.

After the massive slaughter that occurred, Sex Machine, along a Việt Nam war veteran, were the only visitors to survive the assaults apart from Seth’s party (Richard Gecko, Jacob, Scott and Kate).

After having defeated several vampires easily, he was finally bitten himself in the arm by a vampire. Not realizing what it meant, he was very surprised later, when the Việt Nam war veteran was telling about his exploits to the others, to find out that he was changing into a vampire.

He hid that fact. Once fully turned, Sex Machine attacked the Việt Nam war veteran from behind, biting him in the neck. The veteran responded angrily and threw him out from the bar through the wall.

Later, when Seth’s team showed up with new weapons, vampire Sex Machine turned up again. Giving them a real fight, he appeared to be finished once Seth snared his own whip around his neck… and ripped his head off. But, the rest of his body turned into some sort of giant rat and continued the fight anyway.

His demonic existence ended when he was shot in the head by a blessed, wooden arrow, burned up and exploded.

Sex Machine is introduced, in a short and HD video segment.

Sex Machine might be Mexican in origin, with black hair, brown eyes and a black moustache that connects down with a small black beard. He has somewhat sunken in eyes and dark eyebrows and is often seen with a smirk in his face.

His whole clothing goes in black : a black, sleeveless T-shirt, a black leather jacket with lots of metal pieces, black trousers and black boots. Around his arms he wears black arm bands with metal pieces just like in the jacket. The whole appearance, along with the leather whip he carries around, is very macho…

Sex Machine, as the name implies, has quite an ego and quite a personality. This guy likes an adventure and puts himself into the worst places possible for maximum enjoyment. He apparently likes beer, fights, general brawling and women, so that the “Titty Twister”, having all these elements, was probably exactly to his liking. 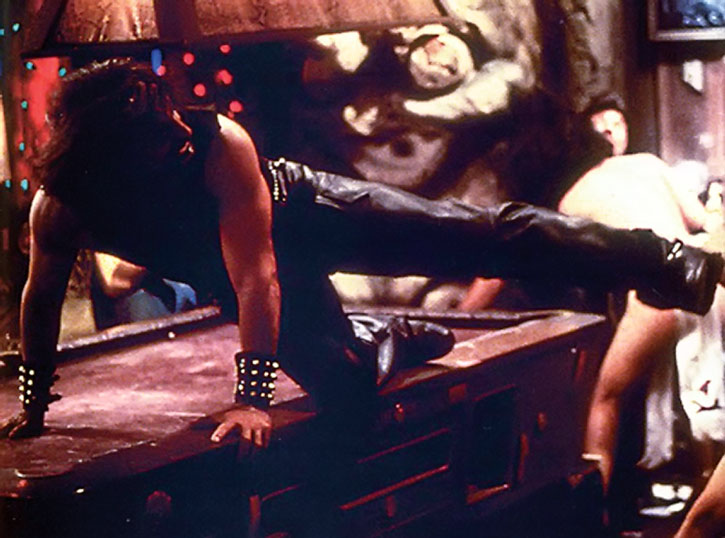 Having an attractive woman in his vicinity completely attracts all of his attention, making him just sitting there drooling. His name might be an image he tries to spread about him, or it might be an actually earned nickname.

In a bar he doesn’t often pay for drinks, but snatches them from the hands of passerbys with his whip instead. If they complain or want to brawl, which is what he expects, he intimidates them using his crotch gun, while staring with a wry smile in his face.

In combat situations he uses lots of exclamations, such as ’What the fuck ?‘ or ’Oh, shit !‘.

Go for the testosterone

The personality behind his “sexy” façade is that of a cooperative, cool and nice guy. His voice is quite soft, and when he’s intimidating someone he doesn’t speak. Depending on the company he could be either ultra-macho or a nice guy.

His true personality is probably a mixture of a womanizer, controlled drinker, sex maniac, adventurer, likeable guy, tough guy and cool guy. Although not too bright, he has a real knack for occult philosophy.

He’s an excellent team player, although he did hide the fact that he was turning into a vampire, despite the fact that it was a definitely lethal threat to his temporary teammates. The crotch gun is quite telling also, as is the whip (also belonging to adventurous guys like Indiana Jones), to what sort of things he likes.

“Sex Machine. Pleased to meet you.”

Sex Machine, although capable, is a relatively small fry adventurer. He could easily be inserted into the worst bars in a slum, and it’s even possible that he would enjoy the company of other hard drinkers in the DC Universe, such as Lobo.

Source of Character: From Dusk till Dawn-movie, character played by Tom Savini. 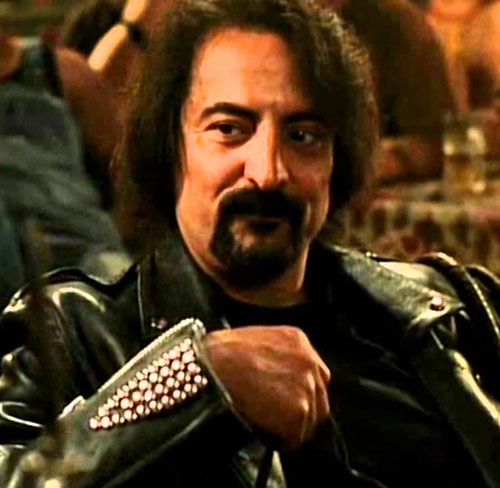