The Front Page had decent fighting ability for a street thug. But not enough to keep from being easily defeated by stuntman Buddy Baker. This is even though Baker did not use his Animal Man powers in their brief brawl.

A bar fight ensued. Animal Man, who was suffering from fits of atavistic rage due to a mental disorder at the time, crushed the Front Page’s skull with the Page’s own weapon.

The print on the Front Page’s body naming Animal Man as his killer remained after his death. So Nowhere Man and Animal Man tattooed over the print before dumping the body outside a hospital.

The Front Page looks like a mummy wrapped in strips of newsprint with shifting headlines instead of cloth. The headlines constantly change to reflect the Front Page’s thoughts and his current circumstances.

He speaks in the same “headline” style as the messages that appear on his skin and weapons.

The Front Page sometimes wears a trenchcoat and fedora when he’s trying to go unnoticed in public.

The Front Page is a typical thug. Like a lot of half-way bright brutes he tried finding a socially-acceptable outlet for his thuggery, in his case by playing at being a superhero.

“No mercy for ex-circus freak doublecrosser ! He broke our hearts when he stole our cash says onetime best friend.” 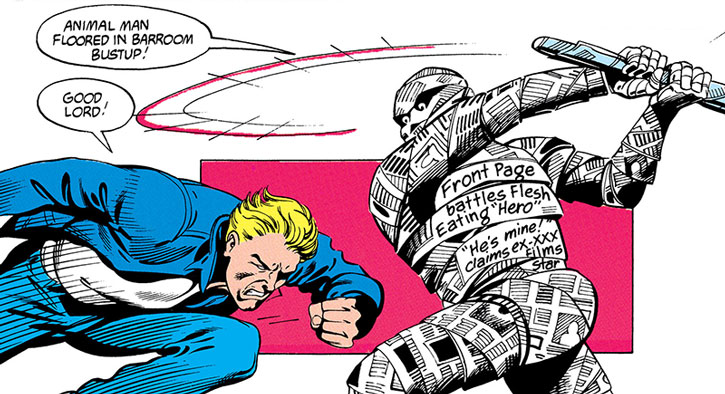 The following are some of the headlines that appeared on the Front Page’s body during the fight with Nowhere Man and Animal Man:

“Nowhere Man gets it ! Painful death for double-crossing freak !”

This sordid loser could be encountered singly as a low-level street thug. Or as the henchman of any number of organized crime figures that like highly visible enforcers.

Equipment:
Heavy Metal Newspaper [BODY 08, Enhance (EV): 01 (cap is 07), Descriptor: Slashing, bludgeoning].
This melee weapon looked like a rolled-up newspaper and was said to be “capable of decapitating a man at 20 paces” when thrown by the Front Page. It could also elongate slightly and extend a small axe blade for use in close combat.
The newspaper had the same trait that the Front Page’s skin did ; when the Front Page tossed it through a window at Nowhere Man, the headline “Nowhere Man butchered in revenge slaying! Stole pals’ loot.” was clearly visible upon it.

The Front Page had a Low Connection to Nowhere Man until Nowhere Man stole the money from their films. 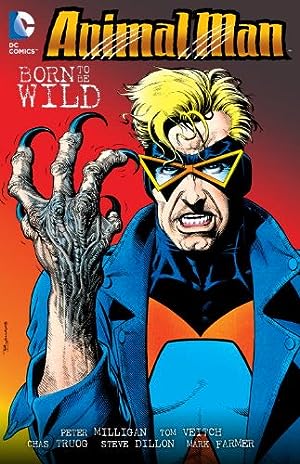 Animal Man: Born to be Wild 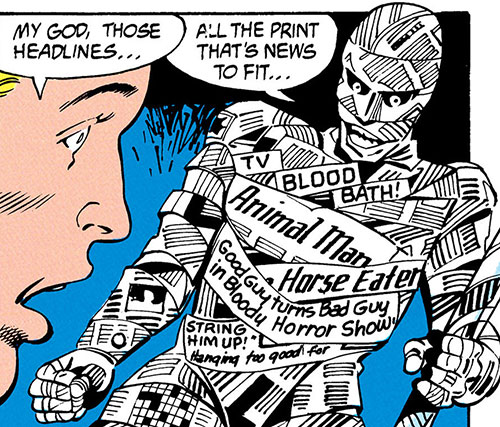 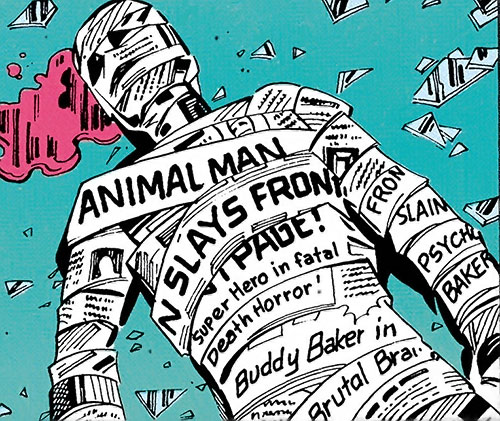