DV8 (pronounced “deviants”) was a 1995 Image Comics series about edgy super-powered kids. Self-centred and self-indulgent, their lives are controlled by a murderous intelligence conspiracy managed by one Ivana Baiul.

Though the book’s sales made returns of the characters difficult to obtain, the existing fan base seems to have been quite dedicated.

Frostbite is a Gen-Active. He was given the synthetic Gen-Factor compound that Ivana designed to give powers to her Guinea pigs.

He can absorb ambient heat or cold, to release it as a blast of fire or ice. Even if exposed to intense bursts of cold or heat, he can absorb it and store it for later use. The ambient heat/cold is usually enough to effortlessly allow him to send small fire or cold blasts.

Before joining I.O., he was a brilliant football tight end , promised to a pro career if he could afford college.

Frostbite was recruited by I.O.’s Project: Genesis like his team-mates and Gen13. While attending college, his lack of academic results prevented him from getting a scholarship. But a government agent, sent by I.O., offered the desperate Carver to join a special training program with full funding.

While attending the training, he was fed activator drugs designed from synthetic Gen-Factor. He started having nightmares and fevers. He woke up with his hair blond instead of its usual brown. The fever was getting stronger and stronger, and he started to glow. That’s when he finally decided to see the medical staff. They put him in a cryogenic pod.

Though he constantly doubted I.O.’s and Ivana’s motivations, he followed orders. Leon also tried as best as he could to keep the team together, knowing that I.O. wouldn’t hurt them while they stayed at their feet.

When Threshold deserted, Ivana put Frostbite in charge of the team. The only alternative would have been Sublime.

Large and in charge… no more

During a sabotage mission against a chemical warfare facility, Leon got contaminated by Anthrax’s venom. Though medical treatment saved him from the infection, it rendered him powerless. Being of no more use to Ivana, she sent him away.

Frostbite did not know that no one leaves I.O., and particularly Ivana’s vicinity, so easily. He got contacted immediately by Colby and Santini, both faithful I.O. executives who wanted the Ivana threat eliminated. They saw in Frostbite the opportunity to get leverage to use against her.

They knew she would try to kill him sooner rather than later. So they made him disappear, replacing him with a perfect fake. The fake got killed in a car “accident” organized by Sideways Bob.

The I.O. dissidents then secretly organized a team of apparently dead agents. Frostbite was only the second, the first being the long thought dead Stephan Calahan – Bliss’, Threshold’s and Rainmaker’s father. Soon, they were joined by Sublime. She had escaped I.O.’s surveillance to investigate on her teammate’s untimely “death”.

Unfortunately, the DV8 series stopped before we see the outcome of this plot.

Frostbite is a tall, strong Black man. His blond hair is braided in dreadlocks. He has a goatee. He usually fights bare chested, showing a large “BITE” tattoo on his chest. He wears two earrings on each ear.

When his powers start manifesting, he decided to shave his now-blond hair out of shame. He stopped halfway. As the other DV8, I.O. tattooed him his experiment number (43) on the right side of his half-shaved head.

He’s a good team player. He knows that as long as the team stays together, everybody will be OK.

When he left and joined the dissidents, his most fearful thoughts went for the ones he left behind.

Well basically they’re a bunch of freaks, thugs and psychopaths (sorry, anti-heroes) so I suppose they’d be dandy as the new group from Mento, after he lost control of the Hybrid. That would make them foes of the Titans, which is quite fitting IMHO. 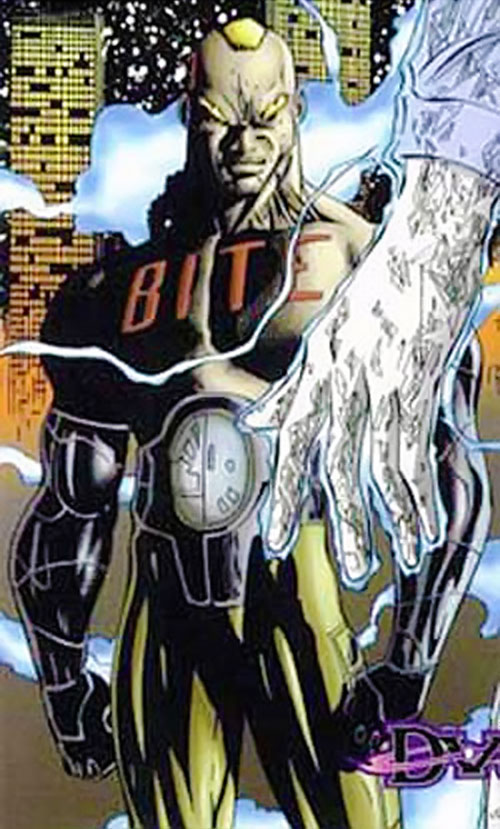