Funky Flashman has no superhuman powers. However, he is a master con artist who hyperbolically refers to himself as “the Salesman Supreme” and “the world’s most magnificent entrepreneur”. He is truly a marvel at persuading his listeners through fast talking and flamboyant hype.

Funky Flashman is a poor hand-to-hand combatant. He prefers to talk his way out of fighting. He steadfastly refuses to kill any opponent.

Funky Flashman was once a business associate of the late Colonel Mockingbird (no relation). After Mockingbird’s demise, Flashman continued to live on the Colonel’s decaying estate. He was provided with ever decreasing sums of money by a cash dispensing machine connected to a bust of the colonel.

Seeking new sources of income, Flashman offered to manage Mister Miracle in a tour of his escape artist act. Mister Miracle realized that he was a charlatan, yet accepted the offer. Mister Miracle hoped that through the tour he and Big Barda could escape the forces of Apokolips who were hunting them.

Promised you a Miracle

However, Flashman stole Miracle’s Mother Box, a so-called living computer, and brought it to his estate. Tracking the Mother Box’s signals, the Female Furies from Apokolips arrived at the estate an attacked. Flashman fled as the Furies destroyed the estate.

Sometimes later, Flashman claims he turned up at something he calls the Sinister Citadel of the Secret Society of Super-Villains. He offered his services as a PR man. No trace has ever been found about this aptly named Secret Society. Yet this myth has been used by Flashman in numerous grifts, many of those involving super-villains.

When confronted by an angry victim, Funky Flashman generally claims that he’s been evicted from the Society by Gorilla Grodd. This is an almost unverifiable claim.

Compiled by Sébastien Andrivet (stats from 2nd Edition, history from Who’s Who). 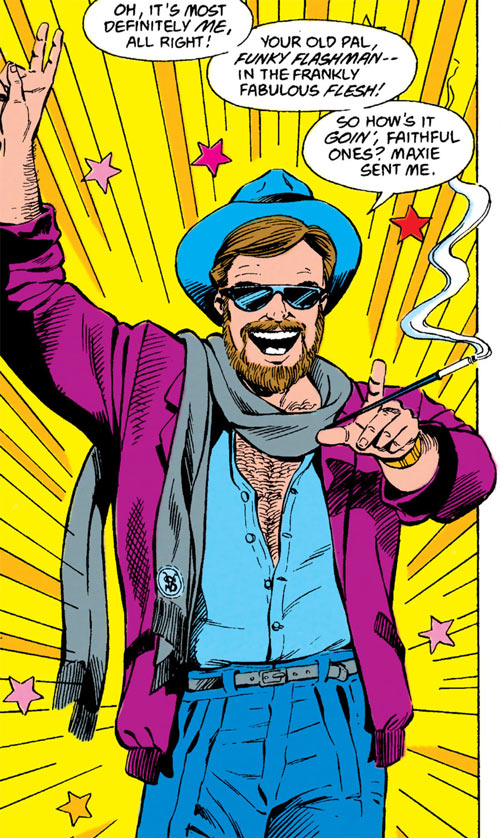