His mother Angel Face possesses similar qualities, making her a greater threat than her apparent abilities suggest. So there might be something going on here.

Funny Face is highly athletic, a capable acrobat, relatively charismatic, and surprisingly well-connected in New York City. He seems to be a solid hand-to-hand fighter, but he chiefly relies on gadgets. He apparently built them himself, and also appears to have demolition skills.

His main weapon is a jester-head-on-a-stick called Bunky. It is quite powerful and precise. The main attack modes are :

Note that this is a full list of everything he ever employed. He cannot actually carry all of this at once, or arm Bunky with everything at once.

Funny Face appeared relatively early during the career of Spider-Girl (May “Mayday” Parker) though he apparently had already fought Darkdevil several times. During one such fight, Funny Face and Darkdevil ended up in a gym at Parker’s high school, where a dance was taking place.

Funny Face decided to kill everyone therein but Spider-Girl, Darkdevil and the Buzz forced him to flee. 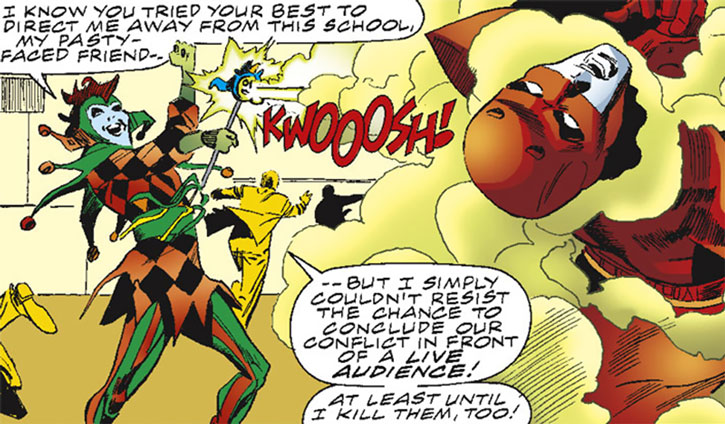 A few weeks later, Funny Face assembled a team, the Savage Six, to seek revenge against Spider-Girl. All members (Raptor, Sabreclaw, Mister Abnormal, Killerwatt, Dragon King) had been previously defeated by Spider-Girl, and Funny Face sent them as a gauntlet to wear Spider-Girl down and defeat her himself.

To his dismay, his big brother Crazy Eight came to oversee and criticize his plans in front of everyone.

But the plot worked. Spider-Girl exhausted herself and even lost her powers before she could reach Funny Face himself. However, other heroes were looking for two hostages whom Funny Face had kidnapped and both the Avengers and the Fantastic Five came in, easily capturing Funny Face. Spider-Girl eventually regained her powers.

Months later, Funny Face was freed from prison by Canis, an up-and-coming crime lord looking to replace the Kingpin (Wilson Fisk) and looking for enforcers. The first hit against Spider-Girl failed. Funny Face and Canis’ gunmen also ran into Spider-Man (Gerry Drew) and Spider-Girl had been improving her skills.

Nevertheless, Funny Face remained at the forefront of the escalating Kingpin vs. Canis gang war. Another attempt at killing Spider-Man (Drew) failed due to Spider-Girl’s intervention, but Funny Face fled with a getaway boat. 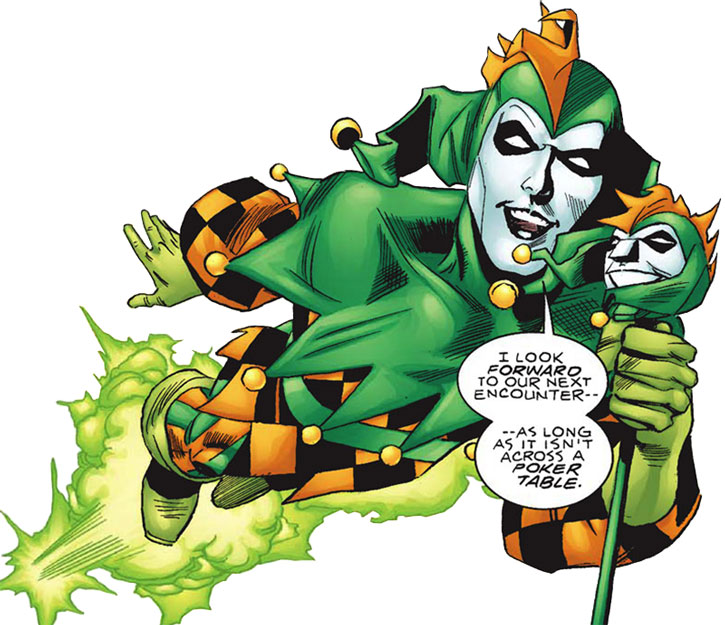 Funny Face soon realised that another person had intervened to foil him during this fight – Crazy Eight. He confronted his brother, and learned that Crazy Eight was indeed working for the Kingpin. They nearly came to blows, as Crazy Eight couldn’t convince Funny Face to drop out of the gang war.

Crazy Eight twice fought along with his brother (against Spider-Girl and the Green Goblin (Phil Urich), then against the Goblin solo). But Funny Face still refused to let go of his deal with Canis.

These dealings led the Kingpin’s main hitman, Mister Nobody, to assume that Crazy Eight was about to defect to Canis to avoid fighting his brother. He attacked, and due to Spider-Girl’s last-second intervention Mister Nobody shot Crazy Eight dead instead of Spider-Man (Drew).

The distraught Funny Face blamed Spider-Girl for this, and angrily left Canis’ employ. He stormed the Ravencroft sanitarium and freed his mother, the deadly Angel Face. Angel Face and Funny Face rampaged throughout the New York City underworld, looking to find and kill Mister Nobody and Spider-Girl.

These raids made normal activity impossible, and resulted both in a brief alliance between the Kingpin and Canis – and in Spider-Girl assembling a new version of the New Warriors. 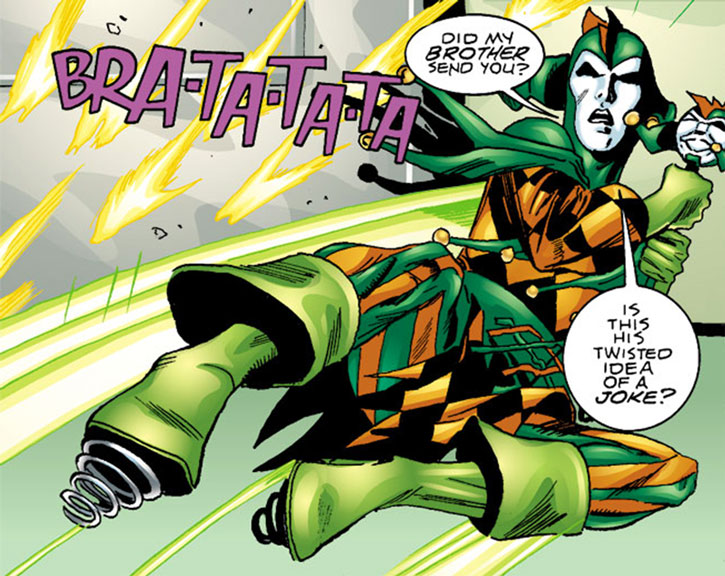 Most Warriors were defeated by the Faces, but Spider-Girl gained the upper hand against Angel Face. The Faces agreed to the deal Spider-Girl offered — to leave New York City and abandon violence — as Angel Face didn’t want to risk Funny Face’s life in the worsening gang war.

The Warriors disagreed with the deal, and expelled Spider-Girl from their ranks.

The Faces simply moved to the West Coast and resumed their violent criminal activities, as the other Warriors had anticipated. They even hit a bank in Ohio on their way. However, Angel Face soon decided that she wanted to kill Spider-Girl after all, and the Faces doubled back.

The Faces ran into Spider-Man (Peter Parker) and would have probably been vanquished in short order. But Parker’s leg prosthesis bugged, allowing Funny Face to capture him. The furious Spider-Girl rushed in and mauled the Faces with her full strength. She took down Funny Face, and though Angel Face fled she was taken out by the Green Goblin (Phil Urich).

Months later, Funny Face escaped during a prison transfer. Though the police assumed he would go free his mother, Spider-Girl correctly deduced that he would first go free his puppet Bunky from the police evidence locker.

Though Funny Face fought hard, Spider-Girl dominated the fight and vanquished him by using his fixation on his puppet. Funny Face hasn’t been seen since.

Funny Face is the merry psychokiller type. However, heroes normally arrive in time to prevent him from killing (it’s not a darrrrkkkk book). For instance, the State couldn’t make its legal case for the accusations of murder against him. He rants like a jester or stand-up comedian, though his repartee has a slightly tired and forced quality to it.

Funny Face mostly acts like an agent of chaos and, secondarily, death. He appears to be irredeemable. He’s ambitious, and wants to establish himself as a big menace – and to make lots of money in so doing.

As with Crazy Eight, his mother is very important to him. On the other hand, he’s tired of always being treated like the kid brother. His relationship with his family, and particularly his older brother, are childish.

Funny Face’s closest friend is his jester’s stick Bunky. He talks to it as a trusted accomplice, and seems to occasionally hear Bunky talking. Though at first it seems like an affectation to look crazy, it’s genuine.

Funny Face will protect Bunky as best as he can. For instance if somebody grasps Bunky he will refuse to let go even if he knows that his stick is used as a tactic against him. He once did what he could to free Bunky from a webbing cocoon as he was afraid the inanimate object would suffocate.

Funny Face apparently has come up with a personality and life story for his puppet. He once stated that Bunky was claustrophobic because “his” mother used to tie him up and lock him up in the closet. It is possible that Funny Face is crazy enough to have transferred memories of mistreatment at the hands of his mother on his puppet, or maybe he just made it up.

“What’s the big deal, hon ? It wouldn’t be permanent or anything. Costumed heroes like you always return from the dead.”

“Are you trying to insult me, bug eyes ? Only amateurs take prisoners. I’m strictly a total war type of guy.”

(Retreating) “I’d love to continue this enchanted evening… but I… I think my mother’s calling. Ta-ta for now — and pencil me in for a reunion bout !”

“Bunky and I prefer to keep our fights fresh and innovative !”

“You have a nasty tongue on you, boy. Mind if I rip it out and keep it for a souvenir ?”

Mobster: “This joint’s protected by the Kingpin !”
Funny Face (with mock concern): “The Kingpin —? Oh, dear ! What do you think, Bunky ? Do we dare risk the wrath of an elderly fat man who’s locked behind bars ?”

(As Spider-Man crashes in) “Ahhh… I see the entertainment has finally arrived.”

(As he fights Spider-Man (Drew)) “Kid, I hope you have a major credit card — ’cause that’s the only way you’ll ever take me out.”

“Cool pyrotechnics, uh ? Bunky and I spent hours perfecting them.”

“Bunky is my best friend ! He doesn’t judge or belittle me. He just accepts me for who and what I am.”

Advantages
Headquarters (variable), Iron Nerves, Scholar (Weapons that can be built into Bunky). 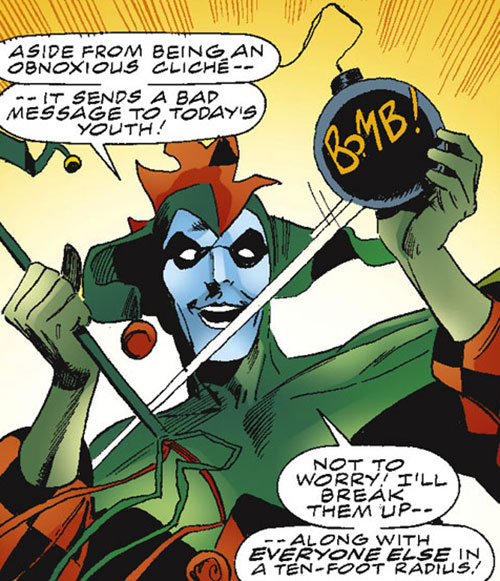 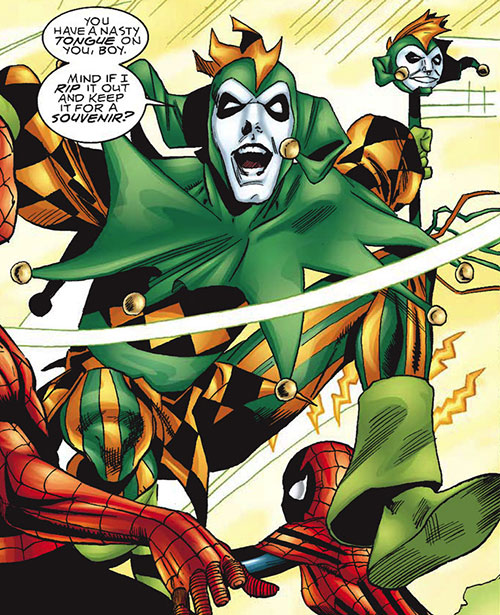 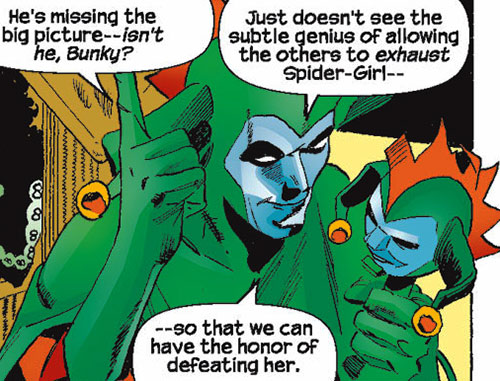