The never-published second half of the arc would have made the 1963 continuity the past of the Image, errr, protoverse (I think it was before Wildstorm clearly appeared).

The Fury is an incredibly gifted acrobat. He also is a superlative hand-to-hand combatant, relying chiefly on his agility and speed.

His unique weapons are a pair of metallic disks. Those normally are held on his forearms on magnetic bands like a pair of small shields, and can be used to block attacks. But they can also be detached and flung as an efficient weapon. The Fury can ricochet his disks it much like Daredevil’s billy club in the days of yore.

However, the career of the Fighting Fury ended in tragedy. He was gunned down by his foe the sinister Squid while trying to protect his son, and died in Fireball’s arms. His last words were to make Richard swear he would continue to fight criminals and bring them to justice.

No one escapes the Fury !

It is likely after his death that Richard’s aged mother learned her husband was the Fighting Fury. I’d imagine the shock from that revelation is what made her health so frail, to Aunt May levels. Since he could not continue his crusade as either Fireball or the new Fighting Fury, Richard designed a completely different costume.

He continued being a super-hero as the Fury, a plausibly coincidental monicker. Soon, the criminals and crooks of New York City learned that… no one escapes the Fury !

Unlike major heroes such as U.S.A., he has no superhuman powers. Yet the Fury staunchly foils and apprehend criminals. He collaborates with such fearless law enforcers as Commander Sky Solo of L.A.S.E.R.. Ms. Solo who seems to be the Jean Dewolff to the Fury’s Spider-Man.

The Fury seems to be about 15 or 16. But he’s intensively trained from birth. Thus his superb physique, confident manner, super-hero banter and full-coverage costume give the impression he’s about ten years older.

But when the mask is off, he’s very clearly a nerdy teenager. He even looks much less athletic.

The Fury is the 1960s Spider-Man analogue with a small dash of Daredevil. He’s a mild-mannered, nerdy student who becomes a highly acrobatic and constantly wise-cracking super-hero because of his sense of responsibility. In his case, said duty is toward honouring the legacy and sacrifice of his father.

He even has his own Aunt May (his aged mother), who would likely died of shock if she learned her young son is the Fury. In fact, he cannot even claim to be the successor of his father, since his mother would then instantly realise the truth. Therefore, he pretends that the “Fury” name is just a coincidence.

As a hero the Fury is driven, courageous and resourceful. No one escapes the Fury ! Or his constant, mile-a-minute stream of banter, for that matter.

Being a young, early 1960’s well-behaved idealist, he greatly trusts the authorities, scientists and the like.

Thug with laser rifle: “Y-you ain’t human !!!”
Fury: “Oh, now that isn’t nice ! Just because you can’t aim that overgrown flashlight properly, there’s no need to go insulting me ! Y‘know, if there’s one thing I hate, it’s a name caller !! Especially a slope-browed, knuckle-dragging, garbage-brained name caller like you !”

“Haven’t you read my press notices ? I’m a nice guy ! Everybody says so ! I’ve never killed anybody !”

“Hey gorgeous, I caught your act ! Believe me, one day you are gonna be big ! Here, lemme show you a trick of my own — now you see me, now you don’t !!” (jumps on top of a giant mutant dinosaur’s head, jams a handful of dirt in each of its eyes)

“Omigosh ! Mom !!! I almost forgot ! I promised I’d call her during recess and it’s almost one-thirty ! Gee, I sure hope I’m not in trouble or anything !”

(After the mandatory flashback to the death of the Fighting Fury) “Oh dad, how could I forget my promise to you ? You gave your life for me, and in return I gave my life to your cause… the cause of justice ! Forgive me, dad… and thanks for helping me ! Now I know what I’ve got to do, and who I’ve got to do it to !” (jumps back into the fray)

(After jamming a bazooka into the maw of a giant dinosaur) “Incidentally, that’s quite a breath problem you have there !! And talk about tense and hostile ! I guess we’re at home to Mr. Coffee Nerves this morning, huh ? Well, don’t worry, I’ve got the very thing right here !! Trust me. I’m a doctor.” (lobs a large amount of tranqs into the dinosaur’s gullet) 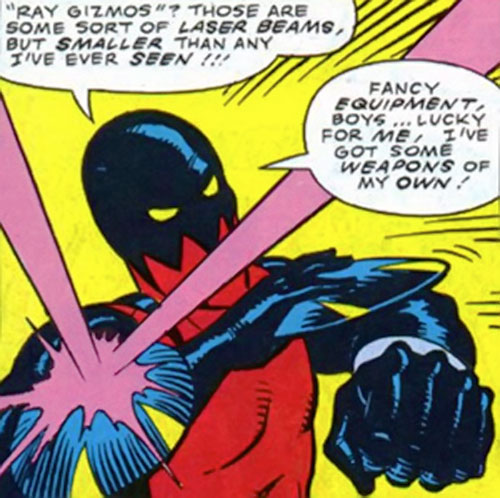 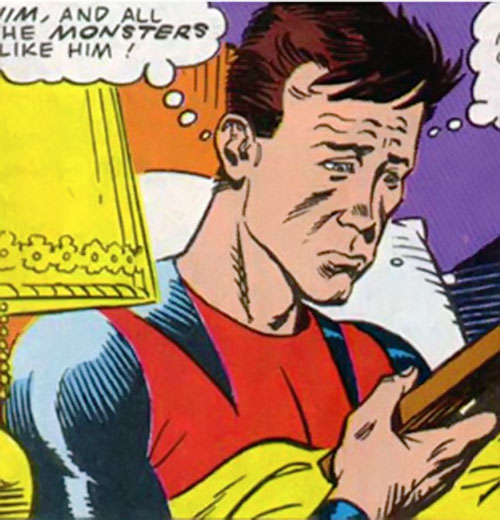