Fusion can force an object or being to turn into another matter that the object or being is in contact with. For instance he can turn someone touching granite into granite.

His modus operandi is to thrown small pieces of material at his target. He can charge those pieces with his power as long as he throws them personally. Thus, throwing a marble at someone would turn the target into glass if Fusion hits. And, no, I don’t understand why he does not carry a full bag of marbles or other projectiles.

His targets, if alive, remain suspended and turned into the matter that hit them for up to one hour. After that, they return to their normal state. While unconscious, they have the durability of whatever matter hit them.

The Bloodpool project wasn’t the finest moment of the US government’s special projects involving superhumans.

About 20 nu-gene active teens were recruited from their families, prodded, tested, operated on, genetically and cybernetically enhanced, and subjected to a dangerous and gruelling training. The promise was that they could one day join the prestigious Youngblood action team, a powerful combat force and media tool for the government. 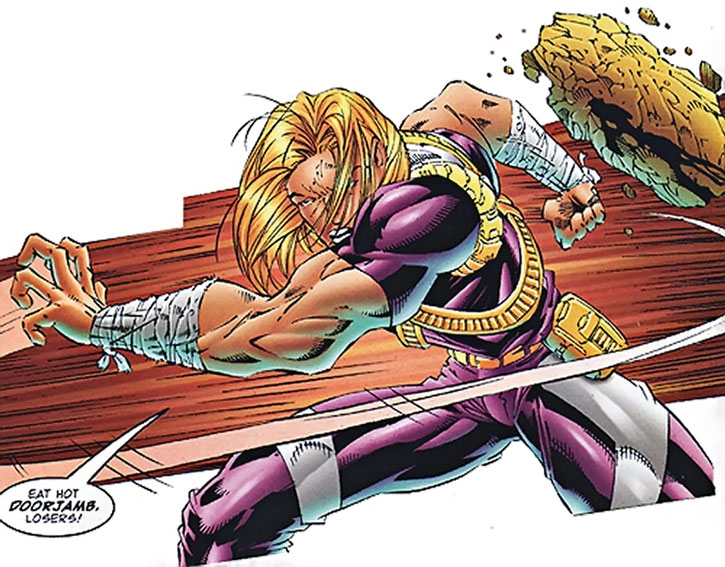 However, there was a crisis in the Youngblood organization when director Graves was discovered to be a demon. During the upheaval, the new director, Battlestone, decided to forego the Bloodpool contracts. Despite all the promises and all they had been through, the Bloodpool subjects were downsized.

A few of them (Task, Psilence, Wylder, Fusion, Rubble, Seoul) chose to follow the advice of one of Seoul’s spirit guide and, with the support of former Youngblood leader Shaft, struck on their own as a private, hero-for-hire outfit. An early, lucky meeting with a millionaire in an unfortunate situation bankrolled them, and the group, which carries on the Bloodpool name, soldiers on.

Fusion is the most reserved and least bloodthirsty member of Bloodpool. This may account for much of his friendship for Wylder. He seems slightly fascinated by Wylder’s ferocity.

Think of him as a nice, reasonable, friendly young man from a wealthy background.

The Bloodpool might stay a failed government attempt at a super-group. Perhaps a Task Force X remnant that Amanda Waller killed in order to make more space for her pet Suicide Squad.