*This* Fusion is the Soviet agent who fought DC Comics’ Outsiders in 1987.

There’s little material about him. But I can see how he could be handy to have in a story.

Fusion is composed of three men. They can operate independently, or form the Fusion gestaltIn this context, several persons fusing to form a new entity.

Each man has his own powers :

Simple physical contact between all three forms the gestalt. Even if they do not want it to. It’s a chain – #1 and #3 can simply hold #2’s hands and it will work. Even though #1 and #3 aren’t touching.

The Fusion form doesn’t exactly have their combined powers. But it’s the general idea : 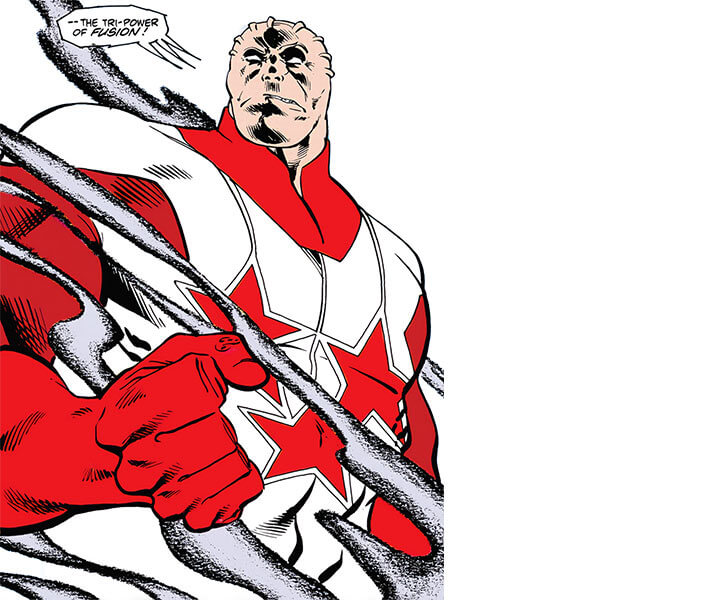 During the mid-1980s, Soviet scientists learned much from the captured Force of July super-team. They went on to engineer a number of superhumans.

The main project resulted in the People’s Heroes, a super-team serving the State.

But there was at least one side project. It resulted in three more agents capable of forming Fusion.

However, this gestalt process gradually damaged these men’s minds. They became uncontrollable. In particular, they bitterly opposed the policies of General Secretary Gorbachev  .

Fusion’s last operation for the State was to free the People’s Heroes from Mozambia. They had been imprisoned there after an anti-Soviet coup.

Fusion then went AWOLAbsent without a leave. A military deserter. He linked up with an American terrorist movement.

The plan was to attack Liberty Island during the centennial of the statue. Then blow everything up and kill President Reagan  .

(In the 1980s Outsiders books, throwing an old shoe without hitting some American domestic terror organisation would have been a challenge.)

The People’s Heroes were sent in to collaborate with the Force of July to stop the attack. The Outsiders also helped. Three teams were too much for Fusion and his allies.

He still was determined to kill the President, and made his way to Camp David  .

However, Batman and the Outsiders responded.

Fusion killed a number of servicemen and made his way to Mr. Reagan. But the President was actually a disguised Batman.

The Outsiders had a hard time making headways against the powerful Fusion. But the Soviet was seemingly killed when an otherwise empty Air Force One  crashed into a mountain. 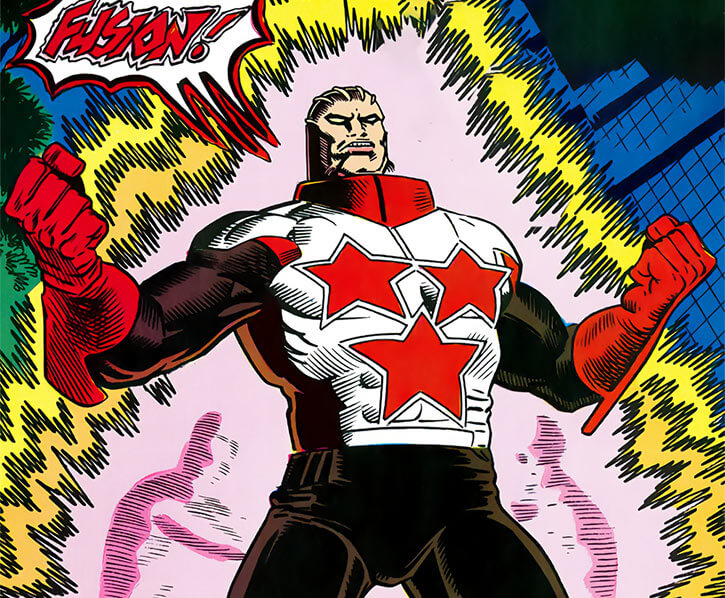 The gestalt form speaks in all three voices at once. Can your gamemaster do that ?

They are obsessed with America being the enemy, and any appeasement being treason.

They only refer to each other using a number. Allegedly to deemphasize their individuality and ego, to serve their collective goals.

They tend to address each other as “brother”, and other Soviets as “comrade”.

MPR (If the three men are slammed into each other, Fusion will form then immediately receive a 13/13 Bashing Combat attack against his BODY/BODY).

Many of the stats are speculative – too little material. Amusingly, #1 doesn’t even clearly demonstrate his superspeed.

Fusion has both Jumping and Flight. We’re not using a character creation budget so the redundancy between the two is immaterial. And this may become important when facing a Neutralise, Drain or the like.