“Our world is doomed to destruction ! The amazing scientific knowledge of the far distant future is brought back to the present day by a maddened, all-powerful creature, who would claim our world for his own ! With our civilisation at the very edge of disaster and chaos, the ALL WINNERS SQUAD joins forces to combat this horrifying, dreadful…. MENACE FROM THE FUTURE WORLD !”

Future Man is an obscure demobilisation-era character, whose main appearance was in 1946 in All-Winners Comics.

But the All-Winners era seemed intriguing back in 1974, when Roy Thomas  had Whizzer narrate some of these adventures in Giant-Size Avengers.

After reading this entry, you can read the Madame Death character profile, which continues the story and discusses stuff.

Future Man is a great scientist and engineer, mastering science from the far future. He can quickly build super-advanced weapons and vehicles. Such assets included :

The ship also had a time radio, capable of communicating with the far future. However, this was a difficult operation requiring hours of calibration.

Future Man also knew where to position a modest amount of explosives under the Pacific to trigger cataclysmic tidal waves. One suspects he knew about this because this was done in his future, and was an important move in wrecking the Earth’s oceans.

At one point, Future Man gestures up and rains come pouring. However, the cloud he pointed at was a cover for his ship. So it’s likely not weather control. One hypothesis is that the camouflage cloud naturally accrues water vapour from the atmosphere, and the ship has a minor system to precipitate it.

The Future Man comes from a distant future – reportedly the year one million, A.D.. His Earth has been wrecked by ruthlessly stupid exploitation, and is barely habitable. The oceans have dried up, and the cities have been abandoned. The population thus seems small.

A VIP decided to send an agent into the XXth century, to seize the Earth of the past and move there. The objective was to eradicate the vast majority of the XXth century population, perhaps keep some as slaves. And then presumably proceed to wreck this Earth as well.

The man dubbed “the Future Man” was this agent. Being a leading scientist, he seemed unconcerned by any effects of tampering with the past. Presumably, this civilisation had established that travelling in the past in the Marvel Universe normally takes you to an alternate timeline .

(It is possible to travel back to one’s actual, one-of-a-kind past. But this is considerably more difficult, and alterations damage reality as they accumulate.)

And it is possible that the Future Man was aware that he was travelling to *a* past, not *the* past, and there likely would be variance from records.

The Future Man was first spotted in the US, in 1946. He allied with well-connected, ruthless mobster Madame Death. She would be his sherpa in this distant past, and was promised vast loot once the extermination was over.

However, Captain America was after Madame Death. He thus overheard about the Future Man’s plan. Madame Death and Future Man escaped from Cap and Bucky, but the heroes mobilised the rest of the All-Winners Squad.

(In the 1946 story, Cap and Bucky are meant to be Steve Rogers and James Buchanan. Later on, they are retconned  as having been Jeffrey Mace and Fred Davis. We’ll discuss this in the Madame Death profile. Fret not, ye True Believers !)

The All-Winners all conveniently stumbled upon the plots of FM and MD :

(“The team’s heroes stop threats individually, then unite for the final showdown” was a common format of the 1940s. For instance, it was how the JSA usually worked. This presumably was an evolution over the short features anthology format.)

The All-Winners deduced that the Future Man’s ship was camouflaged within a black cloud. Moving fast, they intercepted it as Future Man had confidently remained over the scene of his previous attempt.

The Future Man held back the entire team with a force wall, then escaped along with Madame Death. However, Cap had sabotaged his ship, preventing him from returning to his distant future. The pair thus plunged uncontrollably into the past.

The Future Man eventually managed to fix the ship by hand and without resources. However, they were far into prehistory, and the Future Man’s immunization program hadn’t included shots for such ancient diseases. He thus succumbed to sickness not long after completing the repairs.

Howbeit, Madame Death attempted to avenge him. See her profile for more.

Obviously, people from the year 1,000,000 speak 1940s US English. It wasn’t even a mental power thing – the systems in his ship were all labelled in English.

Future Man is an overconfident, cruel and casual killer. ”Primitives” are nothing to him, except for a handful who make for convenient allies. He’s certain of his superiority.

I’m not doing a literal modelling of the Astral Projector. Instead, Future Man activates his Intangibility then boasts that it was his astral form all along, ah ah ah !

Which also models what happened in the story more precisely than an astral projection mechanic à la Spirit Travel would.

If Future Man opts to stop the projection, then in this modelling he uses Teleportation to return to his ship’s astral projector. In-universe he was always physically in his ship, but in practice there’s no difference.

Most of his uses of Mental Blast were done with the benefit of Blindside, particularly against Namor.

He could have Shrinking: 01, Always On, but IMO that’s not the clearest approach.

The Split thing is a literal interpretation. It could be abstracted out or treated as a sort of Superspeed, but a Limited Split is simpler, more interesting and does allow him to work faster. 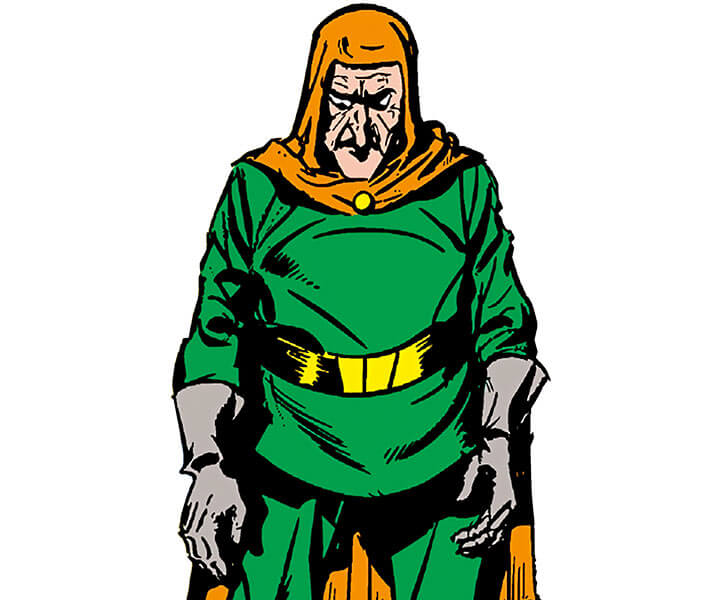