Dr. Metzner is a full professor of psychology, and the author of a dozen technical books on the subject.

His inability to rationalise his workspace, leaving his office to drown under loose papers and books, is also regarded as a super-powers by his secretary.

In his future-man form, he has a baffling array of psionic superpowers. Most manifest as a beam from his forehead. See the game stats for a list.

Barry Metzner has always been fascinated by the mysteries of the human brain. This is what led to his early 1980s tenure at the Lake Shore University as a professor of psychology.

However, in his youth, he used a more iconoclastic approach – he built a machine to upgrade brains so he could understand them better. Of course, he recklessly tested this evolution accelerator on himself. And of course, it turned him “into the form that would be mankind’s a million years henceforth”.

Staggering around in his far-future body, Metzner felt a cold, alien mind slowly overwriting his. He stumbled back in the machine to devolve himself back to his original form before it would be too late. However, a portion of his consciousness remained hyper-evolved. And it wanted control.

Metzner used various means, such as self-suggestion and autohypnosis, to bury that part of himself. Through sheer discipline he succeeded. He then reinforced his conditioning by having a subliminal tape recorder play continually under his pillow.

Veering away from his technological research, Metzner became a psychology maven, then a full professor with an enviable track record at publication. When the new Lake Shore University was built and open, he joined it.

For a time his main problem was finding a secretary that wouldn’t give up when faced by his extraordinary absentmindedness and disorder. Eventually, he hired charming new psych student Linda Danvers, who somehow proved able to keep his papers and books into order.

Fascinated by criminal psychology, Metzner wrote a book exploring the psychology of a billionaire named Burroughs. This man was suspected of innumerable crimes but never actually convicted. Learning about this, the crimelord had Metzner captured by Council agents — his goal being for Metzner to rewrite his books with deliberate errors to fool his competitors.

But Supergirl intervened, and rescued Metzner while thwarting Burroughs.

Power down, power up

One night, however, the power failed throughout Chicago. The tape recorder under Metzner’s pillow, whose existence was erased from his consciousness every morning by the subliminal recording, stopped functioning.

Metzner woke up knowing something was very wrong. He eventually got overwhelmed by his hyper-evolved consciousness, who transformed him into a future man who intended to rule the mere apes surrounding him.

Supergirl fought the future-man hard and long, angering him despite his professions of being above emotion.

When listening to the heartbeat of the creature, she recognised he was Metzner. She had previously memorised his heartbeat to track him down and rescue him. Appealing to Barry Metzner inside the Future-Man, she triggered the terrible anger of the creature. He seemingly blasted her into atoms by pumping the full contingent of Hero Points  behind an Energy Blast.

The notion that he had killed triggered a great conflict between Metzner and the future-man. As a result Metzner eventually inverted the transformation, reverting to his normal form and psyche. Though he was still dressed in the strange and rather embarrassing future-man outfit.

Metzner felt confident he was now in control and would never let the future-man emerge again. He may have been successful, as he hasn’t been seen since, with The Daring New Adventures of Supergirl coming to an end with this very issue.

As Metzner, he is a pipe-smoking absent-minded professor in his late 30s. He lives for science and works constantly at the university on some book and/or experiment.

He has something of a mild crush on Linda. Frex he occasionally tries to please her by ordering his incredible mess – or at least by hiding the mess away. He’s a bit disconnected from reality, but otherwise pretty smart.

The future-man is an incredibly arrogant, fast, analytical machine. It seems obvious to him that he is intrinsically superior and must rule the appalling primitives around him – then maybe make his way back to the future. See his quotes for a good portrayal of his way of thinking.

Although he insists he’s above emotion, appealing to Metzner within him drove him into a blind rage. So I doubt he has, in DC Heroes RPG terms, the Iron Nerves he pretends he has.

“To imagine that one such as yourself might think his assistance sought by *me*… as if you might inquire of the simple ape for aid ! No ! For though we be of distant relation… as you yourself are to the selfsame ape… there is nothing you might do for me, for you are the past — AND I… I AM THE FUTURE !”

“Your attempts to taunt me to anger are worthless, Supergirl ! I am beyond such things ! I know only reason… cold, analytical fact ! I know no anger, Supergirl. Only purpose !”

“Do not think me included in your laws, Supergirl — for I shall henceforth decide upon right and wrong ! I am a law unto myself… and you shall all follow my commands… or suffer for your disobedience !”

Supergirl : “Good Lord ! Don’t you care what happens to these people ?”
Future-Man : “Frankly… no ! For now, I am content merely with studying these specimens. I wish to see what motivates them.”

Skills:
Acrobatics (dodging)*: 07. The future-man presumably has enhanced technological and scientific skills from Metzner’s, but never demonstrated them. 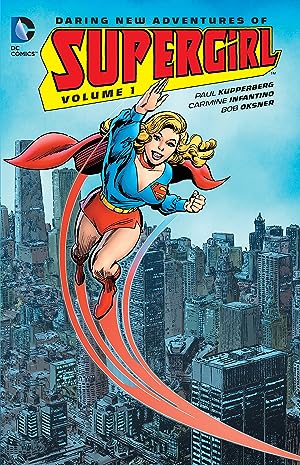 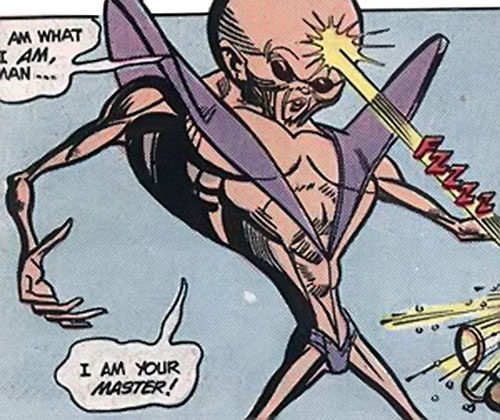 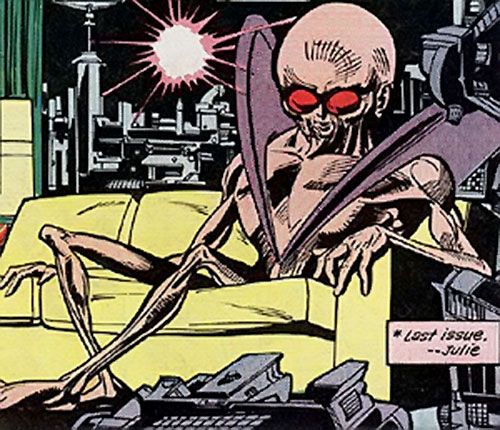 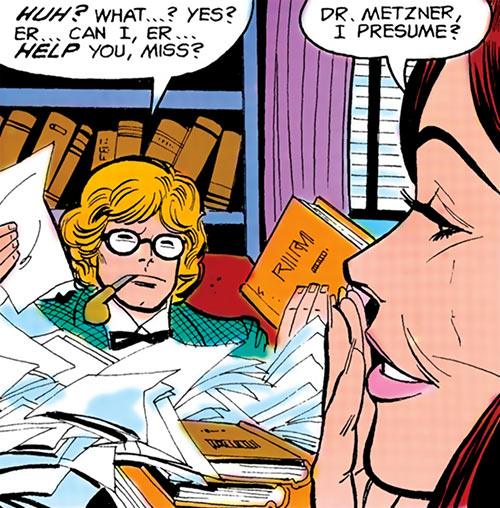