Futurians are, according to their own rants, a subtype of humanity, a race of future masters gifted with ESP. Their reality is apparently “enriched”. They can hear music, taste food, drink drinks which do not exist for normal persons.

The most likely theory is that they have strange telepathic abilities which allow them to perceive and interact with the intent of others. For instance the music a musician intends to play without playing it. Or the food a chef intends to prepare without preparing it.

Futurians say they are mutants – psionically  gifted men and women born ahead of their time, with powers of perception. Five men led by one Michelle are the only example of known Futurians.

(This is the same general idea as John Broome’s Captain Comet (Adam Blake)).

Michelle’s group follows a prophecy. It states that they will locate the seventh Futurian, a fearless leader of great mental power who will lead them to conquest. They have an elaborate protocol of trials to weed out the potentials from the one, true seventh Futurian. Potentials who fails the trial are simply killed.

The six Futurians roamed the world (or possibly just the US). All the while they tested and murdered who seemed to be a possible Seventh Futurian.

One candidate for the title was Stephen Grey. He was a well-known photographer of psychic phenomena. To Futurian eyes, his photographs apparently displayed actual phenomena.

The Futurians met with him and had diner. Musicians played Futurian music (i.e., just miming without instruments) and chefs served Futurian food and drink (i.e., nothing). But once Grey asked what was that madness, it became obvious he wasn’t the Seventh.

Grey’s life was saved by the Batman, who knocked down all present Futurians. Michelle then declared him a candidate for the title of Seventh Futurian. Batman played along, and she crowned him. The crown, however, was trapped. Batman was thus rendered unconscious for the final test, then thrown in the water inside of a sealed coffin.

Batman, of course, escaped and knocked out the Futurians.

When Grey’s wife asked him how he knew they were in danger, Batman had to confess that he had “heard” Grey’s unconscious telepathic cry for help.

See illo for a Michelle shot. The others are white men clad in futuristic clothes. Basically, variants over Legion of Super-Heroes uniforms.

Wild-eyed cultists. Michelle does all the talking, and helps them constantly reaffirm how superior they are to normal humans.

“You cannot prevail against a Futurian !” 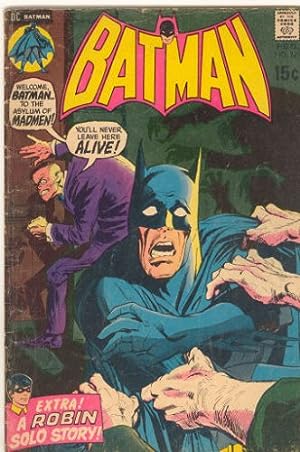