This cosmic gargoyle possesses unbelievable strength and durability. It is more than capable of engaging Superman himself in a slugfest.

It was stated that it was more powerful than Superman. For once this seems not be complete hyperbole, though our DC Heroes RPG stats paint a more nuanced portrayal. For instance the Golem doesn’t have a fraction of the Hero Points  the Man of Steel has.

The Golem seemed entirely able to take on Superman in hand-to-hand combat in terms of alacrity, technique, coordination, etc.. Yet it has nothing resembling Supes’s Super Speed.

Still, given this staggering power, the Golem is basically unstoppable. It has been known to smash down the gate and walls of the Fortress of Solitude without even slowing down. It is able to ignore nearly all forms of assault.

It is so strong that it could leap well past far orbit with a single bound, and it has believably claimed it could swim in the hearts of suns.

Draw down the stars

The Golem is capable of absorbing hyper-stellar force, draining his foes and augmenting itself. This Drain is, as often, fairly complex in game terms. But thankfully it is only relevant against characters who are somehow star-powered, such as Kryptonians under a yellow sun. What the Golem’s upper limits are with this ability is undetermined.

Though the Golem seems to depend on draining star energy to survive, it can will itself into inertia until it is bathed anew in galactic power (in DC Heroes RPG terms, Suspension). Thus, it can survive lengthy periods without ’food‘.

The galaxy-shaped mark on the Golem’s brow can supposedly be struck in such a way as to destroy it. This would be much like erasing the power word etched on the brow of a real golem. However hitting this mark is very hard, due to the visual distortion from the shimmering white energy field surrounding the golem.

As a consequence, the actual affects of striking that mark were never actually tested.

The Galactic Golem is one of the more ambitious creations of Lex Luthor. Just like Superman is powered by the rays of a yellow sun, Luthor wanted to conceive a creature powered by every star in the cosmos.

The genius gathered “particles and pieces of galactic matter” from “the very birthplace of the universe” until he had enough to build a large humanoid statue. He then used a concentrator of “hyper-stellar energy” to suffuse the creature with power and pseudo-life.

Luthor tested his monster by using the concentrator as a cannon. He thus implanted energy into a nearby abandoned building, and then into a mountain outside of Metropolis. In both cases, the golem hungrily destroyed the structure, this tremendous destruction enabling it to unlock the energy to feed off it.

Predictably, Luthor then aimed his concentrator at Superman, invisibly charging the Man of Steel with galactic force. Soon the Galactic Golem attacked Superman during a public event, wanting to pulverise him to feed off the energy Luthor had beamed into his nemesis.

Onslaught against the Man of Steel

The Golem couldn’t be defeated in a straightforward fight, even by Superman. But the Man of Steel noticed that the cosmic gargoyle once reflexively protected the galaxy-shaped feature on its brow from a random flying object. Assuming that it was the key to defeating the Golem, Superman readied his blow. But then, he realised that it might cause a terrible explosion.

Acting at super-speed, Supes used the radiation from the golem to increase his vibration (much like the Flash). He scoured the entire planet, evacuating every living being (save Luthor, who was within an unbreachable force field) to another dimension. This way, they would not be harmed if striking the Golem’s brow resulted in a planet-shattering explosion.

As it turned out, Superman’s punch missed. As a result, he accidentally sent himself to the same dimension as the evacuees. As there were at that point only two persons left on Earth, the Golem came for Luthor. It intended to feed off the energy cannon and kill its creator.

Superman came back and flew to Luthor’s rescue. Thinking fast, the bald megalomaniac pointed his projector at a random meteor swarm in deep space. After a short hesitation, the Golem hurled itself past orbit to pursue this food source.

The Golem thus drifted in deep space along with the meteors. Presumably, it absorbed the charged ones and was left with ordinary rocks, at which point it became inert. The Golem was slowly covered by a thick crust of dust.

Some months later, an alien scout ship spotted it. They brought the vaguely humanoid form aboard. Investigating, they chiselled away the deposits to uncover the golem, accidentally altering some details of its appearance.

As they flew back home, they tried various energy types to see if they could resurrect the creature. To their dismay they eventually were successful. The rampaging monster attacked the energy generators of the lab before bursting out to find more of those.

The aliens eventually came up with the same solution as Luthor. They energised distant meteors so the Golem would jump into space to get to them. As it turned out, those meteors ended up on Earth.

Battle at the Fortress of Solitude

After killing a hapless witness, the Golem emerged from the crater. It started looking for Superman. Presumably, Supes retained some galactic force in his body – or maybe the Golem was just out of revenge. The Golem engaged Superman into combat… then left. Perhaps the monster cunningly assumed that this would force Superman to create an energy source to lure it in.

If so, it worked. Superman reused Luthor’s energy projector, stored at his Fortress of Solitude, to concentrate hyper-stellar power. Soon after that the Golem irrupted on the scene. It easily smashed through the gates and walls of the supposedly impenetrable Fortress.

Due to the disruption, Superman was accidentally hit by some energy from the projector. This put him on a more equal footing with the Golem. Their fight wrecked part of the Fortress, and millions of tons of ice in the surrounding Arctic.

Using his superspeed, Superman bored a channel to the centre of the Earth during the fight. He lured the Golem to walk over it as the magma spurted forth. Though this was of course not enough to affect the Golem, the lava was rich in iron and nickel… and the Golem was standing directly over the North magnetic pole.

Covered in highly magnetic metals, the Golem found itself immobilised and paralysed.

The Golem was never seen again, though its image was once used as an illusion by Superman as part of a deceptive plan. Nor was the Golem or anything like it was ever witnessed in the post-Crisis DC Universe… as of this writing.

At first, the Golem was quite weird-looking, with a grotesque visage and hands-like feet. Presumably, that was a creative moment by Luthor. Paradoxically, it was made more human-looking by space aliens.

Originally, the golem appears to talk in an eerie voice. But that is actually the output of an added-on device, and the voice is that of Luthor with some deformation. From the captions it would seem that it is Luthor speaking through the star-spawned servant and directing its actions. The dialogue does seem to be the usual Luthor threats and declamations.

The Golem eventually rebels, though its sentience seems primitive and is limited by its hunger, which is its only goal. There’s a puzzling panel where it is unclear whether the Golem is simply broadcasting what Luthor is saying, or speaking its own words in Luthor’s voice.

In this early state, Luthor would bestow his Hero Points to the Golem and use them as he saw fit… to destroy Superman ! The Golem later gained its own HPs.

When he returned on Earth, the Golem clearly had a sentience of its own. It was an evil, destructive one-track mind. Perhaps all the energy it absorbed since its creation resulted in sapience, and it would get increasingly smart and sophisticated as it “fed”.

Advantages:
Life Support (Full, except for its need to feed off Hyper-stellar energy), No Vital Areas, Partial Attack Vulnerability (a +4CS to OV Trick Shots aimed at the mark on its forehead, possibly – 6 CS RV. See below for more.). The Golem may have had Prehensile Feet at one point.

Draw down the stars

The Golem is powered by “hyper-stellar energy” (a.k.a. “galactic force”, “galactic power”, etc.). It seems to be a concentrated version of some form of stellar radiation.

It can absorb this energy to feed, including what corresponds in game term to Energy Absorption, since bombarding the Golem with the energy it feeds off of would likely be futile. What counts as being “stellar” is unknown. The Power Cosmic in the Marvel Universe would presumably fit the bill.

The Golem can also Drain such power. As it turned out it could Drain the STR of Superman, since Superman is powered by the stellar radiation of Earth’s yellow sun. It is unclear whether Supes’ other Kryptonian abilities were affected. But it seems likely that other ’raw power‘ abilities involving stellar energy (say, solar blasts) would be Drainable in the same way.

Down the Drain, part 1

Note that these are largely guesses based upon how those things usually work in comic books. The Golem’s specifics might be different, but we have no way of knowing.

Down the Drain, part 2

The Golem doesn’t optimise its use of Power Drain. It’ll open up with one, but will then mostly use its STR, going with Power Drain again about once every third Phases. This was true even with Luthor in control, so there might be a Limitation as to how often Power Drain can be done.

Power Drain normally has a Range of Touch, but the Golem can Combine its Power Drain with a Mental Blast ability. These are white power blasts coming from its hands and similar to the white energy aura surrounding its body. Unless the Golem has very recently fed, these blasts are very weak (a Power Loss Limitation) and operate with zero APs of Power. They have an EV of zero and a Range of zero APs, but that is still notably better than Touch.

However, as soon as any RAP of Power Drain has been scored, they jump up in power. The Golem can engage as many APs as half the AP value of what it’s draining, rounding up. For instance, if Draining Superman’s 25 STR, it could engage 13 APs of Mental Blast (and use up to 13 HPs to boost its Mental Blast AV and/or EV if desired).

Down the Drain, part 3

The active APs of Mental Blast raise at the same rate as the Golem’s STR from Power Draining, the Power Loss Limitation being gradually eased as the Golem feeds. How high it can go is unknown – my guess would be 20 APs.

The Golem prefers hand-to-hand combat, where it can bring its superior STR to bear. But the Mental Blast is very useful to establish the first Power Drain if applicable, and can be very useful against flying opponents.

The Golem may have a Fatal Vulnerability to a lack of absorbed galactic force. How long it can go with getting some, how quickly it weakens, etc. remains unknown.

Source of Character: Pre-Crisis DC Universe circa 1972 (Earth-1, to be specific), written by Len Wein. 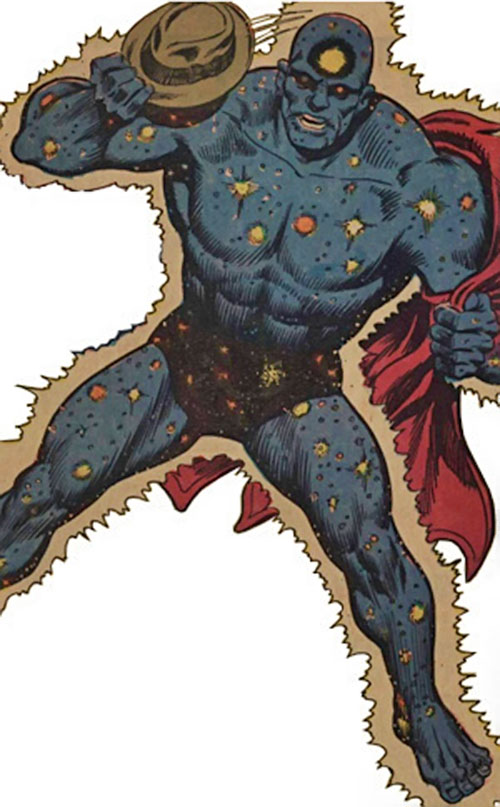 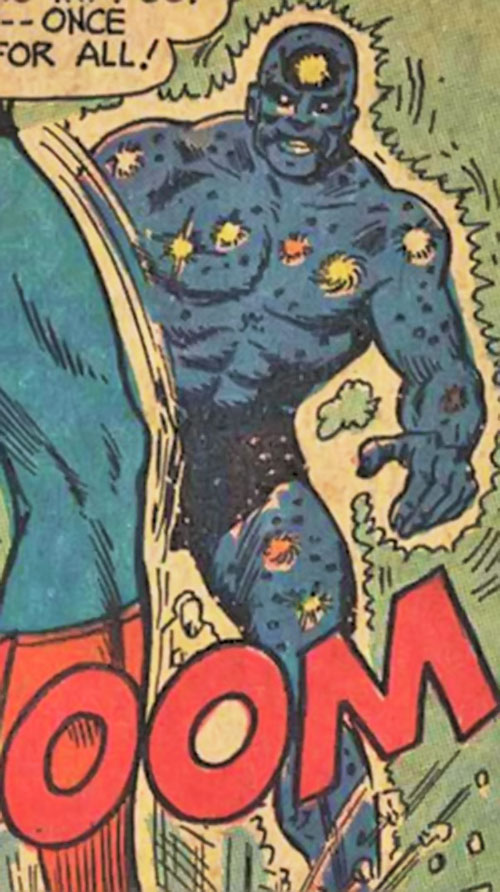 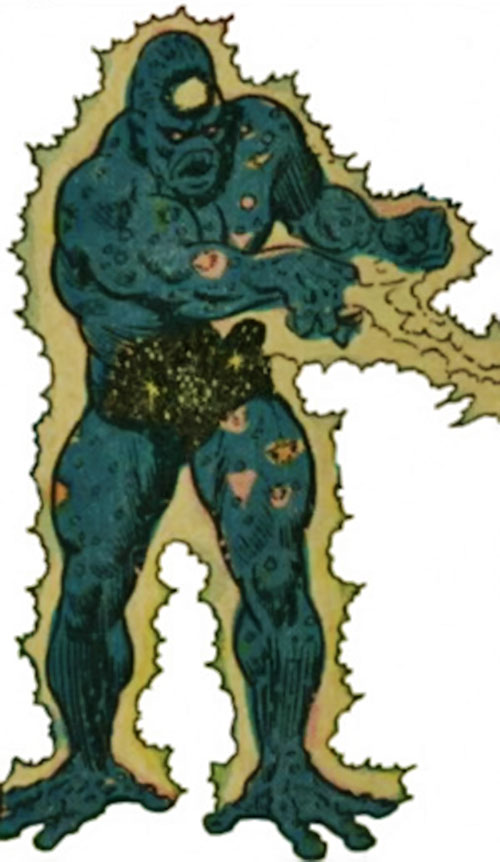 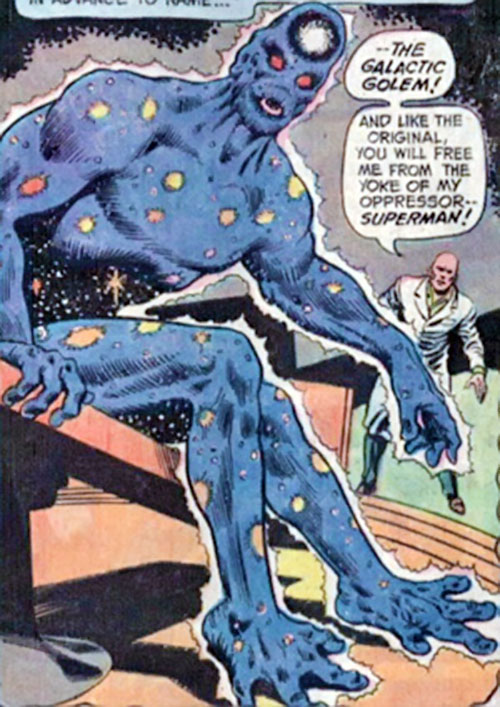 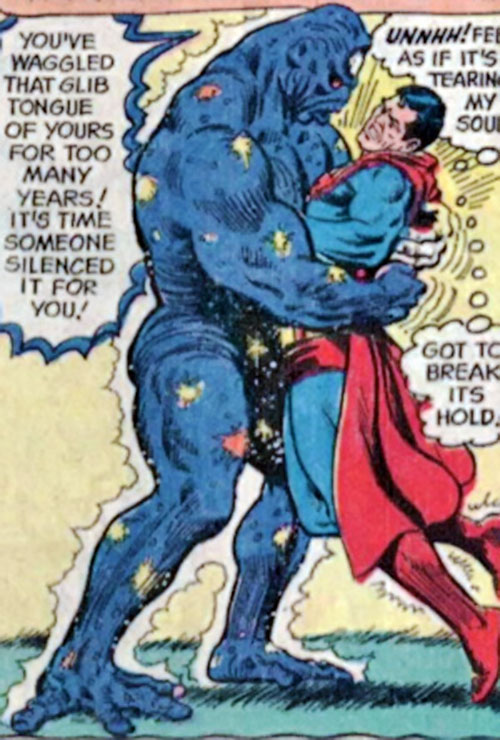 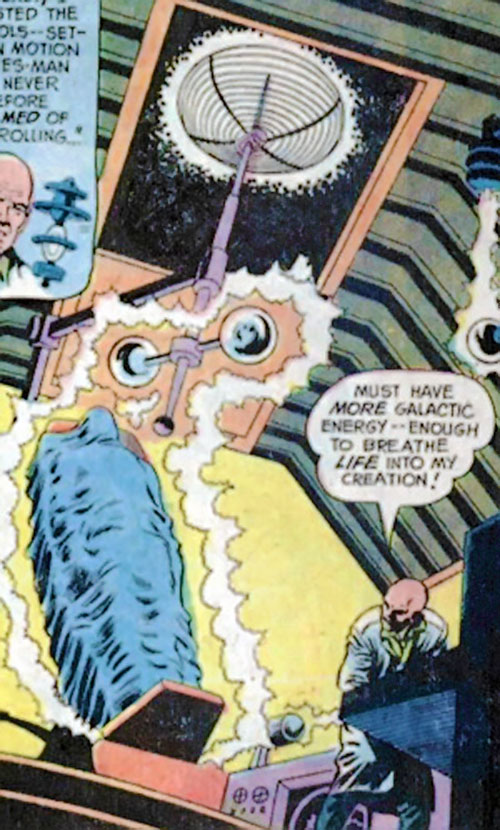