Golovin is a crack soldier from the redoubtable Russian Spetznaz units. She is a world-class sniper – quite a few of her field kills are miracle shots performed at an extreme range. She practically never misses.

Although her MOS  is sniping, she is a fully-trained commando with skills in small arms, long range patrolling, military intelligence, close combat, vehicular operation, etc..

She is exceptionally stubborn, and has demonstrated a remarkable resilience to psychic domination. She likely received special training in telepathic resistance by Russian specialists. She also has a superior alcohol tolerance.

Galena is extremely perceptive. Not only is her vision perfect, but she also has keen hearing. She often scans her surrounding for no reason whatsoever, just out of general wariness. This is how she can spot invisible characters.

Galena Golovin was an Winter Olympics Gold Medal winner in the biathlon in the 1980s. She seems to have spent most of her military career as a Spetznaz elite commando. She proved herself in the field in Chechnya by succeeding in several difficult missions to sanction enemy leaders.

If her file was selected for the same reasons as other Team Achilles members, her past probably includes an hostile encounter (or several encounters) with superhumans.

Galena was called into action three weeks before the new UN StormWatch unit was to become active. Her commander, Benito Santini, requested her on active duty as the UN building was under siege.

Galena established that the Englishman she had met at the hotel the previous evening and was sleeping with also happened to be her future spotter. She then liberated hardware from StormWatch stocks and killed the two super-terrorists outside.

Golovin and her spotter, Charles Pinckney, have continued their relationship after StormWatch became active. The sniper team has been very successful, and has managed to survive all engagements.

Like all Team Achilles members, Golovin has some stereotypical traits from her nationality. She is a forceful, direct woman, who greatly enjoys her strength of personality and gifts for killing things. Like most other StormWatch personnel, she is resourceful, has nerves of steel and has an excellent killer instinct.

Her humour is straight faced and somewhat aggressive. She tends to make friendly fun of Pinckney – though their constant bickering is getting a bit on Santini’s nerves.

Her English includes a small bit of Russian grammar ; in high-stress moments her vocabulary and grammar become increasingly Russian.

Galena is more aggressive and likely to take risks than the prudent Pinckney – she likes action.

(Jams her pistol into the soft tissues of a recalcitrant warehouse clerk) “Get the crates, little fat man, or I will make you into little fat woman.”

Pinckney : “Spotter has identified target as one Major-General Radovan Mladic, former commander, Serb national army. Sniper, do you concur with my identification ?”
Golovin : “I confirm target as racist, genocidal, raping, murdering piece of filth.” (lining up a headshot) “Smile for Galena…”.

(During a briefing, pointing at a barely visible presence) “I have a question, Colonel. Would you like me to kill the creature clinging to the wall above you ?”

Golovin : “Captain Galena Golovin, United Nations, StormWatch. We have an operational plan to remove the two in front of the United Nations.”
Officer : “Look lady, I don’t know who the hell you think you are, but I’m not about to take orders from some split-tailed foreign cooze.”
Golovin (brutally grabbing the man’s neck and testes) : “I need your best helicopter pilot. If you agree to help me, squeak softly.”
Officer : “neeeeek”
Golovin : “I thought you might see things my way.”

“Nu sve, tebe pizda ! Bring it on, sons of bitch ! Galena has much of the hot metal for you !”

Notes:
StormWatch personnel are placed outside their normal chain of command ; while on StormWatch duty their Rank Advantage becomes a 0-pts flavour advantage. Rank more or less applies *within* Team Achilles rank, but this is quite looser than in most military units. 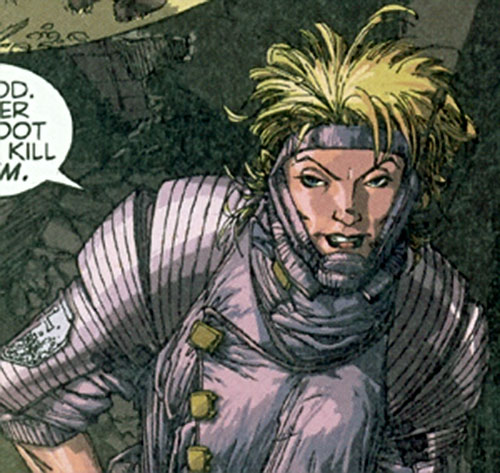 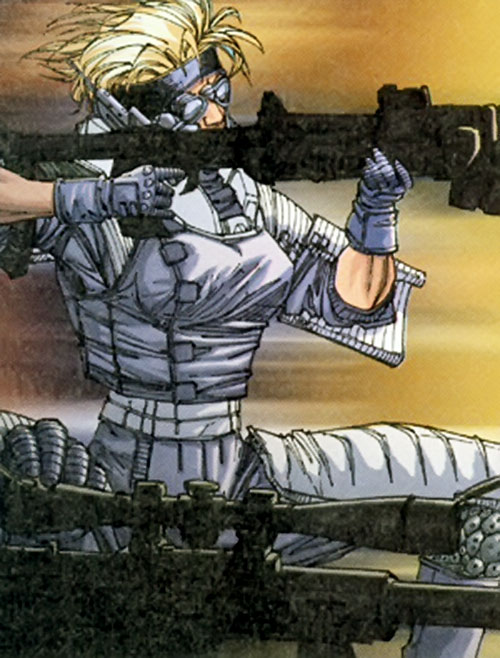