He featured during the 1990s opposite to the killer vigilante X, as part of a new super-hero comic book setting. This was Dark Horse’s “Comics’ Greatest World”, since renamed “Dark Horse Heroes”.

You can get more context about it all by reading our X character profile.

This entry has multiple S P O I L E R S for the X story.

Gamble is a cinematically -skilled hitman with :

He enjoys taking chances, and this fascination with risk makes him essentially fearless. Furthermore, he is incredibly lucky.

Gamble is also an expert gambler. Many of his skills in this domain find an application in the field – particularly his ability to bluff, and read other “players”.

Gamble’s strongest suit is probably his ability to analyse strategies and spot patterns. He excels at analysing how others think and act. However, lack of a critical piece of information — or a genuinely irrational opponent — can mess his game.

He occasionally carries a pair of dice filled with explosives. However, this little gadget is chiefly intended for diversion and delaying the opposition.

Since much of his work as a hitman involves talking to people and unearthing information, Gamble has a full array of detection and streetwise skills.

Gamble is an itinerant gambler and hitman with solid underworld connections. He usually works in the most crime-ridden US cities, such as Steel Harbor or Arcadia.

He seems to be an unusually gifted man who developed a fascination for chance to spice up his life.

In 1994 Gamble was hired by the Llewellyn brothers. These were Arcadia mobsters who had received a first warning from the killer vigilante only known as X. However, seconds after Gamble took his $25K and left, X killed his employers for having hired a hitman.

Crime in the city

Gamble also immediately attracted the attention of Carmine Tango, the godfather of Arcadia. Tango briefly interrogated him, then pilfered his cut off Gamble’s cash. Tango had no objection about a hit against X, though, and let Gamble go. 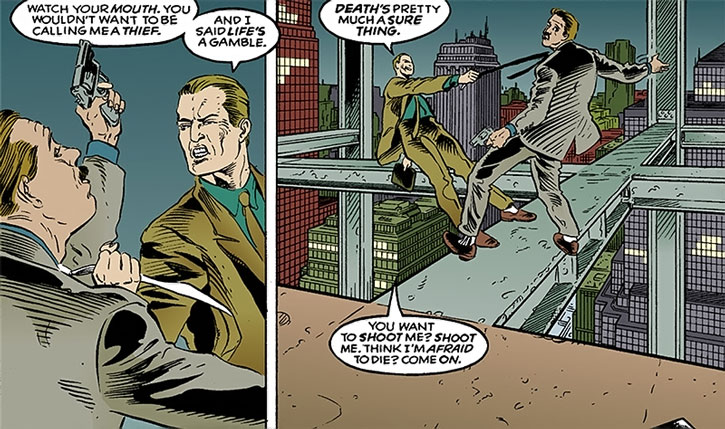 Working leads, Gamble grew curious about street urchin Miki D, whom he thought might be a lookout for X. However, X responded by apposing his mark on Gamble’s car. This was X’s first and only warning before death.

After locating the urchin’s squat the hitman prepared a trap there for X, correctly assuming that the vigilante would try to kill him once Miki D was threatened.

Gamble’s trap almost worked. X wasn’t expecting that the roof would be laced with explosives. But after this poor start the vigilante turned the tables thanks to his superhuman abilities. However, Gamble got lucky. The explosion threatened Miki D, and Gamble fled as X was busy saving the kid.

Though the hit had failed, Gamble became the first man to survive X’s mark of death.

There’ll be time enough for countin’…

Attracted by the risk, Gamble returned to Arcadia some months later. He contacted the one Llewellyn brother whom X had let live. Gamble knew that he couldn’t kill X – but he had been analysing his strategy and saw interesting possibilities. The hitman orchestrated conflicts to clear the deadwood and clear the path for Llewellyn, his tool, to become Mayor of Arcadia.

Gamble briefly clashed with X when the vigilante deduced that Gamble was behind Llewellyn. However Gamble took an hostage and called X’s bluff. He knew that the masked killer would never let an ordinary citizen die.

He then escaped to rendezvous with a deadly mercenary whom he had hired, “Wildboy” Willie McCone.

However, Gamble’s luck appeared to run out as McCone stabbed him through the chest.

McCone was actually working for a renegade U.S Army general. This man moved in and plunged Arcadia into unprecedented chaos in order to take control. However, neither the general nor McCone suspected that Gamble was still alive. Gamble was fully dextrocardiac , and the blade had perforated a lung rather than the heart.

Gamble and the X killer agreed to a truce, and their combined efforts resulted in the death of the general and his men. Gamble also killed McCone in retaliation for his near-death.

However, at the last second he impulsively lined up a headshot on X to win it all. His gun jammed, and X shot him dead in return.

Gamble usually wears a good suit, shirt and tie, with some warm colours. His hair is usually kept combed back.

He’s nearly always grinning, and projects assurance and a certain smugness in any circumstances.

Occasionally, he dresses like an Old West gambler for flavour. Or like a 1950s flamboyant gambler with a sort of zoot suit.

Gamble is smooth, smart, fearless and in control. He enjoys taking risks even when it’s not necessary, and will happily demonstrate this in order to bolster his rep.

Yet he’s not quite irrational about it. Being fearless and ready to do crazy things at the drop of a hat is an asset in his business.

Gamble doesn’t like to back down. He prefers to look on top of everything. But he’s a smooth player – he knows when to hold ’em, knows when to fold ’em.

He’s a pragmatic, ruthless, intelligent man, but he knows that his incredible luck protects him. Thus, he will sometimes push things a bit too far for the thrill of it.

Jonas Llewellyn: “How do we know he’s not going to take the money and run ?”
Gamble: “You don’t. Life’s a gamble, isn’t it ?

“I’m no professional killer. I make my living at games of chance. Murder is how I unwind. It’s something to think about…”

“Looks like you just got lucky, kid. Don’t push it. Nobody’s luck lasts forever. Nobody’s but mine.”

“I never seem to have lasting relationships. Lucky at cards, as they say…”

“Got to go. I hear the wheel spinning.”

“Others, they’ve thought they were smarter than him, or tougher. They didn’t *get* it. They didn’t think like him. Once you work out his logic, he’s obvious.” 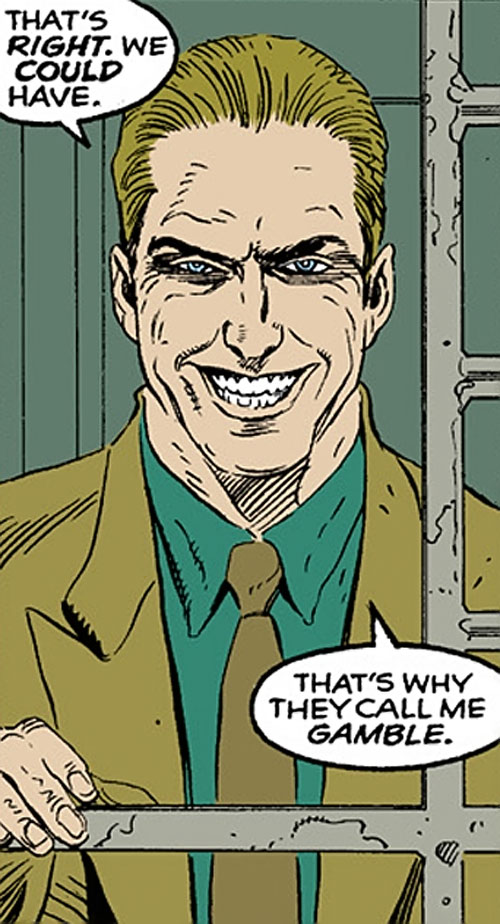