Gamecock is a deservedly obscure, ludicrous-looking costumed criminal who fought Captain America in 1975.

He has occasionally pecked his way into minor appearances since.

Gamecock is actually a superlative acrobat, able to jump great distances, and an excellent martial artist. He may look stupid but he’s plenty dangerous.

He wears wicked metal claws over his knuckles and the back of his ankles. His acrobatic fighting style allows him to make full use of them.

Captain America, back in his last day as the costume hero Nomad, clashed with Gamecock on the roofs of Harlem. The Gamecock, working for Harlem kingpin Mr. Morgan, was trying to locate and defeat the Falcon.

He and his henchmen engaged Nomad in combat instead. They didn’t fare badly until a man with a bazooka shot at the combatants (Harlem was pretty rough back then). Gamecock and his men fled from the scene.

Gamecock was seen again years later, outside of his usual Harlem haunt – quite a few blocks to the south, in fact. He was having a domestic row with “his woman”, one Charlotte. It had degenerated into a Mexican stand-off with the police, with the Gamecock holding Charlotte hostage.

Fearing that the crisis would interrupt the date between Captain America and her friend Diamondback, the Asp sneaked by the police perimeter. She one-shotted the Gamecock with a venom blast, leaving him at the mercy of the police.

Some time later, Gamecock (along with the Shocker and Steel Wind) was mentioned as one of the villains who had “eluded” the Scourge of the Underworld. The Red Skull, the Scourge’s actual master, had the man executed and replaced by a new Scourge. 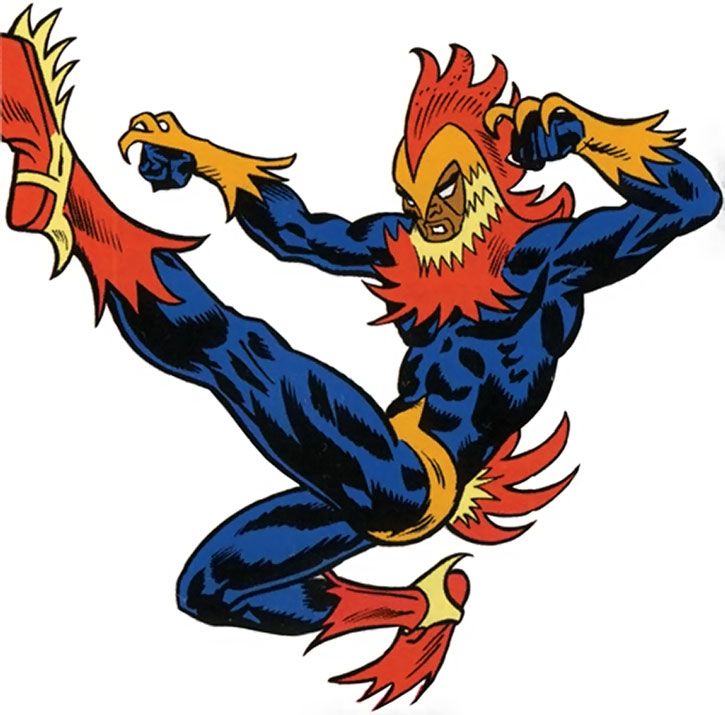 The Gamecock apparently met his end, during a Madripoor fighting tournament for superhumans. In a fight to the death, he was killed by the Puma.

This story being one of those pointless slaughters of obscure characters, you should feel free free to disregard it. I think that most of the characters killed during that mess have since returned, anyway.

Now THAT’s what I call a costume ! His henchmen wore the same costume, but without the hood or the claws. They sported a green cap instead of a hood.

The Gamecock apparently considered himself to be a big man in Harlem, though he obviously yet had to gain the confidence of Mr. Morgan. In a transparent attempt to avoid stereotype, he was quite articulate, as in the first quote.

He was far less articulate, and stopped making over-written threats, during his domestic row. Of course, it is likely because he seemed stinking drunk.

“Ask, rather, what I would have done to the Falcon had he been here when we arrived, mama’s boy ! We seek him also ! No, upon further consideration, you need not ask ! You can feel his fate… at the claws of the GAMECOCK !”

“I’m warning you ! This is between my woman and me ! I gotta teach her that nobody says no to the Gamecock !”

Drawbacks:
MIA to getting in over his head.

Gamecock’s two henchmen from his initial appearance seemed almost as skilled as he was. The three of them weren’t shy about abusing Team Attack, resulting in deadly manoeuvres. Those two henchmen haven’t been seen since. Sorry, Gamecock henchmen fans ! 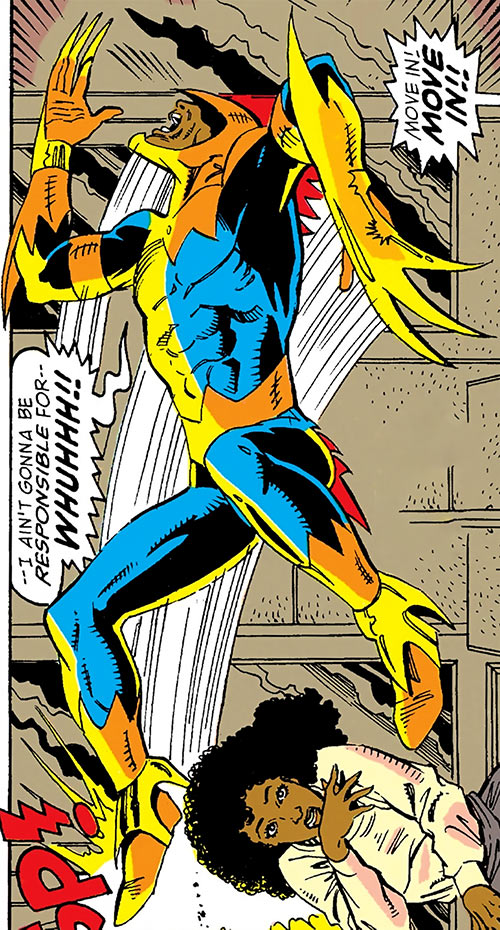