Gamora is a remarkable athlete. She is also a highly trained hand-to-hand combatant and weapons specialist. Gamora has reportedly mastered the armed and unarmed combat techniques of more than 83% of known spacefaring races. By age 15 she could easily defeat one of Sanctuary II’s combat training droids.

One of her specialities is to deliver two or even three blows at once, against multiple opponents, using multiple limbs. Her ability to punch or kick multiple opponents all around her at the same time, and her general alacrity and nimbleness, seem to be superhuman. World-class martial artist Moondragon has expressed amazement at Gamora’s moves.

Gamora also received extensive reconstructive surgery and artificial replacements. These used some of the techniques Thanos used to enhance himself. Enhancements include :

Thanos once indicated that Gamora’s strength had been enhanced to levels comparable to that of Adam Warlock’s. This seems to be in the right ballpark given how hard Gamora usually hits.

One panel implied that this strength stemmed from muscle-like synthetic tissue anchored to her artificial skeleton. This specific enhancement apparently took place some years after Gamora had to be surgically reconstructed.

Early on, Gamora often wore light banded gauntlets of advanced alloy, with spikes on the knuckles. She also wielded Godslayer — a dagger forged using a metal with metaphysical properties. Godslayer is reportedly able to kill even godlike beings, such as the Magus.

We know that Gamora was nearly imperceptible to people from Reality-7528 while in Reality-616 . It is possible that she acts like a chronal anchor (much like Bishop did during the original Age of Apocalypse).

Between this and the subtle relationship she involuntarily developed with the Time Gem during her time with the Infinity Watch, she might manifest strange chronophysical  properties if the plot called for it. See the “Crisis on infinite Zen Whoberi” section.

Gamora is not originally from the main Marvel reality – Reality-616. She’s from Reality-7528, where she was a small child growing up on the Zen Whoberi planet. The lives of the peaceful, near-human Zen Whoberis were all about their religions – but Gamora was apparently too little to have been taught about those.

When the Church of Universal Truth came to Zen Whoberi-7528, the natives gently refused to convert. The Church’s Grand Inquisitors then herded them all into a valley, which they had secretly surrounded with energy cannons. The planet’s entire population was slaughtered – but for one child.

Reality-616’s Thanos had come to Reality-7528. He was there specifically to find somebody who was from the future, from an alternate reality, and had been exposed to the depredations of the Church. He teleported in, protected the child Gamora with a force field, and teleported back to Reality-616 with her.

In Reality-7528 the Zen Whoberi genocide was committed by the Church of Universal Truth under the Magus’ orders. Or rather will be committed, since Reality-7528 seemed to be several decades ahead of Reality-616. However, later accounts (including from Gamora) state that the Badoon alien conquerors were the ones who conducted the massacre. 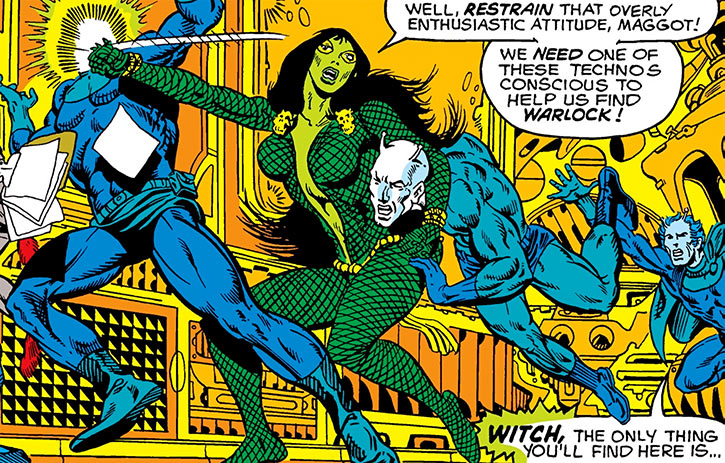 The simplest explanation is that Mr. Starlin got one detail wrong about characters he created nearly 20 years before. But that’s not *fun*. Three possible No-Prize  approaches are:

Thanos told little Gamora about the Church and its leader, the Magus. Thanos also told her that he was now her master – and that one day he would send her to kill the Magus.

To that end Gamora was intensively trained as an assassin on Sanctuary, Thanos’s legendary spaceship. She gradually received numerous treatments and enhancements to make her superhuman. She also was taught innumerable armed and unarmed martial arts.

Since the number of forms she studied is manifestly impossible, some sort of time compression (limbo dimensions  ?) likely was involved.

Thanos did not want to create a psychopath. He wanted Gamora to be smart and flexible, and to have a sound and rational mind. He thus tried to fix her a vaguely normal childhood, and raised her personally. He came up with a birthday for her, and invented various regular holidays, including a sort of Terran-style Christmas mixed with Yule.

Though in denial about it, Thanos came to develop vague paternal feelings toward the child. Gamora never realised this, being too young. 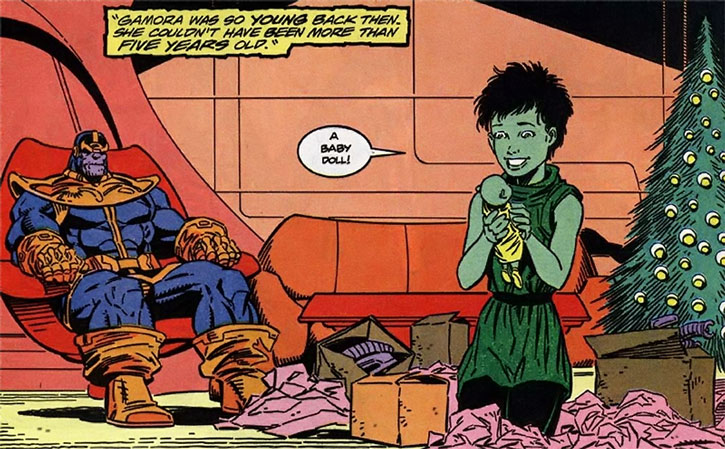 When Gamora was about five, an assassin managed to sneak aboard Sanctuary and reach Thanos. As he was aiming his energy weapon, Gamora spotted the killer and hurled her doll into his eye, ruining his shot. Thanos then blasted the would-be assassin to ashes.

Little Gamora took no pleasure in the kill. Instead she tried to leverage her good deed by asking Thanos if they could go watch the dolphins together in Sanctuary’s recreated lagoon.

Thanos thus realised that he had not created the perfect assassin after all. To his eyes emotions were weaknesses. All that the Gamora project had produced so far was a disquieting paternal attachment in himself, and an innocent child who insisted on treating him like a father and wanted to spend time with him.

We can rebuild her

Thanos kept many secrets from the trusting Gamora, such as his death worship and his occult activities. It even seems possible that he installed some sort of mental blocks in the youth to prevent her from noticing discrepancies.

By age 15, Gamora had completed the bulk of her combat training. Shortly after this birthday, Gamora disobeyed Thanos’s instructions and went planetside on Tartoonla#7, where Sanctuary II was then docked. An impressionable and sheltered kid, Gamora went shopping for baubles and fabrics, mistakenly walking down the wrong back alley as she carried her finds back to the ship.

She was ambushed by a motley crew of large aliens, who eventually overwhelmed her through sheer numbers and massive strength. Gamora was very badly beaten and abused until Thanos found her, slaughtered all assailants and took her back to Sanctuary.

Much of her body was destroyed and not salvageable. Thanos had to replace and enhance large chunks of it, turning Gamora into a cyborg. The renegade Titan Eternal favoured light, discreet enhancements rather than the raw power alterations he had made to himself. Thus, Gamora’s cyborg nature is not visible to the naked eye.

Against the Church of the Universal Truth

In Reality-616, the Magus had yet to manifest himself and take over the Church of Universal Truth. Thus, Gamora had years left to further train herself. To hone her edge, Thanos gave her lists of the Grand Inquisitors whose Reality-7528 counterparts had been/would be behind the Zen Whoberi genocide.

Gamora assassinated many of those and became greatly feared among Church officials. 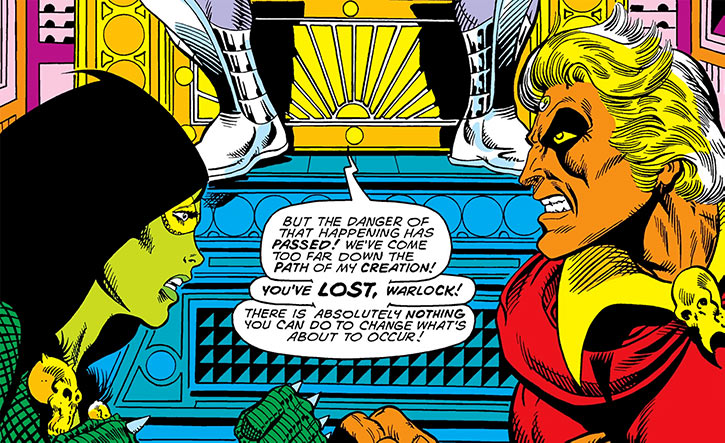 Eventually, the Magus did come to Reality-616. As Thanos had predicted, he took over the Church after killing its Matriarch. Gamora was sent to Homeworld, the Church’s base, to confirm that she could not be sensed by the tyrant due to her anachronistic nature.

As she approached the Magus, Gamora allied with Pip the Troll. Pip was a friend of Adam Warlock, a unique artificial being who was fated to become the Magus in the distant future.

Gamora and Pip made their way to the Magus. As they arrived Adam Warlock engaged his future self in combat. Activating her mindlink with Thanos, Gamora was instructed to wait a specific moment to strike. However, just as she did, the Magus narrowly sensed and foiled her attempt while simultaneously defeating Warlock.

Gamora was left facing the Magus alone, with no idea what to do.

For Thanos is death itself

Thanos then teleported in to help. Decades before, the mad titan had foreseen the full scope of the threat posed by the Magus. Even if Gamora failed it was necessary to put an end to it.

After fighting off an army of knights of the Universal Church and finding the dying Matriarch, Thanos, Warlock, Gamora and Pip teleported to Sanctuary to regroup. However, the Magus tracked them down and soon followed with the Church’s elite death squad at his side.

These troopers were killed. Warlock took Pip with him and dove under the cosmos to confront the In-Betweener. Thanos and the Magus clashed in a cosmic deluge of energies. Obviously out of her depth, Gamora retreated into one of Sanctuary’s armoured life pods.

Thanos’s plan B worked, and the chain of events resulting in Warlock becoming the Magus was broken. Reality-616 was fixed, the Church was erased out of existence, and Thanos left with his green-skinned assassin at his side.

Thanos now had little use for Gamora. He decided to send her to guard Warlock. This way the golden-skinned would-be saviour would not recklessly kill himself in some strange caper since Thanos might need him later.

Gamora, having an adolescent romantic interest in Warlock, welcomed the assignment. However, soon after she left Sanctuary II, Drax the Destroyer flew right through her spaceship, destroying it. 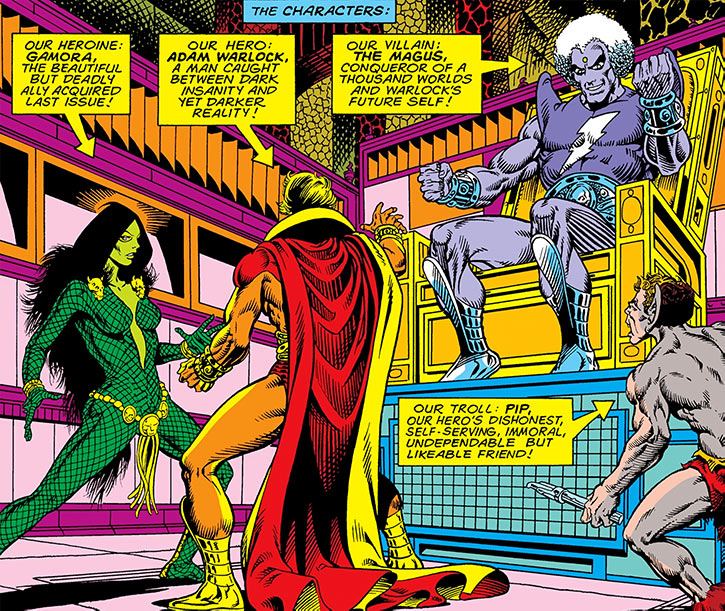 Meanwhile, Thanos launched his bid for universal destruction with the Cosmic Cube, attempting to woo Death. The ploy failed thanks to universal protector Captain Mar-Vell and his allies. After recovering, Thanos started questing for the Infinity Gems, which were then mistakenly called the Soul Gems.

Gamora somehow survived the Drax incident, and eventually made her way back to Sanctuary II. There, she realised that her adoptive ’father‘ was morbidly insane and about to launch another attempt at stellar genocide. Gamora tried to stop him, but he survived her dagger thrust and killed her. Thanos then murdered the interfering Pip the Troll.

Minutes later Adam Warlock came in and collected the souls of both Gamora and Pip into his Soul Gem.

During the titanic struggle against Thanos, Warlock was also killed. His soul joined the others within the Gem, in an idyllic realm of peace and understanding called the Soulworld. Warlock was briefly summoned back to the real world as a being of spiritual fire, who petrified Thanos. He then returned within the Gem, where he became Gamora’s lover.

However, the peace, love and solace Gamora experienced within Soulworld would eventually be broken.

The yellow motifs around her eyes are some sort of war paint or makeup, and not an actual part of her facial features. Likewise the darker green of her lips seems to be lipstick.

At this point there’s a cyan motif over Gamora’s dialogue. We might imagine that this corresponds to a cybernetic voicebox still sounding slightly robotic.

During her earliest appearances, Gamora came across as a sort of Heroic-Space-Fantasy Sultry Killer Vixen, with a vague 1970s blaxploitation vibe.

Presumably this was but a phase for her – she was still in her teens, and had little idea about how she should behave. Her only exposure to something resembling society was presumably watching movies on Sanctuary II.

Though her characterisation during this early era was sparse due to lack of material, Gamora would gain more exposure – see our second entry about her for more.

(Languidly producing a dagger) “Keep your hands on the bar, maggot, ’less you want this in your gut !”

“Unfortunately, your flair for dynamic entrances far surpasses any fighting skill an ice blue cretin such as yourself might possess !”

Thanos: “Gamora !”
Gamora: “I already stand by your side, Master ! Your left flank is well protected !”

Drawbacks:
Socially Inept, Unluck. When operating on some worlds with low alien presence (such as Earth), Gamora may have the Creepy Appearance Drawback. 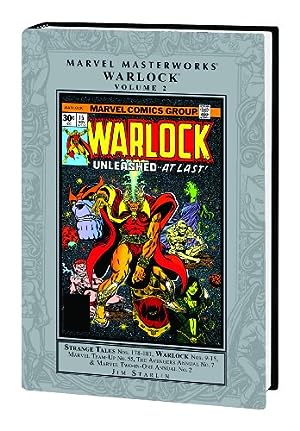 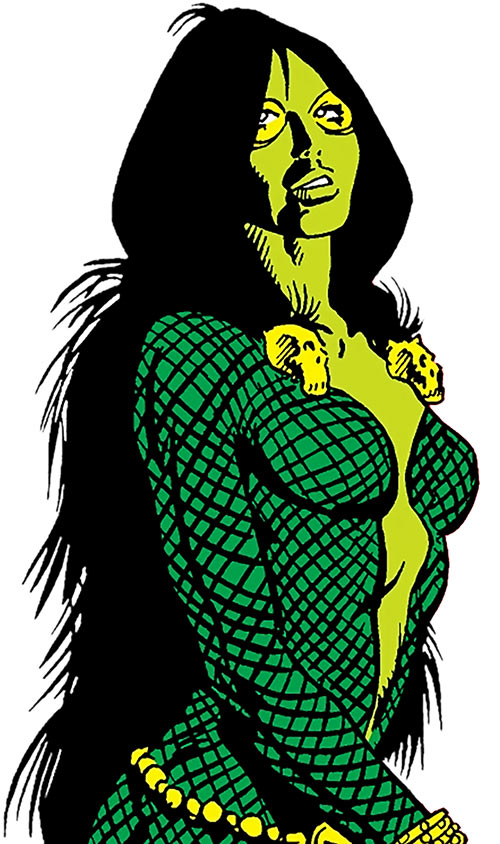 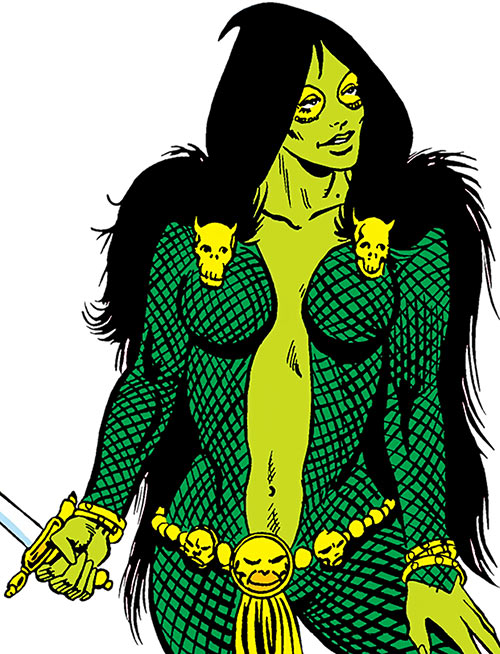 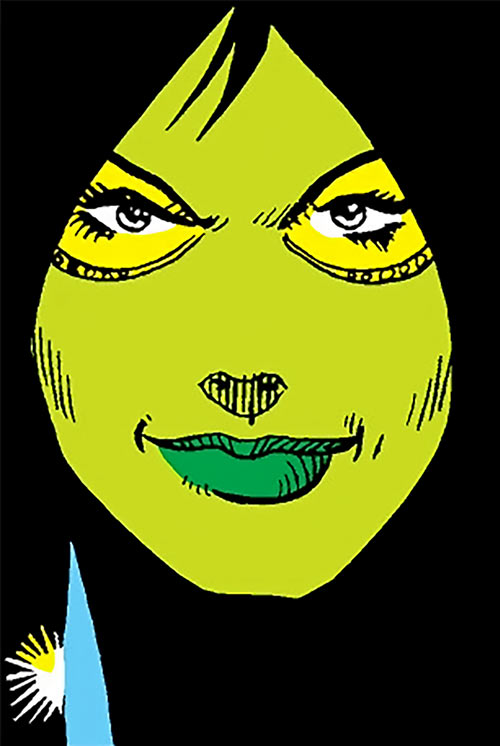 Hidden in the shadows, with dagger drawn. 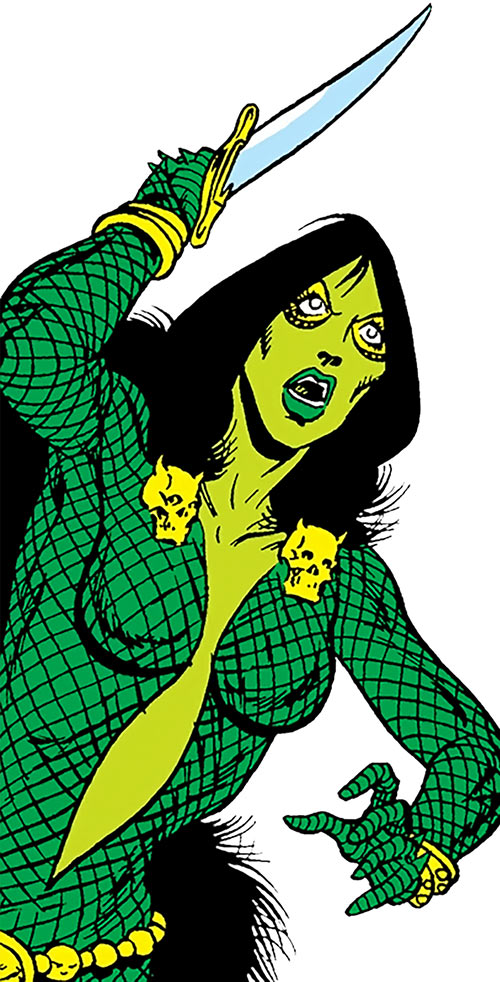 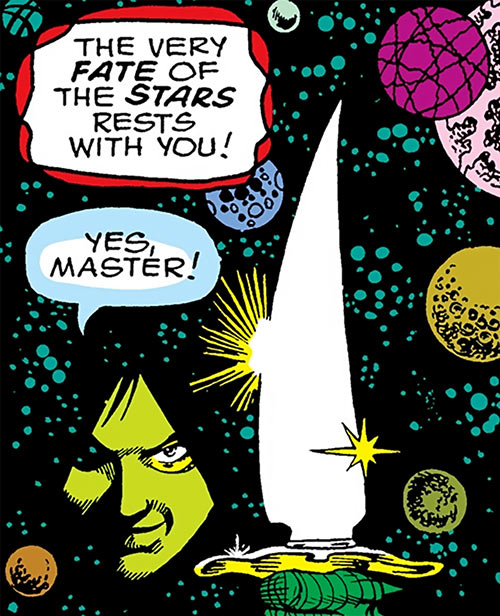