Gargantus is an enormous humanoid with superhuman strength and durability, and equipped with an gigantic club.

Though one might expect such a creature to fight like a tank , it is actually pretty fast and displayed ape-like agility. It is a good acrobat, and was highly mobile in an urban environment.

But Gargantus’ main power was his mirror-like eyeballs. These reflected and emitted light in hypnotic patterns, and housed some sort of technology to mesmerize humans. Those falling under his spell would follow him like some sort of great cult leader or demigod.

80,000 years ago, an unspecified alien species of little green men visited Earth, observing primitive hominids. In 1963, a small spacecraft carrying two such aliens and a special robot reached Earth and attacked the US.

Their robot was a giant primitive hominid with a lot of hair, fur briefs and a giant club. Apparently it was meant to come across as a god, to help deploy its mesmeric powers and turn the population into slaves.

The plan worked at first, even though the robot’s appearance was now a smidgen anachronistic. The robot Gargantus took over the burg of Granville, and had the hypnotized inhabitants toil on various works.

These included sculpting a giant statue of Gargantus to be worshipped, erecting a wall around the town, and passing laws barring outsiders from crossing the city limits. Due to these laws, the authorities did not attempt to get in.

It was Iron Man (Tony Stark) who came in, observed the situation, challenged Gargantus to a duel, deduced that it was an alien robot, wrecked it and chased the aliens away. Granville was free ! Yay !

Encounter of the thug kind

The two aliens had parked their flying saucer above the city, and the craft emitted a dark fog to look like an (oddly stationary and isolated) storm cloud. As soon as their robot was wrecked and Iron Man launched an attack at them, they ran.

They were grossly unprepared, their notions about humans were vastly outdated, and their overall plan was unclear. Simply seeing Iron Man, they jumped to the conclusion that there existed an army of such defenders (?).

One gets the impression that these guys were the equivalent of a pair of juvenile delinquents who stumbled upon an incredibly old robot prepared for a long-since abandoned project. They tried to use it despite having little idea of what they were doing, and turned tail as soon as it went south.

Alien robots using a similar technology were encountered not long after that, in New York City. However they looked like metallic robots – they weren’t disguised as organic beings.

These were defeated by Iron Man (Tony Stark) and Captain America (Steve Rogers), who had but recently emerged from suspended animation.

Gargantus was an aggressive brute with a domination instinct, like some male primates. It growled but didn’t speak, so how it gave orders to townsfolks is unclear. 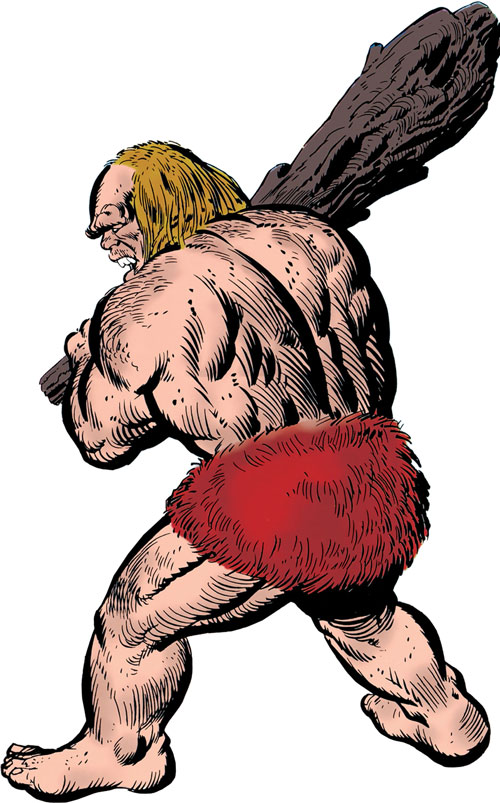