He’s an expert with his namesake weapon. He’ll arrange to get behind his opponent without them noticing, then wrap his garrotte around their neck and pull hard.

He’ll leverage his weight, use any convenient nearby item (such as a subway pole) to brace himself, use his knees to put his victim off-balance, etc.. In DC heroes RPG terms, the presence of a convenient item to brace himself on might be good for a further +1/+1 to AV/OV for his Grappling Attack (GM’s call).

This is a deadly attack, with a 06/06 OV/RV in Grappling combat (between the weapon and the Schtick). Plus a Combined EV attack as the sharp wire of the garrotte cuts even through Kevlar, plus any suffocation effect. Even the Punisher couldn’t break the grip and ended up burning a fair few Hero Points  to survive.

Garrotte is surprisingly stealthy for such a large man. That’s a good skill to have given his modus operandi.

Garrotte was one of the seven international hitmen hired by American mobster Rosalie Carbone to eliminate the Punisher. Thinking it would motivate her hires, Carbone offered an astronomical bounty (five mils in early 1990s dollars). 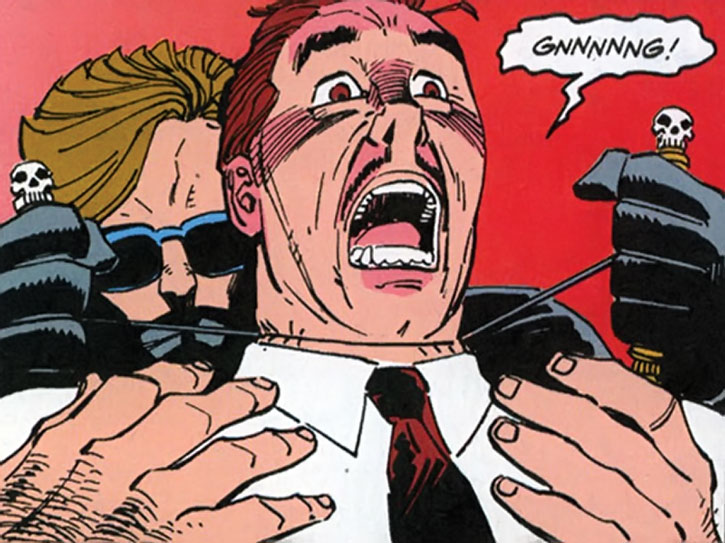 Garrotte teamed up with his colleague Tequila. She’d distract their target and allow him to step behind the Punisher and do his job. This very nearly worked, and the Punisher almost ended up strangulated to death in a New York subway car.

The vigilante managed to turn the situation around using the emergency brake. He then shot his aggressor point-blank in the face.

Garrotte hasn’t been seen since and is presumed dead.

He nearly never speaks, unless the situation critical (such as telling his partner to stop shooting since she might hit him). Perhaps his own throat was wounded at some point and speaking is painful.

Silent, professional killer. Garrotte knows what he needs to do and how to achieve it.

He has been known to use mildly cinematic  techniques for murder – such as using his garrotte to slide along a telephone wire and reach an open window to sneak into his target’s house.