Garv is a classic brick .

One day, the idealistic Garv simply went to a L.E.G.I.O.N. recruitment centre. He explained that he wanted to make a difference and fight for the common good.

He rose to become one of the core L.E.G.I.O.N. officers, and in this position met Strata, his great love. In at least one alternate future, they somehow have a kid together.

Garv is the nicest guy in the L.E.G.I.O.N.. He’s just swell. He’s tough, decent, brave to a fault, likes people (even hardcases like Lady Quark and to some degree Dox, although he draw a line at Lobo) and is a card-carrying altruist, to the point of self-sacrifice.

He likes his job as a do-gooder, and is highly dedicated to it, making him the most reliable member of L.E.G.I.O.N.. Oh, and he also as a sense of humor to balance the fact that he tends to be overprotective.

The dominant side of Garv’s personality during his L.E.G.I.O.N. years was his love for Strata – he cared about her very much. This also mean they were often paired together, resulting in a formidable duo of bricks that could crush most forms of opposition.

“Just what kind of sicko are you — attacking a wounded woman ? See what you can do with *me* !”

By Sébastien Andrivet (v1 is Mayfair’s). 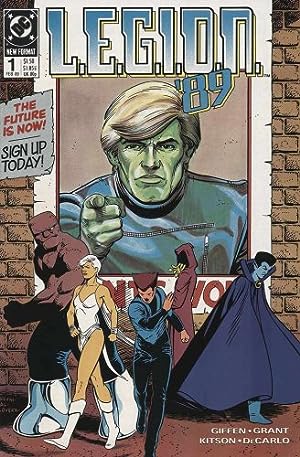