Geckos are mutated, enlarged, humanoidised versions of the pre-apocalyptic lizards.

The changes seem mostly caused by radiation, which in the Fallout universe operates along a 1950s pop movie understanding of physics ; howbeit the Forced Evolution Virus likely played a role.

The post-apocalyptic geckos have a beautiful, durable, shiny skin. Trappers and hunters have developed techniques to hunt and skin them and some villages, such as Klamath in California, live primarily from the gecko skin trade.

Most geckos have a silvery white hide, but a larger subspecies has a golden tan hide, which is more valuable. Geckos that appear to be very young specimen have a greener skin (less valuable than silvery ones), and rare firebreathing geckos tend to have a black skin (a bit less valuable than golden ones).

Hunters often cure and recolour (e.g., using stripes) the skins to make them even more valuable. A common method to do this involves acid and herbal compounds. 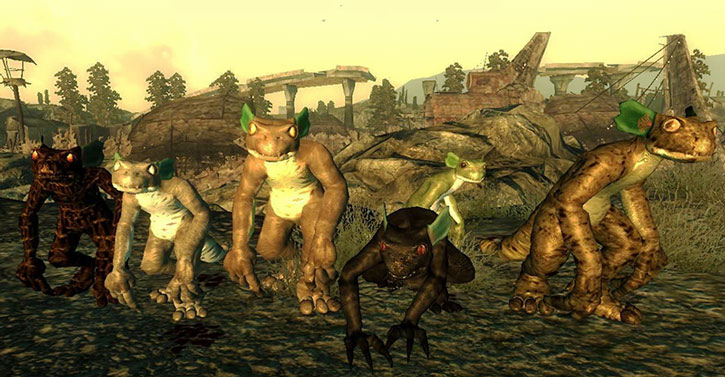 Golden geckos seem to be silver geckos who have further mutated by licking radioactive fluids leaking from a pre-apocalypse underground installation – those in California might all come from a single network of caves North-West of Klamath, but can now be found within many days of walking from that spot.

Golden and silver geckos occasionally mingle. As far as is known, geckos never attack each other.

How smart geckos are is unclear – they largely behave like animals, but their spontaneous formation in packs to defend themselves suggest a sort of communication. In 1950s atomic horror logic, their humanoidised shape also suggests an early stage of uplifting through mutation.

It is possible that mutated geckos – particularly golden ones – operate on the level of wolves. Secondary sources mention packs of roaming geckos who do not have a visible hierarchy and simply help each other with food, child-raising, defence, eggs-carrying, etc.

It is possible that they have some sort of proto-language (perhaps similar to the songs used by dolphins), and/or use pheromones or other chemicals to coordinate among themselves.

Geckos are not generally aggressive, especially if one says at a good distance. However they are robust animals, and once they have decided to attack they will not back down, biting with their powerful fangs and not letting go.

An adult gecko’s bite can mangle a man’s legs, leading to further attacks once the human is down. Furthermore, any nearby gecko will join the fight – which can result in a bad situation for hunters who hadn’t realised that there were other geckos nearby. 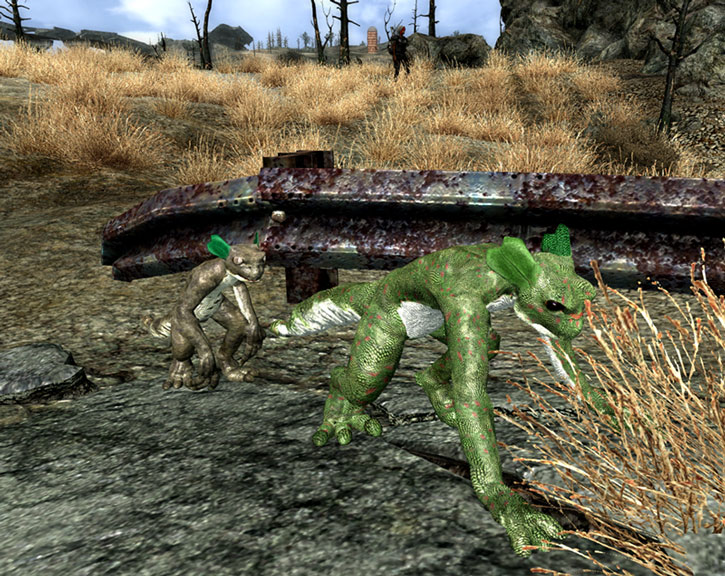 Geckos in the Capital Wasteland.

Though the real danger is their bite, geckos also have claws. These claws top five-fingered hands that seem oddly human-like, and are presumably prehensile. It is entirely possible that geckos occasionally use natural tools, such as twigs, to reach food.

The larger, golden subspecies is as strong and tough as a large fighting man, and can be dangerous even for hunters equipped with 10mm firearms. They are also markedly more aggressive than the smaller silver geckos, and their saliva and other secretions are radioactive. Hunters using spears generally prefer to pair up to attack a golden gecko.

Fire geckos are aggressive predators, and can belch a surprisingly large jet of fire.

Geckos can move fairly quickly despite their waddling gait – our game stats assume that part of this is leaps like the ones they perform in Fallout: New Vegas. They also seem to have very robust bones, as long falls or getting caught in a cave-in often inflicts little telling damage.

Advantages
Misc.: Geckos have prehensile hands and can communicate among themselves.

These are smaller, greener and presumably younger mutant geckos. Lower Claws, Martial Artist, and BODY by one compared to a silver gecko, and add an AP of Shrinking (Already Factored In).

Lil‘ geckos appear to be inoffensive, and roam around – presumably to feed on insects and larvae. They are occasionally seen with larger geckos, possibly their parents.

Advantages
Misc.: Geckos have prehensile hands and can communicate among themselves, Misc.: golden gecko bites will lightly irradiate their victim, but such small doses are unlikely to pose a problem by themselves.

These can belch flame. Use the Golden Gecko stats but add Flame project: 04 with a Range of 01 and the Diminishing Limitation, and one AP of Damage Capacity.

Remember that these stats assume ordinary characters with low firepower and few HPs. A random trapper with a 10mm pistol (AV 03, EV 04) will need to empty about half a clip into a golden gecko to stop it. 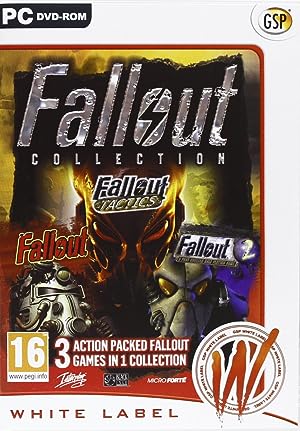 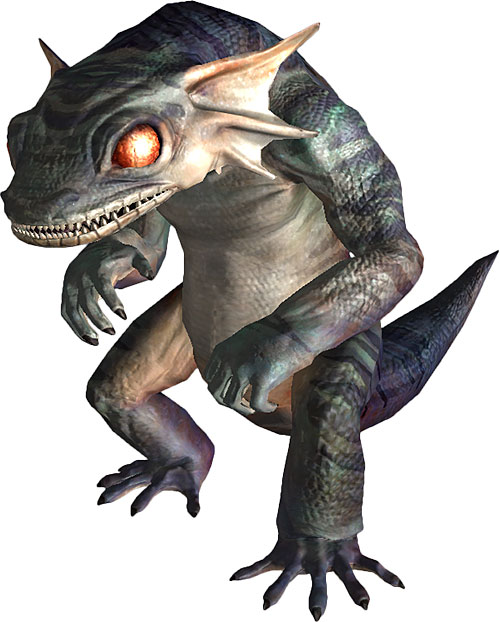 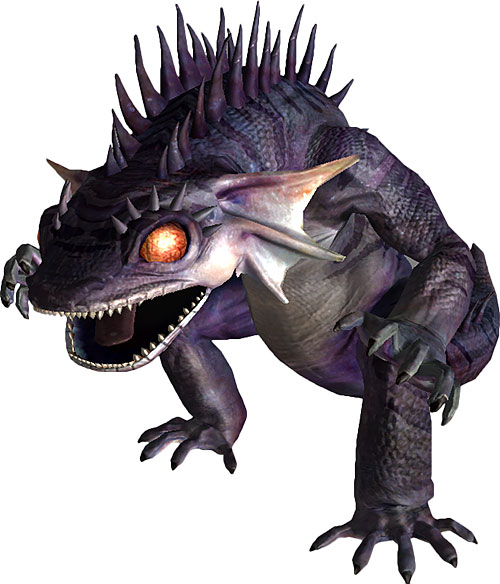