The UK branch of Marvel has been around since the 1970s. It has generally been a low-key affair. However, during the early 1990s, they published a burst of original super-hero material. Most featured new British characters, with Marvel US characters guest-starring for exposure.

This was unexpectedly successful, as the material was well tuned into the “guns and pouches” aesthetics of those day. But that also meant it wiped out a few years later, during the super-hero comics market crash.

This brief era is now a tad obscure. But that and a certain genericness in design means that these characters can just be plugged in. Which is useful for gamemasters.

Thus, if you need a stock team of low-powered superhuman soldiers/operatives from a somewhat shadowy organisation — and who doesn’t ! — the Gene Dogs are a swell bunch.

Purpose:
A defense and counter-terrorism mandate, not unlike S.H.I.E.L.D.’s, with a focus on “super-terrorism”. S.T.O.R.M. is a “pan-European” operation. Yes, these terms are vague.

A non-superhuman strike team is 10 or 12 persons with high-end assault weaponry. It can be deployed by hover-capable supersonic transport. That vaguely evokes an XCom Project commando with pre-invasion tech.

Extent of operations:
Global network of hidden bases from which to stage and support operations. For instance, one such base was in Nairobi.

Bases of Operations:
The main base is a high-tech subterranean complex, two miles under North Wales. It is unusually well-hidden. The main access is a large (airplane-capable) camouflaged elevator near a castle ruin, in the wuthering moors.

This base has psionic  shielding to prevent teleportational invasion, telepathic observation, etc.. It can stop minor superhumans, but probably not big-name ones. 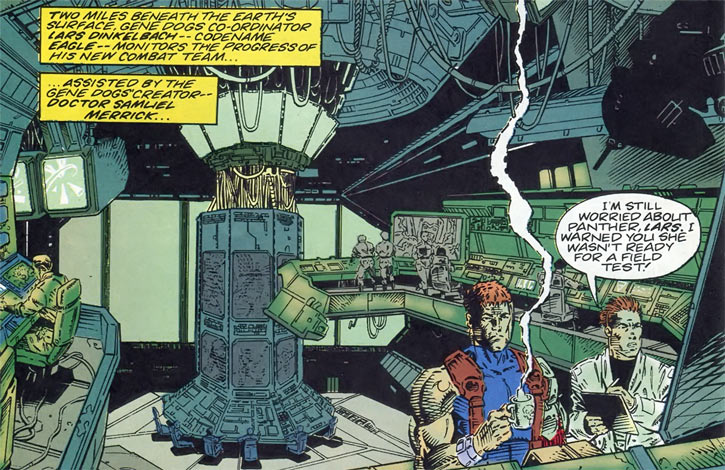 Organizational structure:
The Gene Dogs were overseen by Lars Dinkelbach (codename Eagle). He was a former field operative now working command & control due to wounds.

The other named S.T.O.R.M. higher-up were Dr. Samuel Merrick, and the seemingly useless Lord Winstanely.

The non-superhuman S.T.O.R.M. troopers have good military equipment, with some comic-book stuff (mainly vehicles). The Gene Dogs have bespoke equipment to help cope with their mutations, but no standard gear. 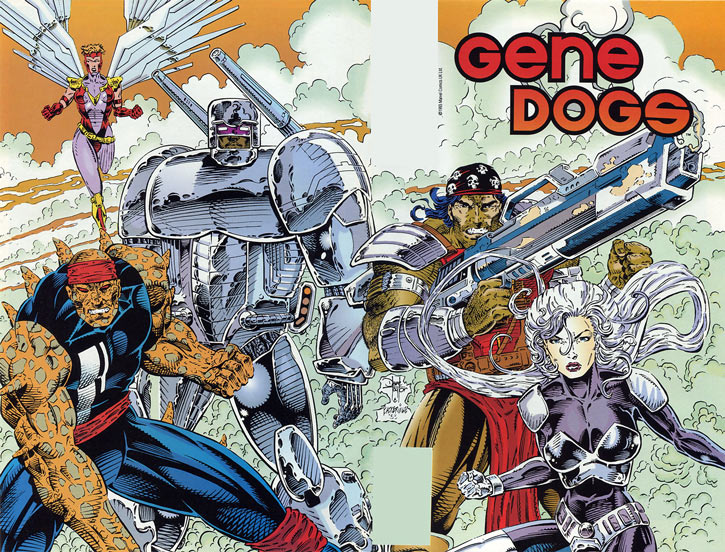 S.T.O.R.M. could endow a small team with minor superhuman abilities – the Gene Dogs. There are many limitations, though :

S.T.O.R.M. was but briefly seen in 1993. It was described as a recent creation. It is *possible* that it reused assets from S.T.R.I.K.E., a loosely similar British organisation that fell apart during the second half of the 1980s. However, S.T.O.R.M. was a “pan-European” agency, which likely means that it answered to the European Community.

It is explicitly noted that the successor to S.T.R.I.K.E., Great Britain’s RCX (Resources Control Executive) had no links to S.T.O.R.M..

He had personally recruited his troops, not all of whom were career military. Notably, the newest member of Team Omega, Annie Jones, was a young hacker. The commando’s other woman, Corinne Walton, seemed to be a martial artist rather than a soldier.

One gets the impression that all team members were British.

In 1992, the team raided a clandestine research centre in the DR Congo. As they exfiltrated, they were ambushed by a mutated monster. All were grievously wounded, and infected with an artificial virus preventing their body from healing. The team was urgently flown back to Wales.

By this point, Dr. Merrick had just developed the latest version of his “gene match” device. It could repair or enhance bodies using engineered foreign DNA. Most such DNA came from animals.

The process was completed by “gene chips” implanted in the cortex to allow the subject to control their new abilities. Since the Team Omega situation was desperate, the process was used to save them.

A previous attempt had taken place in 1989, to try and save the badly wounded Dinkelbach. It had failed, leaving Dinkelbach crippled and only kept alive by cybernetic implants. But the process had been improved since. Though it wasn’t perfect, it did save Team Omega and turned them into low-superhuman operatives.

The mutated team became known as the Gene Dogs. That likely was an informal denomination.

(Some of the DNA used to save the Gene Dogs does not seem to be of Earthly origin. It is thus likely that S.T.O.R.M. had links with the Dream Nails facility, or its predecessor. The Dream Nails base holds captive xenomorphs  and experiments with their biology. It later would fall under the Black Air intelligence agency’s remit.)

S.T.O.R.M. created at least one other low-superhuman. It was Cat (Emma Malone), who seemingly commanded a regular assault team. 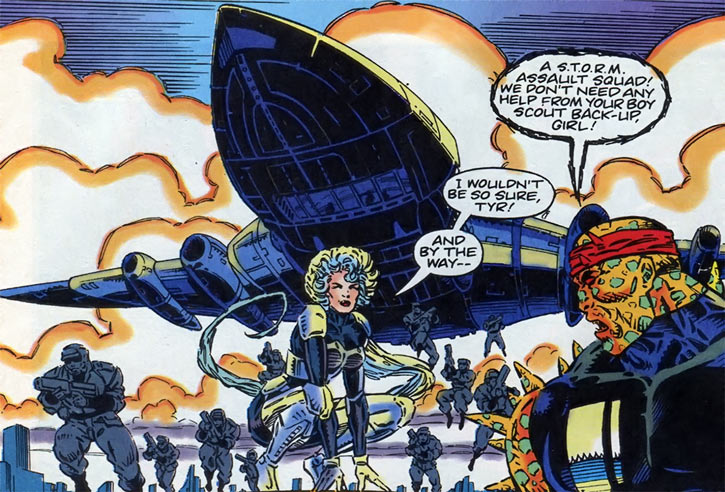 Furthermore, it was eventually revealed that S.T.O.R.M. has previously run early tests on prisoners. That was done against all legal or ethical considerations. One of the victims of these tests was Hurricane (Albert Potter), who had once fought Captain Britain (Brian Braddock).

The Merrick technology is somewhat similar to the one used by Jonas Harrow, for instance to create the Fly (Richard Deacon). It also resembles treatments used by Mys-Tech.

In 1993, S.T.O.R.M. clashed with Mys-Tech. Mys-Tech is a corporation with vast wealth and deep ties with the hell-lord Mephisto. It manipulated both S.T.O.R.M. and Otomocorp, a rival corporation set up by a renegade former operative of Mys-Tech. The goal was to have both these parties destroy or at least weaken each other.

The Gene Dogs clashed with the Q7 Strike Team, a minor superhuman mercenary team hired by Otomocorp. During one such battle they lost Panther (Corinne Walton). Cat (Emma Malone) joined the Dogs as her replacement. S.T.O.R.M. then realised that Walton had been a Mys-Tech plant, though they didn’t tell the team right away.

(Mys-Tech were the Big Bad behind most of the early 1990s Marvel UK meta-plot . It was… confusing. Furthermore, the out-of-the-blue demise of this imprint means that there was almost no follow-up to any of it.
Only a few disparate bits later pop up in Captain Britain and MI-13 (on one splash page) and in sourcebooks (perhaps as a wink by British OHOTMU researchers).

Mys-Tech freed Hurricane (Albert Potter) and sent him against S.T.O.R.M. for revenge. Potter blamed Merrick for damaging his DNA. And of course, Mys-Tech could give him the exact location of the S.T.O.R.M. HQ. Hurricane ravaged the base and left with Merrick and the gene scanner.

Ruins outside the secret S.T.O.R.M. base.

Walton had also fed S.T.O.R.M. with slanted information about rogue mutates  team Genetix. Thinking that Genetix was a Mys-Tech mercenary crew, the Gene Dogs found and engaged them under London. But both teams had to disengage without achieving anything.

Mys-Tech then lured Otomocorp into capturing Hurricane, Merrick and the Gene Scanner. Then they ensured that the Gene Dogs were sent against an Otomocorp base deep into Siberia. It was hoped that their enemies would destroy one another there.

However, Hurricane broke free. He recaptured the gene scanner, and took it to a satellite base to use it as a weapon of mass destruction.

This forced the Gene Dogs to ally with Q7 to storm the satellite. They narrowly took Hurricane down. However, Otomocorp’s CEO then betrayed them to activate the gene scanner. Which turned out to actually have been a bomb after all.

Q7, the Gene Dogs and Merrick only narrowly survived via teleportation.

Later on, Dr. Mullarkey of Mys-Tech sent Tektos (one of her teams of superhuman mutates) to attack S.T.O.R.M.’s base. Tektos slaughtered a number of guards, but teleported away as the Gene Dog responded. Tektos had just detected that Genetix was about to teleport in, as they hunted Mullarkey’s agents. 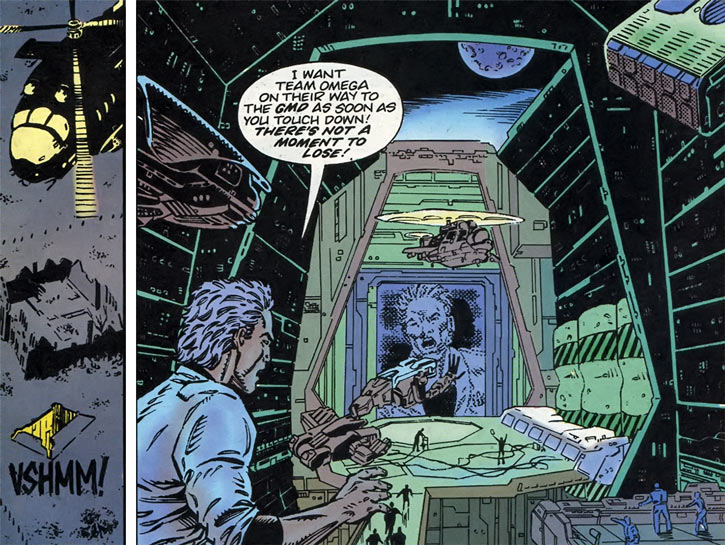 Responding Gene Dogs thus found Genetix among dead S.T.O.R.M. guards, and attacked. However, technopathic  Genetix member Vesper (Raani Jatwinder) had suspected a manipulation ever since the previous clash with the Gene Dogs. She linked with Pacer’s radio implant to contact his S.T.O.R.M. handlers. Vesper brokered a ceasefire before anybody would be killed.

S.T.O.R.M. officers were interested in an alliance. But the immature Genetix mutates left soon after they received medical care.

S.T.O.R.M. was never really seen again. It is possible that the organisation was mostly destroyed later on. Its assets (perhaps including the Gene Dogs) may have been absorbed by Black Air. Or perhaps it achieved an even greater level of secrecy, and is still operating without a trace.

In 2014, most Gene Dogs were glimpsed among a force assemble by Motormouth (Harley Davis) to repel an infernal invasion. 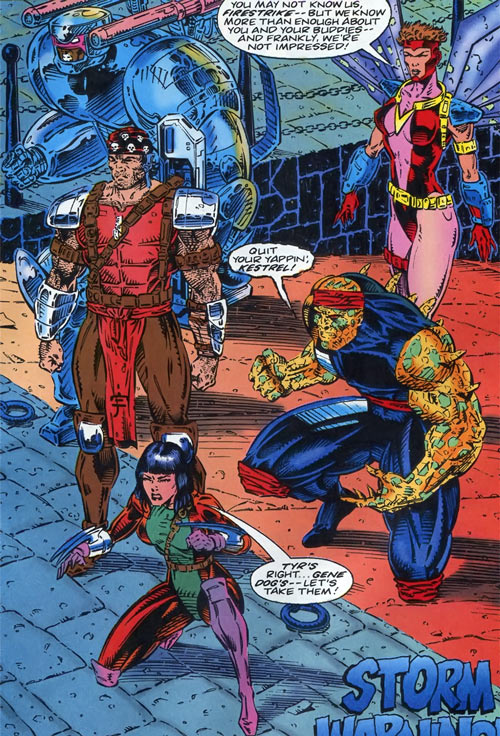