General Electric was one of the main villains during the short run of Jack Kirby’s Sandman, in 1974-76.

While he’s certainly dated and quite Silver Age  in tone, he’s interesting enough to be reworked and modernised. And he did return, though said return was very Bronze Age  and dated as well.

Reading the Sandman (Dr. Sanford) character profile first for context is useful. But this is a large and complex one.

The General boasted about having a brain with computer-like precision.

Furthermore, he was greatly skilled with electronics. He produced super-genius inventions such as a handheld video game serving as a conduit for telepathic attacks or — more tentatively — earthquake machines fed by the power of nightmares.

It seems likely that he could multitask. For instance, he likely could mentally dominate several persons playing his video games at once. But there’s not enough evidence for that to be added to the game stats.

The General also said that his electronic brain could sense invisible presences. However, that isn’t quite supported by the actual events. In DC Heroes RPG terms, it has just been rolled into his high INT.

General Electric boasted about his great willpower, though he found out that he was clearly outmatched by Wonder Woman in that department. Nevertheless, this great will apparently gave him some sort of telekinetic control over his body (or at least the electronic parts of it). Thus, he reportedly kept his brain alive and reassembled his shattered head, by willing it.

The “Commander Video” persona in his game was a sort of costumed super-villain with superhuman strength, great combat prowess and lightning powers. It was just a game persona – the actual confrontation was a mental duel, not a physical fight. Yet, Commander Video might reappear as a more tangible figure.

During World War Two, the man who would become General Electric was an actual general in the Imperial Japanese Navy Air Service. Late in the war, he headed a kamikaze strike, and somehow survived the impact. His skull was completely shattered, but he was kept alive by Japanese doctors.

Over the following three decades, they gradually rebuilt the General’s head as the Japanese electronics industry kept improving and innovating. The physicians used transistors to replace or assist lost tissues.

The General’s brain became a sort of cybernetic system encased by a transparent dome. He was periodically upgraded as new components were developed. This experimental system was used by the doctors to witness how the human brain worked and map cerebral processes. This knowledge soon proved useful in neurosurgery, to save lives and cure ailments.

The middle-aged general worked on crafts as rehabilitation. Thus, he became a dolls-maker. Over time he acquired great skills in crafting sophisticated electronic dolls, capable of many functions. Many of these dolls shared an hideous design with green, scaly features. The General called those “werblinks”.

Even after all this time, the General wanted revenge against his wartime foes. Over the decades he made contacts with other bitter, handicapped veterans from Axis nations. Together, they prepared a plan.

The werblinks held special, hidden electronics. These could be turned into weapons of mass destruction once specific dolls were connected together in a specific fashion. Thus, the ex-Axis men made sure to buy or otherwise procure every werblink that was sold by the hospital. Many werblinks were stockpiled in a dolls repair shop in Florida.

In 1974, the General — nicknamed “General Electric” due to his electronic head — finished the last werblink needed by his conspiracy. He ran away from the hospital with it. He soon linked up with his accomplices. Meanwhile, werblinks were being distributed to children in the Cape Kennedy area , near the shop.

However, an American who had discovered the plan stole a key werblink. Wounded, the saboteur washed ashore on minuscule Dolphin Island. He died as he warned the sole two inhabitants of the island — little Jed Paulsen and his grandpa — not to let it fall into “their hands”.

The ex-Axis men eventually found the stolen doll, kidnapping Jed along with it.

Though it wasn’t spelled out, one gets the impression that the werblinks in Florida were then activated to give nightmares to children. Then, the conspirators used the dream energy to trigger a major earthquake in the Cape area.

In the ’dream dimension’, the Sandman (Dr. Garrett Sanford), alerted by so many children having nightmares about the same awful creatures, came to the rescue. He first came for his friend Jed Paulsen.

Though the Sandman was captured, his nightmare demon allies Brute and Glob rescued him. General Electric was seemingly slain by the Sandman’s Hypnosonic Whistle. The sonic shock wave shattered his electronic head to prevent him from wiring together two werblinks. This pair would have triggered vast quantities of explosives under Washington, D.C..

Back in 1974, these events were meant to be in continuity. Then, a 1982 story referenced these as having occurred on Earth-1. However, in 1997, the events around Jed Paulsen were retconned  into having been dreams. See our Sandman (Dr. Garrett Sandford) entry for more about that. “Jed Paulsen” was actually whom a boy on DC Earth, Jed Walker, dreamt that he was.

The continuity status of General Electric thus became confusing. But a simple fix suggests itself. In this hypothesis Jed Walker overheard about this strange figure. Then he simply dreamt that Jed Paulsen encountered the ruthless criminal and was saved by Sandman, Brute and Glob.

It is even possible that Walker dreamt about a plot that General Electric had actually conducted on Earth-1. It would have involved his werblinks and other elements that ended up in his dream. In this scenario, the werblink plot would have occurred pretty much as chronicled.

The question that remains is who stopped General Electric, since the Sandman was active in Jed Walker’s dream world rather than on Earth. Furthermore, in his 1982 appearance the returning General Electric mentions his encounter with Sandman.

The simplest fix is to consider that General Electric actually clashed with Wesley Dodds of the JSA, also called the Sandman. This would change little to the Sandman story, though Brute and Glob would have to be replaced by allies of Dodds.

The General survived this brutal defeat. He reportedly rebuilt his shattered head through sheer willpower – and, one assumes, some sort of psychotronic  power. Apparently, the police realised what was going on as they investigated the scene, since he was taken to a penitentiary.

The Japanese veteran had been assigned to the prison’s shop. He thus had access to electronics, which he used to create a mind control circuit. This development was included in a handheld video game designed by the General, titled Commander Video. 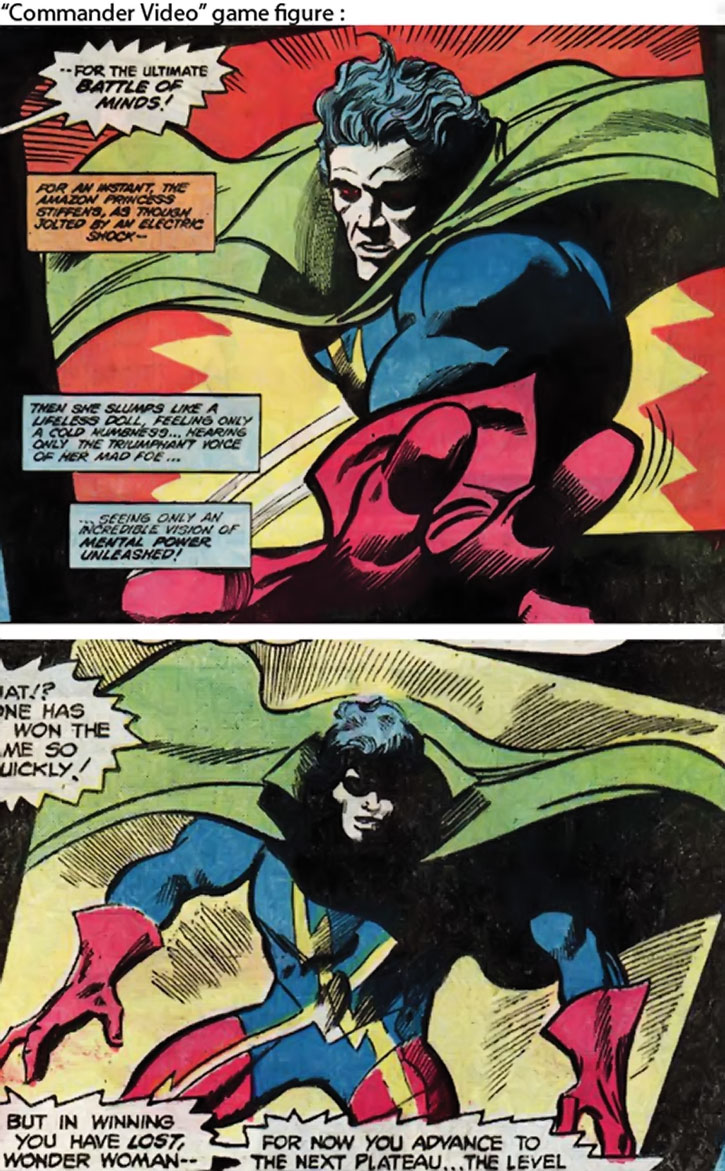 This game, apparently an excellent one, became a huge hit in a very short time. This success may have been helped by mind control circuitry hidden in the handhelds.

Commander Video became highly sought after by persons of all ages. There were even were violent incidents around stores that had run out of stock. Back in 1982, it was still considered shocking barbarism.

For the better Commander Video players, the General had a surprise in store. It occurred past a certain score, which according the the General only the most aggressive and skilled minds could beat. A telepathic bridge would be established with the Japanese mastermind’s electronic brain.

Winning this duel of wills allowed the General to take control of the player. His first victim was the warden of the prison.

With the Commander Video craze sweeping across the US, the General soon had numerous servants. These included one fellow General from the US Air Force and the villainous Blockbuster (Mark Desmond).

With such allies, General Electric (called Commander Video by most of his thralls) had nuclear missiles stolen or requisitioned. He had these brought to the penitentiary, which he now entirely controlled.

Wonder Woman quickly became a thorn in his side. She stopped Blockbuster as he stole missiles, realised that the USAF General was being controlled, and flew to the penitentiary to stop the plot. ”Commander Video” had a small nuclear missile shot at her. But WW deflected it high enough not to kill innocents.

However, this heroic tactic knocked the Amazing Amazon out, and she was captured. Binding her wrists, the villain forced her to play the prototype of his next game so he could take control of her.

That didn’t work. Wonder Woman’s superior willpower and fighting spirit won the day against the General’s electronic brain. Furthermore, the intervention of Steve Trevor prevented him from trapping her mind within the game as revenge. General Electric’s conspiracy was stopped, the games destroyed and the remaining missiles repossessed.

The General has not been seen since. It is possible that he no longer existed after the Crisis on Infinite Earths, being something of an embarrassing character.

His approaches have a slight militaristic and technophilic slant to them, and he’s convinced that his enhanced brain is superior to any organic noggin.

“For 30 years we have lived with our wounds and deformities because of your war machines. Now we have the chance to strike back !”

“Now it is your turn to play, Wonder Woman ! And once you have succumbed to Commander Video, none will doubt my power !”

This writeup assumes that the Mental stats for Wonder Woman in the 1st edition DC Heroes roster book were accurate. 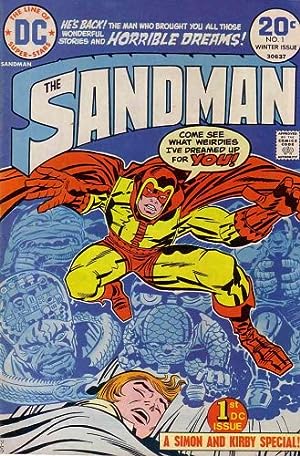 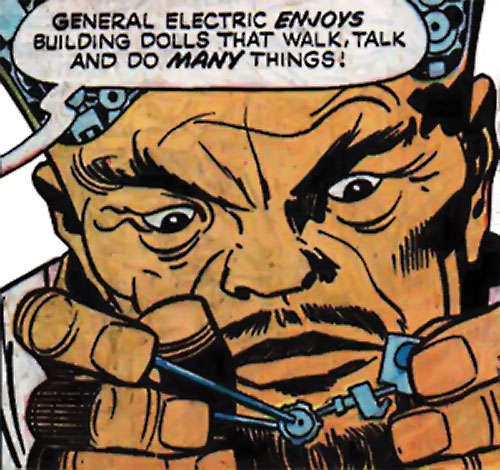 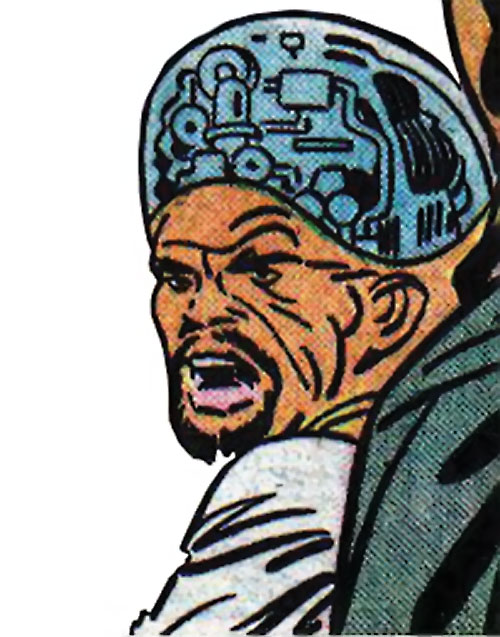 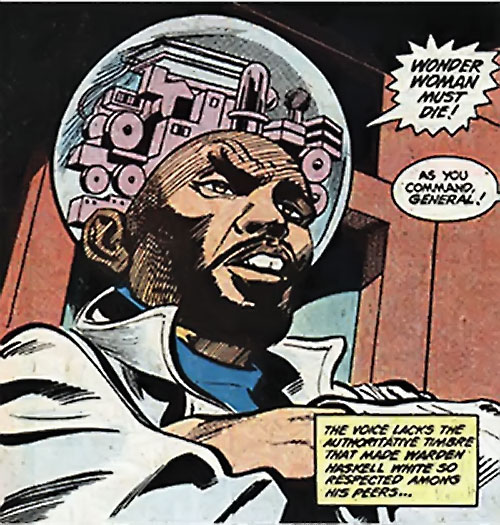 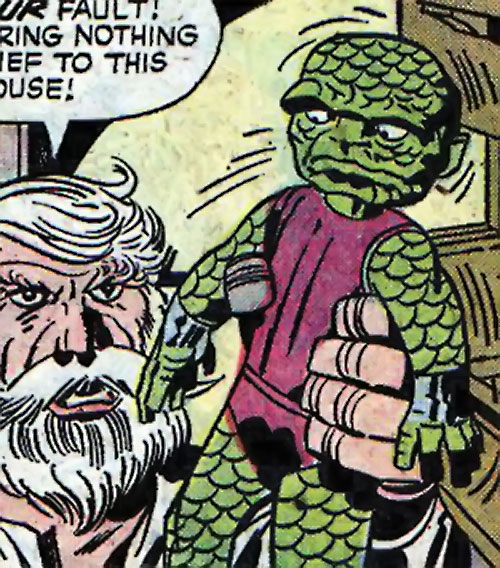 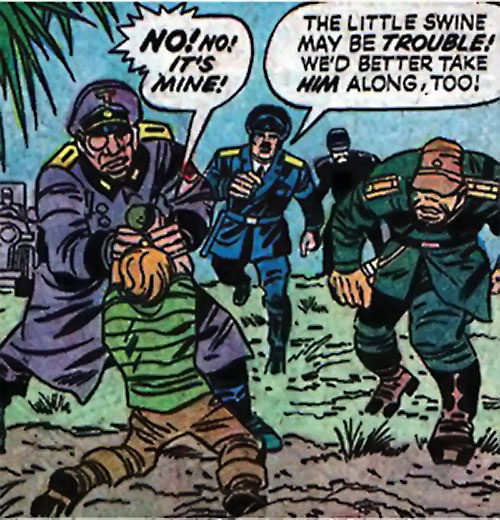