The General is monstrously strong, extremely fast and nearly unstoppable. He feels no pain. Even the JLA has to resort to tricks against him, direct physical combat being useless.

His regenerative abilities are ridiculously high. He once completely regenerated when only an arm was left of him. It is common for attacks to look like they’ve damaged him a bit and drawn some blood, only to have these effects erased within a few seconds (in DC Heroes RPG terms, he didn’t take any RAPs – it’s a cosmetic effect that’s baked into his BODY score).

The General’s powers and the Shaggy Man’s powers are different. The General does not have defensive-adaptive abilities, and regenerates much faster. He’s also a lot bigger, heavier and stronger. The reason for those differences is unknown.

Maverick US Air Force General Wade Eiling had a long history of abusing his authority to achieve his own insanely nationalistic ends. He was heavily involved in the ill-fated Captain Atom and Major Force projects, which he started and commanded. He also created and commanded at least one version of the Suicide Squad.

Some time after the “magnificent seven’ version of the JLA formed in the late 1990s, General Eiling discovered he had an inoperable brain tumor. He nevertheless spearheaded the Ultramarines Project – supposedly a metahuman force designed to serve American interests.

In actuality, it was a well-organized scheme designed to distract and eventually destroy the JLA. This way, Eiling could steal the Shaggy Man android.

The distraction worked. Eiling was able to transfer his mind into the unstoppable machine. Once in his synthetic, self-regenerating body, Eiling shaved off his coat of fur and christened himself The General. He intended to use his newfound power for global conquest.

However, the JLA was able to turn the Ultramarines to their side. Together, the two teams attacked the General and managed to exile him on a remote asteroid.

A few months later, as his hate and rage grew, the General was saved from his exile. At the request of Lex Luthor, Zazzala, The Queen Bee, found and rescued the General. Luthor offered him membership into a new Injustice Gang and promised him a chance at revenge.

Eiling and the Queen Bee then laid waste to the JLA Watchtower. They sneaked in via a dimensional transporter linked to the Still Zone, aka Limbo, to which Prometheus had access.

While the Queen Bee then directed her efforts towards securing Earth, the General engaged Steel, Superman, Orion, and Sturmer (Orion’s “hound”) on the moon. They were evenly matched against the General’s might until Sturmer sacrificed himself taking the General into exile yet again, this time in the endless void of Limbo.

The General remains trapped there, presumably locked in endless combat with the vicious hound of the New Gods.

General Wade Eiling was a devious, manipulative military officer. Under the guise of a patriot, Eiling was a power-hungry, headstrong leader. He exhibited great cunning and a sharp tactical mind during his operations.

However, since he transferred his mind to the Shaggy Man android, he has lost much of his more sophisticated reasoning. Especially after his exile on the asteroid, the General’s personality has been driven almost solely by rage and revenge.

Bonuses and Limitations:
Density Increase and Growth are Always On and already factored in (-1) 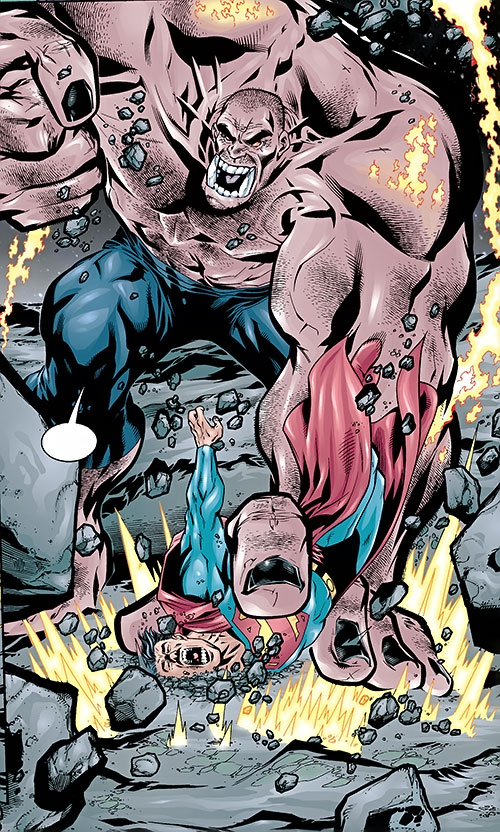