General Ross has studied and practiced the military art his entire life. He’s well versed in military history and his long history as an active soldier has learnt him combat (both armed and unarmed) and his military skills are without peer.

Another of Ross’s valuable assets are his many connections which were used for hunting down the Hulk. Although he couldn’t handle a defeat well, he possesses a rarely seen strong dedication and force of will.

Extremely long history. I recommend reading the entry on him in the OHOTMU , vol 10, if you’re interested in a history of greater detail.

General Thaddeus E. “Thunderbolt” Ross, who became the most frequent nemesis of the superhuman monster called the incredible Hulk, was born into a family with a proud tradition of military service. As a boy Thaddeus Ross immersed himself in the study of military history. As a young man Ross enlisted in the military and graduated first in his class at West Point.

During the WW II he was a Captain in the Pacific theater of operations. He made a great work and got the nickname ’Thunderbolt‘ since he struck like a thunderbolt when leading his men into action. At the end of the WW II Ross had risen to the rank of Major.

After the war he was stationed at Los Alamos, New Mexico. There he met nuclear physicist Brian Banner, the father of the future Hulk. When the Korean war began Ross had risen to become a Colonel and during that war he served to become a General.

After the war Ross was stationed at Desert Base, New Mexico which was a missile base and a nuclear research center. During this time he also became the father of his daughter Betty Ross.

Many years later, after Betty Ross had attended a boarding school, she returned to the base to live near her father. During this time Robert Bruce Banner, a genius in nuclear physics, was sent by the United States Government to supervise the construction and testing of his invention the ’gamma  bomb‘.

Ross felt great discontent that a civilian was in charge of the project. Furthermore he personally disliked Banner since he was unathletic and intellectual, thus failing to live up to Ross’s own vision of true manhood. During the initial testing of the bomb the accident that turned Banner into the incredible Hulk occurred.

After this came many years during which Ross learned the Hulk’s true identity and the long hunt for the Hulk that followed. Ross tried extremely many times and in many ways to capture and finally destroy the Hulk, but they all failed in the end. During the years he among other things :

Finally General Ross was finally overwhelmed by shame for what he had done and decided to attempt suicide. He, however, disappeared from sight instead and became a drifter.

Later during the wedding of Betty Ross and Bruce Banner he appeared at their wedding and demanded that the marriage would not take place. During this Rick Jones was wounded by a gunshot, but Betty convinced her father to let the marriage continue.

Ross was placed under psychiatric care, but soon Ross’s old ally Clay Quartermain of the S.H.I.E.L.D. enabled Ross to participate in an experiment to transform him into a superhuman being by infusing him with some of the living electricity of the being called Zzzax.

The experiment went wrong and instead Zzzax absorbed the consciousness and psionic  energy of Ross. Ross’s mind, however, managed to take control over Zzzax and he tried to kill Bruce Banner and the then temporary-Hulk Rick Jones. When Banner forced Ross to recognize that the latter’s mind now occupied a monster’s form, the Ross persona was horrified and fled.

Later, Ross managed to return to his own physical body together with some of Zzzax’s energy. Later, an unnamed mutant attempted to take over Gamma Base. During this Ross watched the Rick Jones Hulk be defeated by the mutant and Bruce Banner who hurled himself in front of the mutant in an attempt to save Betty.

Ross finally realized that he had gravely misjudged the character of both men.

When the mutant defeated Banner Ross himself hurled in to protect his daughter. The mutant got killed when Ross released the remaining energy he had from Zzzax, but the strain was too much for his aged body. Telling Betty he had been wrong about Bruce and that he himself loved her, Thaddeus Ross died in his weeping daughter’s arms.

His corpse later turned up in an armor, being an henchman, of the Leader.

Ross appeared to be a proud and strong military man in full general’s uniform. He had a white moustache and white hair and was always seen giving orders to his fellow soldiers while standing tall. Ross appears to be a stern man and it’s clear that he won’t take orders from no one ; he’s the one around in charge.

Ross often shouts orders around, even to those who aren’t under his command.

In his youth he was a real wildcat on the battlefields. In his elder days he still remained a tough, strong soldier.

During his entire life he believed in the life of the soldier. That was the only acceptable way to live for a real man and civilians were often seen as weaklings. He’s quite archetypical in his manners (like a General in an old military film) and will always act the part. Simply put he’s a no nonsense kinda guy.

He did want the best for his daughter, but often failed to show that.

Most of his older days were spent on the long hunt after the Hulk ; a hunt which finally reached fanatical proportions. For long, Ross despised Banner who the weakling that he thought he was and hated that his daughter and Banner were a couple. At the end he realized his mistake on characterizing Banner.

Ross was, despite his hard exterior, a good man, who wanted the best for the American people and his loved ones.

Still, he’s neither flexible nor creative. Although he was probably an excellent tactical thinker in his youth, too many years of doing things by the book have severely blunted his ability to devise original solutions. He sticks too much to the tried and true methods – especially the “hit him with all I’ve got” tactics.

Ross is an important part of the Hulk mythos, but that doesn’t stop him from appearing as a stern general in any DC Universe set campaign. He’s after all quite stereotypical and makes well for the effect of a powerful general.

His obsession for destroying the Hulk could easily and temporarily be changed into any other destroying behemoth ; Doomsday or Godzilla, as examples, would be perfect preys.

Equipment:
Usually some sort of standard military gun, a Hulk busting gadget and an army !

Source of Character: The Hulk Comics. 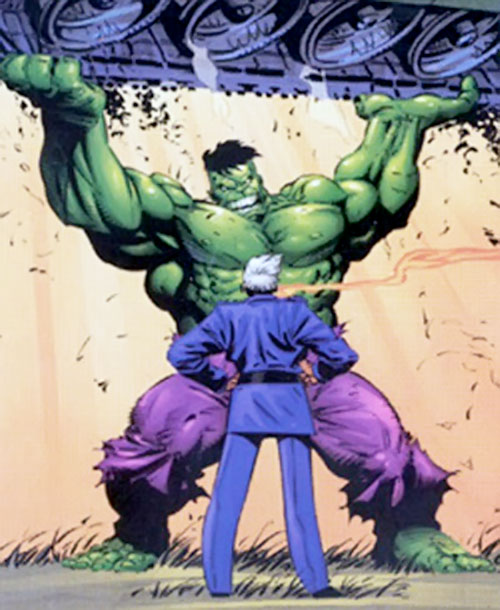