The M.A.N. from S.H.A.D.O.W. is an android (actually a small army of them). It is modelled on the original General Sam Softly so as to embody the authority figure cliché nobody questions.

While it doesn’t usually fight in front of witnesses, it is extremely strong and durable, and can fire beams of energy from its eyes.

Following the brief success of the super-soldier program during the war, a number of similar experiments were attempted. This included the Super Human Development and Operation program.

Led by General Sam Softly, S.H.D.O. worked towards the idea of creating squads of temporary super-soldiers. These would be placed in each of the 48 states, to protect folks. The program ended with a lab accident in 1957, during which General Softly died.

Using abandoned S.H.D.O. facilities for his own experiments, Ezekiel Stane used Softly as the model for his military man android, intended to project an aura of authority. This would allow him to command soldiers from nearby bases as Stane continued his experiments.

He came into conflict with the Order when retrieving the Infernal Man for Stane. He continued facing them in escalating scenarios. They soon learned his true nature, and that there was more than one of him. 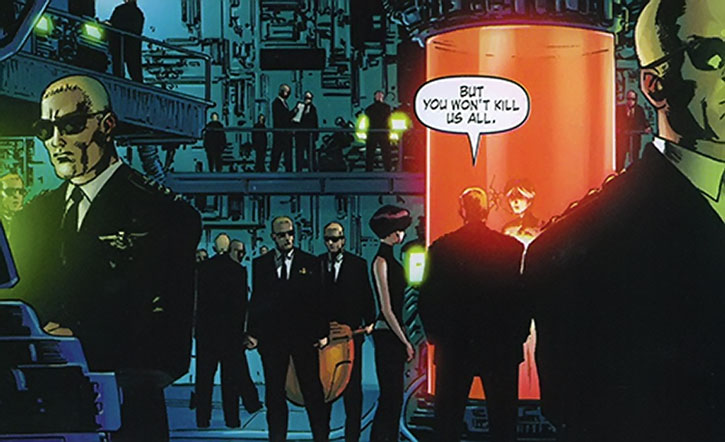 During Stane’s final attack on LA, Softly androids moved through the city. They stirred up animosities and ordering people to attack other groups he labelled un-American.

His activities since then are unknown.

Official and arrogant, Softly throws orders about even at those he knows won’t follow them. He’s absolutely confident in his authority because he’s been programmed to be that way.

He won’t back down from anything.&emsp.But he tries to avoid engaging in combat where there’s a chance of his true nature becoming public knowledge.

“I need you and your people to stand down or I’ll have you shot as, I don’t know, enemy combatants or some such.”

“Jurisdiction ? Yeah, that’s where I stop listening and caring.”

“Now, now. Language. I’d hate to set a bad example for our girl with foul talk and untoward thought.”

“I’m afraid the order’s come down to terminate with extreme prejudice. For crimes against the good of mankind and God and the American people. You’re a regular Johnny Walker Taliban, ain’t ya??”

Writeup completed on the 4th of December, 2011. 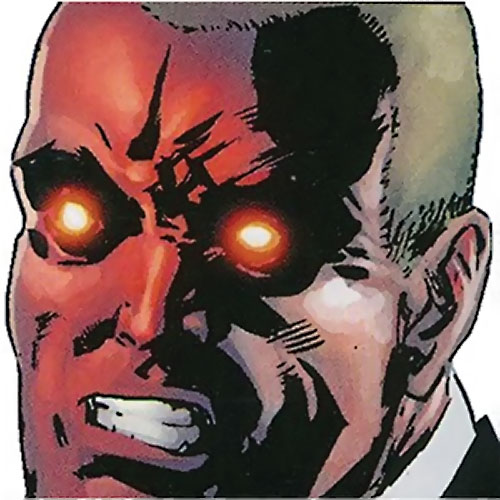 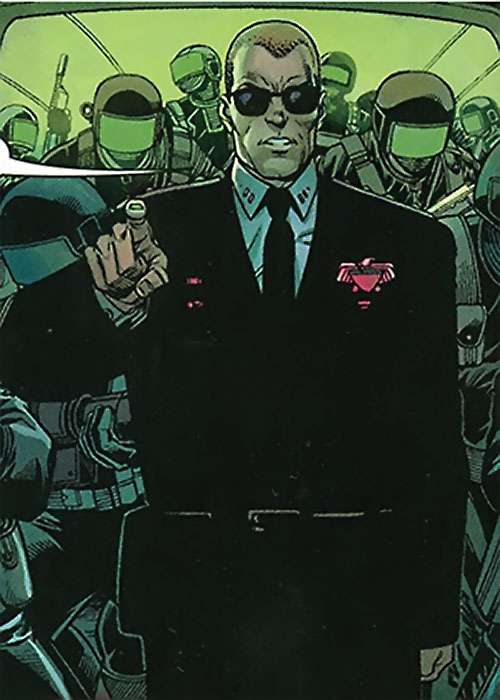