Despite his tender age, The General is smart and knowledgeable about strategy and tactics. He can plan and lead operations far above the capacity of most adult criminals, melding force, subterfuge and manoeuvring.

Storming a National Guard armoury and absconding with several attack vehicles loaded with weaponry is the kind of operation the General can routinely set up and command.

He also has a remarkable memory, and an excellent study. He has devoured whole shelves of books and magazines about the military.

Armstrong also is a good shot with a gun.

Little Ulysses Armstrong was always trouble. Furthermore, he was fascinated by armies, warfare, weapons and strategy ever since he was a tot. He proved impossible to raise, and was eventually sent to the Valley Pines military-style boarding school.

However, he was much younger than most other students and spent his time in the library. These factors put him at the bottom of the pecking order. Armstrong broke down at age 11. He fled Valley Pines after torching most of it as retaliation.

Still fixated on military history, the kid intended to set himself up as a warlord. He located the Bengal Street Raiders, a very weak street gang. He offered to lead them to a cache of weapons. Armstrong’s plan for pillaging a National Guard armoury worked smoothly. The kid then gunned down the gang’s boss, assuming leadership.

He then renamed the Raiders the War Dogs. Armstrong prepared his campaign while turning the gang into a paramilitary force.

Of course, you know that this means war

The War Dogs clashed with the Batman as they led a frontal assault with Hummers and mounted machineguns on the Oh-Gees. The Oh-Gees were the gang to which the War Dogs used to pay tribute. The clash was inconclusive. The General escaped, and Batman was wounded by the armour-piercing ammunition used by Armstrong’s troops. 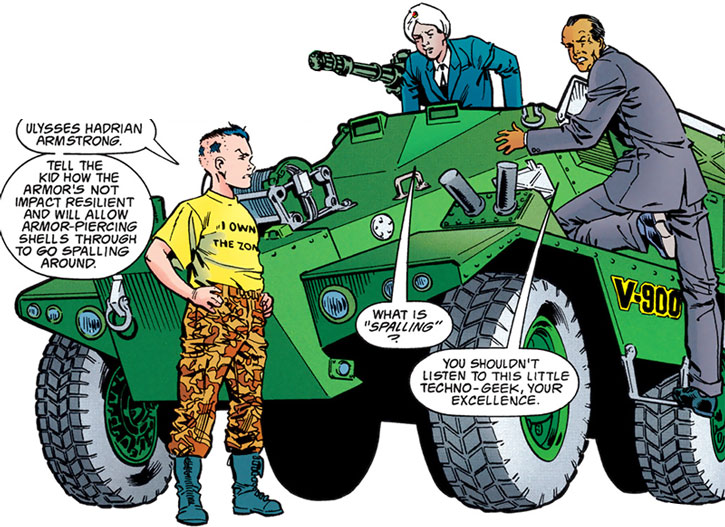 The General then started uniting gangs as units of the War Dogs army. He intended to replace the traditional mob in Gotham during a winter campaign.

Armstrong’s army took down the biggest gang, the Bad Boy Runners. During this battle, Batman was believed killed.

The General’s next target was Black Mask, who was then thought to be Gotham’s kingpin of crime. However, Armstrong soon learned the Black Mask was believed dead. With so many opponents out of the way, the General was free to move up on his list – to take down the GCPD.

The General led his forces, armed to the teeth, in a well-prepared assault on the H.Q. of the 43th precinct. They trapped the whole police station in a deadly siege. By the Batman intervened and broke the assailants. The General and his army were sent to prison on various charges including murder, assault, weapon possession, etc.

The General was released within a year due to good behaviour, his age, and prison overpopulation. Now aged 12, he was reflecting on his next plan when he ran into Julie Caesar. Caesar was one of Maxie Zeus’ delusional henchmen, with a Roman fixation. By that point, he was a homeless weirdo in a toga.

Using his excellent knowledge of Roman history, Ulysses quickly became the ally of Caesar. Julie could be his adult frontman, since the pint-sized Armstrong had a credibility problem.

The pair quickly adopted a Roman theme, recruiting loser gangbangers and outfitting them in uniform. They even kidnapped a lion for their arena – actually the basement in Armstrong’s parents’s home.

The pair even attempted to divine the future by reading the entrails of Binky, the Armstrongs’s small dog. But this plan was thwarted by Ulysses’ furious little sister.

Hadrian and Caeasar led their troops in an assault on the stronghold of the Vandals street gang, appropriating their loot. However, Robin (Tim Drake) and Sheriff “Shotgun” Smith intervened, forcing the pseudo-Roman troops to flee.

Caesar and Armstrong ran into cops. But The General pretended to cry and Caesar pretended that he was his guardian, and they slipped away in a police car. The stratagem failed after Robin and Smith arrested them.

The General then forged a short-lived alliance with the Toyman in order to steal rare military toys. These had been designed by the Toyman decades ago, and now were valuable collector items. Robin stopped them both then prevented the Toyman, who hated kids with a passion, from killing the General.

This wasn’t the end for the General, however. After getting out of the correctional facility, he met Ali Ben Khadir, the Rahfi of the Karrocca Emirate (aka Dhabar) and a fellow 12-year old. They met at a military hardware demonstration, since Ali wanted to invest in his country’s defence to deter the Quracis.

The two boys became close friends. Hadrian advised Ali in his defence choices before deciding to spend summer in the Emirate.

Once there, he convinced Ali to launch an assault on a Qurac-backed Karrocan rebel faction. This triggered war between the Emirate and Qurac. Armstrong was excited to lead his first war. Especially since the area was under a UN-enforced no-flight zone, posing various strategic challenges.

It didn’t go well. The rebel mullah had hired four mercenaries to supplement his forces – Gunhawk, Hatchet, NKVDemon and Deadline. All were superhuman and/or equipped with unique weapons. They ploughed a path through the opposition, and Armstrong was soon on the defensive.

Never start a land war in the Middle East

Things became heated. Armstrong gunned down several Dhabar officers who disagreed with his reckless strategy. This led to a brawl with Ali.

Ben Khadir ordered him thrown into a dungeon. But Armstrong had double-crossed Ali and made a deal with the super-mercenaries. He had offered them a permanent cut on the Karrocan GNP if they switched sides to him. Ben Khadir was now his prisoner.

Robin and Nightwing then intervened, turning the flow of the battle with a daring maneuver. Armstrong was captured by Ben Khadir. The General is now a prisoner in Dhabar, scrubbing the floor of the palace.

Armstrong usually dresses in kid-sized battle fatigues, with matching T-shirt and combat boots. But he also has an inexhaustible supply of miniature uniforms, from Patton to Alexander or Napoleon. He enjoys dressing up in those uniforms for some of his sorties.

Ever since his alliance with the Raiders, he has had his hair shaved on the sides, with three stars on each side.

At first, Armstrong was portrayed as a cold, sinister, precocious sociopath. He was a casual killer with a very strong fixation on battle.

He then started to be portrayed as more of a weird kid. The General was still dangerous and obsessive, but with a clearly comical and over-the-top side. Stories involving him are a surreal mix of military strategy, everyday kid life and Gotham madness. Yet he still can kill without batting an eye.

The General now speaks in a clipped, military-style, formal manner. He acts as if he’s a superior officer and employs a lot of military terms. His speech is pompous, which is made even worse as he liberally uses tons of quotes from great military leaders.

He’s still quite able to convince grown-ups that he’s a dangerous menace and a viable leader, though.

He greatly enjoys making detailed models of the places where he will conduct his operations, so he can war game. He’s also an avid and knowledgeable collector of toys and books having to do with the military.

“‘In war, the only sure defense is offense’ – General George Patton.”

“‘Between a battle and a battle lost, there lie empires’ – Napoléon.”

“‘Something must be left to chance, nothing is sure in a fight’ – Lord Nelson. And he was an idiot. I’ve prepared for every contingency.”

“State-mandated limitations on detention populations combined with my own model behaviour secured my early release. I’ll expect dinner at 1800 hours.”

Equipment:
Ulysses owns an incredible array of military reenaction costumes, all child-sized. He will sometimes use OSP  weaponry, and sometimes packs a .45 pistol [BODY 04, Projectile weapons: 04, Ammo: 07, R#02]. The .45 may be there even if he’s dressed wrong for it (say, as a Roman centurion). 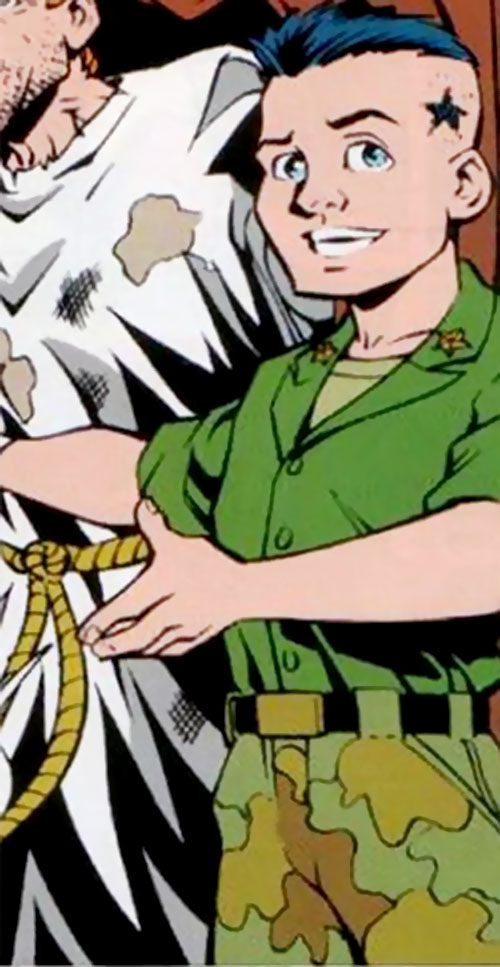 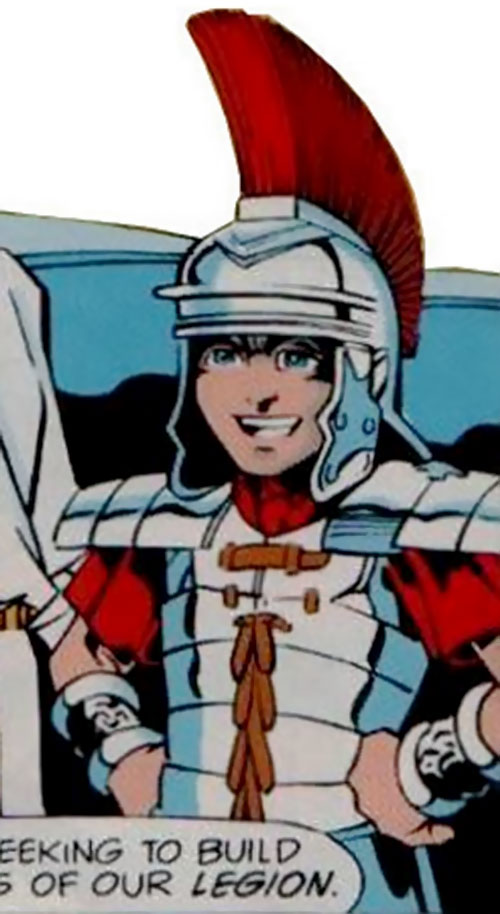